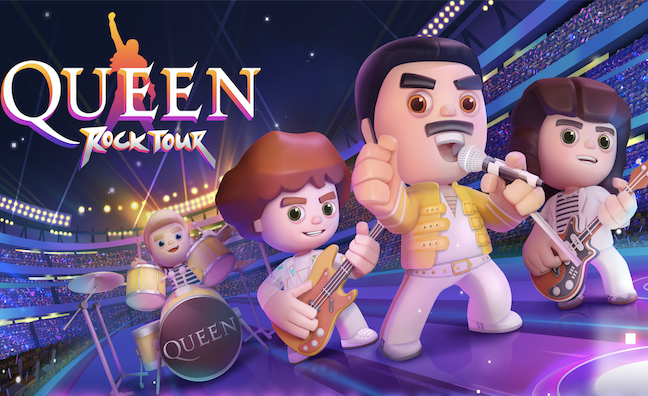 Queen have announced their first official move into the gaming world with the launch of Queen: Rock Tour, a new game for Android and iOS devices.

The game arrives 50 years after the legendary band completed their classic line-up by recruiting John Deacon, in a year in which Queen were due to play a 29-date stadium and arena tour, which has now moved to 2022. Queen joined TikTok last year.

The game will allow players to play along with catalogue of Queen classics in different venues around the world. It was created by Universal Music Group, Hollywood Records and Gameloft for brands.

Andrew Kronfeld, executive vice president, marketing at Universal Music Group said: “Today, Queen are globally recognized as one of the most iconic and important bands in history. Decades after their first live shows together and following on from the huge worldwide box office success of the Bohemian Rhapsody biopic, their popularity continues to grow every year. We hope the launch of Rock Tour will introduce their inimitable rock legacy and catalogue to a new generation of fans, through this unique new gaming experience.”

Ken Bunt, president, Disney Music Group said: “We are excited to partner with Queen, UMG, and Gameloft to let Queen fans experience the bands legendary music in a new way.”

Cedric Ratajczak, creative director at Gameloft for brands, said: "Our ambition was to push the boundaries of music and gaming with a fun and rewarding experience that would put players in Queen shoes at pivotal points in their career and make them perform in real-time Queen's live music unlike ever before.  The creative challenge was to modernize the traditional rhythm-game genre with innovative and mobile-friendly twists inheriting from hyper-casual gaming, and with a unique and happy visual style that offers a timeless look to the band, appealing to the new generation of players.”

Ratajczak added: “We devoted enormous attention to the details of Queen’s history, authenticity and artistry to craft a fitting tribute to one of the most significant bands in rock history and aim at setting new standards for how band-focused music games could be executed on mobile today."

In last week’s official UK Top 40, Queen’s Greatest Hits hit No.6 with 4,708 sales, its highest chart placing as a standalone release since January 1992 in the aftermath of Freddie Mercury’s death. It has now completed its 34th week as a Top 10 record and 664th week overall on the Top 75.