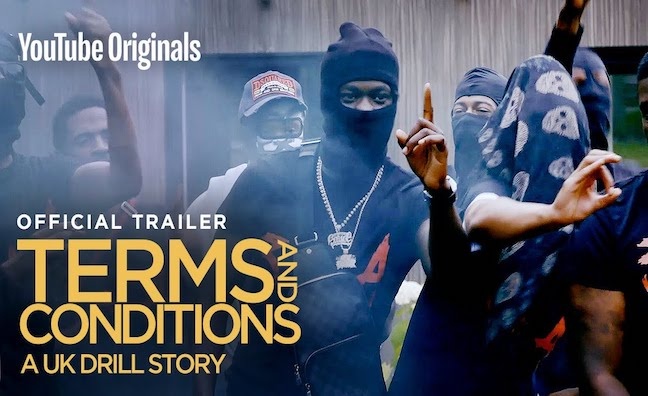 YouTube Music’s Luke Hyams has underlined the platform's responsibilities when it comes to drill music as a new documentary is launched.

Terms & Conditions: A UK Drill Story launches later today (February 26) and features a range of key names associated with the scene including Skengdo & AM – who were sentenced for breaching a gang injunction early last year – Drillminister and Lavida Loca. As well as artists and producers, the documentary includes contributions from community figures; lawyers, the police and family members who have lost loved ones to violence.

Hyams is YouTube Music’s head of originals, and he told Music Week that the team endeavoured to explore every angle while making the film, which was directed by BAFTA winner Brian Hill, produced by Kandise Abiola and overseen by drill expert Andre Montgomery-Johnson.

“Youth violence and gang culture are challenging areas, deeply rooted in a number of social and economic issues. As such, tackling it requires a really diverse range of groups, each bringing their own expertise to bear,” Hyams said.

Hyams stresses that YouTube is pushing for for a better understanding of drill. “We champion YouTube's power as a platform to transform lives by allowing users to broadcast their creativity,” he said. “But we recognise that this comes with a great responsibility to make sure that power is harnessed for the right ends.”

Music Week published an investigation into drill at the end of 2018, when Headie One, the management team behind 67 and BBC Radio 1Xtra’s DJ Target were among those to voice their opinions. Since then, its impact on the music industry has increased, with Headie One having cracked the Top 10.

YouTube’s new film seeks to shine fresh light on drill and, with that in mind, we sat down with Hyams to find out more.

How can YouTube help facilitate the debate around drill?

"We’re looking to tell real stories about people or topics that touch or relate to YouTube and society. This film explores the cultural impact of drill music and its relationship to youth and gang violence in the UK. This topic is incredibly complex and is deeply personal to so many in Britain, who are either part of these communities or have been touched by violence. To explore it effectively, we partnered with Century Films and BAFTA Award-Winning director Brian Hill to investigate drill as a musical and cultural phenomenon. The documentary also examines the association between drill and knife crime, seeking to understand what role, if any, drill plays in inciting violence in Britain.”

What can the music business do to learn more about drill's alleged associations with violent crime?

"The power of drill music is undeniable. It’s visceral, confrontational and rich, but it’s also developed a divisive reputation. As the documentary uncovers, it’s an immensely complicated issue. It really asks the question, ‘Does life imitate art, or does art imitate life?’ We want the wider UK community to see and understand that drill is an art form and it’s a legitimate business venture for many people across the UK who may not have other opportunities. We hope that the music business also sees that freedom of expression doesn’t mean ‘anything goes.’ We work so closely with labels, artists and managers so that artists understand how and where YouTube draws the line over what and what is not allowed on the platform. We do not want YouTube to be used as a platform to stoke tensions or incite violence and drill music must adhere to those same standards. We are committed to continuing to work constructively with the industry, experts and communities on this issue to be part of the solution."

Drill is visceral, confrontational and rich, but it’s also developed a divisive reputation

What was it like to put the film together?

"Doing this gave us the opportunity to give some of the most interesting young artists in the drill scene an opportunity to talk about their lives and the things that are really important to them. Though drill was the connecting unifier, we found that each of their individual stories took us down very unique paths and shone a light on a variety of facets of the London experience. Skengdo and AM explore censorship, Drill Minister spoke passionately about equality, while Lavida Loca questioned why the glorification of drugs and violence things that get everyone so excited. These sub-issues, and more, have given the film a breadth way beyond drill and have helped to cement this as a film that encapsulates the experience of living in London in 2020 for a large group of the population."

What can we learn from the film?

"That the answer is not to simply banish an entire genre of music from YouTube. Drill is a real art form and launch pad to help artists build a career and express themselves. At the same time, we hope that artists and creatives also learn more about the need to understand the power of their words and actions. We hope this documentary brings forward productive discussion across communities, artists, law enforcement and Government who have a stake in this issue and that they walk away with a deeper understanding of the issues.”