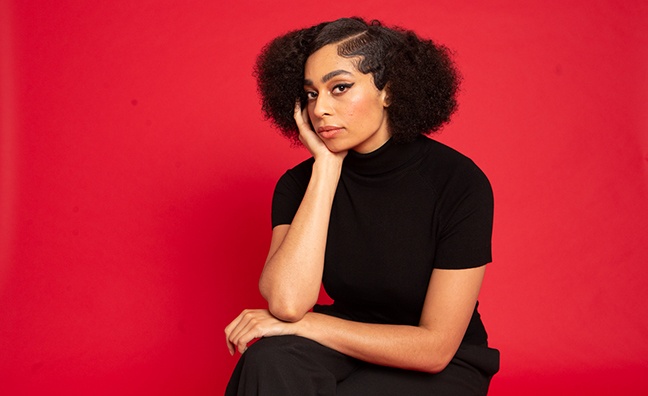 At the tail end of 2019, Music Week met Celeste to talk great expectations and hype ahead of her debut album. Now that Not Your Muse has hit No.1, revisit our conversation with the Polydor star...

When Music Week meets Celeste, she’s in the eye of the storm. Emerging from a cab into the cold greyness of a winter’s afternoon, the singer and her entourage crack jokes and laugh, manouvering wheelie suitcases full of clothes and gifts into our photo shoot. They’ve arrived from a central London hotel and, going by their stories of the presents that kept arriving for team Celeste, it’s a wonder they were able to escape at all.

You see, today is the day Celeste has been unveiled as the winner of the BRITs Rising Star award. Following in the footsteps of Adele, Florence + The Machine, Jorja Smith, Sam Fender and more, she’s the first recipient of the renamed gong. It’s fitting, then, that our cover shoot lands on the same day. We’re here to celebrate Celeste and Maisie Peters as two of the most exciting prospects 2020 has to offer.

Once inside, the pair trade stories and get acquainted, the music bangs and the excited hubbub in the background makes it feel like we’re at a kind of impromptu house party. Celeste’s manager has even brought some crisps. When you’re a brand new pop star, the freebies are never-ending.

“I’m pretty buzzing,” says Celeste, once our camera’s flashbulb has stopped popping. She relaxes back into her seat and laughs. She’s not sure what it all means, but the hype around her name is inescapable. Even so, Celeste is ice cool, she’s just happy to know that her family, which has roots in Brighton, is proud of her.

All this fuss feels like the culmination of Chapter One for the singer, who was born Celeste Epiphany Waite in Culver City,California, and moved to the UK aged three, first to East London and then to the Sussex coast. She’s been obsessed with classic records since she can remember, and namechecks Ella Fitzgerald,Serge Gainsbourg, Edith Piaf and Jacques Brel today.

Celeste’s father died when she was 16, around the time she began experimenting with music, playing in various bands in Brighton. Gradually, her songwriting style began to develop. Celeste’s songs are better described as emotional outpourings, flavoured with soul, jazz and the powerful performance style of her heroes. Her voice, smoky and disarming, will stop you in your tracks. At times during the first night of a three-show residency at Omeara last year, it seemed to stop time itself.

No wonder Polydor’s Tom March was so excited when his fellow co-president Ben Mortimer burst into his office about a year ago with a demo of Stop This Flame, which came out this month as Celeste’s second single proper. Strange, its predecessor,is her signature song, the one she’ll sing at the BRITs.

“Her voice just blew me away. It was very early, but we knew on the spot she was an artist we had to work with,” March tells Music Week. “Thankfully, that feeling we had when we first heard her voice is shared by everyone who has come into contact with her music since. As a label and as an industry, we feel we have discovered someone really special.”

After we meet, Celeste scoops first place in the BBC Sound Of 2020 list, and March is understandably delighted by the accolades, pointing to increased exposure on Apple Music,iTunes and Amazon Music as a direct result.

“We’re well aware that there’s still a lot of work to do,” he says. “We’ve only just released her second full single, but to see how it is connecting to the public is incredibly exciting. When she tours [with Michael Kiwanuka] in March, that’ll be the show everyone wants to be at. The performance at the BRITs is obviously a huge opportunity and I know she’ll deliver.”

Celeste laughs again when we ask if the hype means that the pressure is on as she begins 2020. She’s a picture of relaxation and her stories drift leisurely during our interview, which has the calming effect of a yoga class. The dreamy quality in her music is mirrored in person.

“The night before Polydor offered me a deal I had a feeling they would do it that day, really from out of nowhere,” she says,a little mystically. “I woke up and thought, ‘If someone offers today, it’s the time to do it…’”

I naturally gravitate towards love stories, tales of heartbreak

How does it feel to be so hyped?

“I bet a lot of people who make music say this, but whatever happens, you have this inner belief that you’ll eventually come on to do and achieve the things you really want to. This is just the beginning. I’m lucky to have this start where people are excited, but I’ve still got an album to bring out, that’s where the real challenge is, to finish that and then for that to be the thing that receives that critical acclaim. That’s what’s really important for me, understanding a body of work and presenting that to everyone and fans thinking it’s what they wanted it to be.”

What are you learning about how the industry breaks new acts?

“I never knew about the maths that goes into breaking an artist until I was more involved with a label. Before it was like, ‘I like making music and I’m going to keep trying to make better songs until somebody notices and says, ‘This is really good’. I’m glad it happened with Polydor, all the people there are good people and they’re all really good at their jobs. My gut said to go with Polydor from the first time I ever met them. I went and made more music, we met again and I thought, ‘Is this the right time to do it?’ They made an offer and I knew straight away to do it. There are new opportunities that haven’t existed before and I’m glad I’m in a position to grasp them.”

How is your album coming along?

“I have some songs from just after signing that I’ve always had in mind for the album. Strange will definitely be on there. I did a month and a half of writing before going on tour with Michael Kiwanuka and I’m doing more soon. I’ve been to LA and met people I really like, I never expected that would be the place I’d end up writing music because it’s kind of a cliché [laughs]. I really like working with Jamie Hartman. I grew up in Brighton and I’d seen Rag‘N’Bone Man for seven or eight years gigging with a group of boys that I knew. When I heard [Hartman co-write] Human,I thought it was a really good interpretation of Rory [Graham] in his natural habitat of a blues world, and turning that into a more commercially viable song, basically. That’s reality, you want to be creative and not think about those things too much,but when you hear it in something else, it makes you excited about going to work with that person because they’re not ignoring the artist, they’re fully taking into account who that person is and what their voice is.”

So far, your songs have all been very emotional…

“I naturally gravitate towards love stories, tales of heartbreak. But I hope I’m not heartbroken in 2020! All of the things I found most heartbreaking growing up, I still think of them in the same way,but they’re not as open and raw as they were. Father’s Son was a song I always wanted to write in commemoration of my dad dying, but at the time I found it so painful that I couldn’t really concentrate to write a song that felt genuine and wasn’t exploiting my emotions. Hopefully I fall in love in 2020 and I’ll be able to write something about that! [Laughs].”

What’s it like to put those feelings into a song?

“It’s quite cathartic and it can be a healing experience. The writing is the healing and the catharsis is the singing in front of people. When you’re really in it and you can remember how you felt when you wrote it or you still feel it, that’s the best time to sing it. That’s when people understand it better, I don’t do all this extra stuff when I’m singing, I don’t do dancing [laughs]. I just stand there and sing, so it’s really important for me to feel the adrenaline,if I’m not feeling it then I don’t think other people will. It’s important to write songs that are true to myself, if it’s not autobiographical then at least an observation of something I can understand. It’s about being sensitive to emotions, but not too exploitative of them to the point where you feel it’snot genuine. If you try to extract something you’re not genuinely feeling, then it doesn’t feel right. You have to wait for those feelings to come, and always be present in the process.”

When you’re working out your style, you naturally gravitate towards territories that aren’t familiar

The jazzier moments in your music can be quite trippy, can we expect more of that?

“That’s nice, I like weird. I really like weird stuff![Laughs]. When you’re still working out what your style is, you naturally gravitate towards territories that aren’t necessarily familiar for you, and definitely not for other people. You can sometimes make stuff that is completely terrible, and then you’ll have a day where you’re glad you pushed yourself and those around you and you make something you think is worthwhile and special. And hopefully it’ll stick around and people will listen to it for a while. That’s always been my aim.”

At some moments during your shows, it feels like people are waiting to breathe while you hold a note. What does it feel like to sing those parts?

“I practise quite a lot and sometimes I practise the way I sing on the records and then imagine what other parts I could sing. I always feel a bit shy to do it in rehearsal, which is silly. Sometimes, I do it by myself, I think it through and then go, ‘I’ll try it and see how it goes’. It’s always quite nerve-wracking. It takes a lot of confidence. I have to feel in the mood,like I’m definitely going to be able to do it. It’s exciting when you get that instant feedback from the crowd.”

“A No.1 album would be cool... I guess I’ll try and be normal. Obviously I’m not famous or anything,I’m a normal person, I just do something different.”