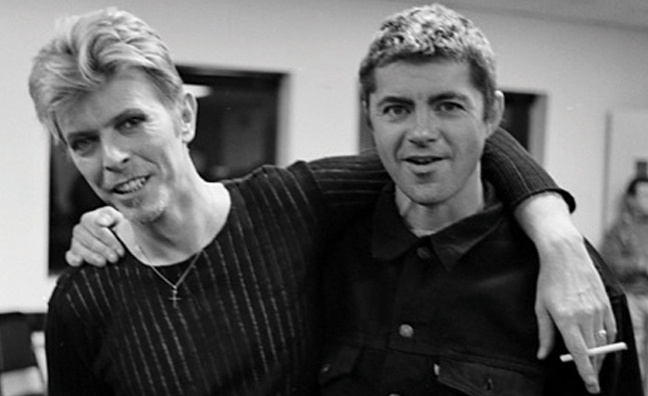 Alan Edwards, founder of the Outside Organisation, spent 35 years as David Bowie’s publicist and now works with the estate. Here, to mark the arrival of the new Moonage Daydream film, he recalls their “intense and exciting” working relationship…

Can you recall your first meeting with David Bowie – what impression did he make?
“It was in 1981 at the Carlton Towers in Chelsea. I had a brief meeting with David and Coco [Schwab, long-term PA]. But my first proper and much more extensive meeting was at his office on Fifth Avenue in New York in, I’m guessing, 1981. The meeting actually went on over a couple of days and he was forensic in his questioning. But at all times he was charming and friendly. David was very interested in the people I knew, who I’d worked with in the punk world, who were up–and–coming journalists – people like Tony Parsons and Dylan Jones. He wanted to know how I approached media, what I thought about certain publications and how best to generate good coverage. He wanted to know my ideas – he wasn’t one of these ‘stay in your lane’ type of artists who just wanted a publicist that merely followed orders. He absorbed ideas and information from everyone around him and then decided on a strategy. He was very clear but also decisive and flexible.”

In what ways did he surprise and inspire you? What did you learn from him?
“David had an enormous influence on me. He really was a teacher and he loved to share knowledge. For instance, he particularly enjoyed recommending books. He turned me on to so many writers that I probably wouldn’t have read otherwise. I remember when, during a break on tour, David took a few of us to the Vatican. It was a small party including Coco and myself. David was passionately explaining each painting and how the Medicis financed them and so on. Passing tourists thought he was an art historian. he was so low-key and even academic. They had no idea he was David Bowie, the rock star!”

How would you describe your relationship with David Bowie over the years?
“Working with David was intense at times but very exciting. You never knew what new project was going to be around the corner. One day he called up and asked me to attend a board meeting in his place at the influential art magazine Modern Painters. Another time he asked me if I could collect an art student from King’s Cross Station and drive him around for the day. We had a hilarious time screeching around in my old Merc buying medical equipment. It was only later I realised that the artist was Damien Hirst and he was putting together a display at the Pharmacy. Something extraordinary was always about to happen when David was around.”

The important thing to him was to move on to the next adventure, which he did at the speed of light

Was he good at analysing his own work and cultural impact?
“David was deeply media savvy – he absolutely understood and enjoyed working with the media. He was interested in all aspects of communications, from television and newspapers to the internet, of course. It wasn’t a chore to him. When doing interviews, he prepared like the consummate professional he was and always had questions; Why are we doing this? Couldn’t we do that publication? How big is that magazine’s circulation? It brought out the best of you – you always had to be switched on as a PR. He loved the art of writing and journalism and he had great relationships with many journalists. David was always a believer, endlessly optimistic, totally positive. He could see further ahead than everyone else, sometimes so far ahead of the curve the rest of us couldn’t see what he was getting at. But now and again some project wouldn’t work, and he would be brutally honest with himself. He wouldn’t instigate a blame game. He would just self–assess very quickly. The important thing to him was to move on to the next adventure, which he did at the speed of light. There would be no recriminations or long, sulky periods.”

Can you reflect on the experience of working on the final album in 2016?
“The Blackstar campaign really felt like it was something significant from the very beginning. Of course, it ended up being so important. None of us knew then that it was going to become part of rock history. I often think back to my last meeting with him not long before the release of that record and smile at some of the stories we traded.”

You continue to work on the catalogue – how important is that in building on his legacy?
“I would say David is the UK’s most influential artist of all time. I always think if I came back to life hundreds of years from now there would be Bowie recitals, holograms, new books, reissues and retrospectives. I think he is part of the canon of the culture of the human race. Working with David could be challenging – his ability to switch styles and change atmospheres took some keeping up with. There’s so much wonderful work in his catalogue, and I know Guy Moot [Warner Chappell CEO] and Bill [Zysblat], Tom [Cyrana] and the team at RZO will ensure that his legacy is carefully preserved and constantly reimagined.”

Our exclusive online Bowie Q&A with Guy Moot is here.