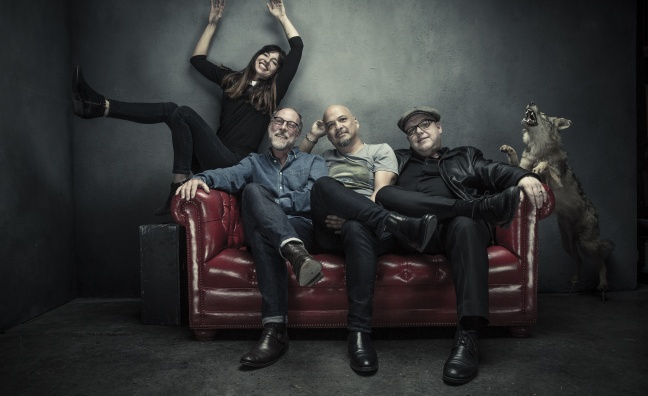 When Pixies exploded on to the scene with their seminal mini-LP, Come On Pilgrim, back in 1987, few could have predicted the enduring influence they would leave upon the alt-rock landscape.

From day one they were revered for their blistering, and often bruising, live shows. Combining stadium-sized melodies with breakneck surf rock riffs, their sound was typified by front man Black Francis, aka Charles Thompson, whose maniacal, often volatile performances electrified and terrified audiences in equal measure.

Over the next five years, the band would record another four albums that would set the template for much of the indie/grunge scene that followed. Surfer Rosa (1988) and Doolittle (1989) were immediately heralded as cult classics, while Bossanova (1990) and Trompe Le Monde (1991), though not received with quite the same fervour, have nonetheless been vaulted into the canon of indie staples.

The group crashed and burned after the release of Trompe Le Monde, as inter-band relations grew increasingly fractious, particularly between Thompson and bassist Kim Deal.

The band subsequently split, only to reunite over a decade later in 2004 to rapturous response. A mammoth greatest hits tour ensued, with a seemingly endless cycle of tours and festival appearances running for the best part of 10 years before any new music – bar standalone track Bam Thwok – saw the light of day.

The writing and recording process wasn’t without its tribulations, with tensions between Thompson and Deal bubbling to the surface once again, eventually culminating in the bassist’s departure from the band.

The album has sold 32,244 copies to date and was met with mixed reviews upon release, as critics cited Deal’s absence as detrimental to the overall sound of the record.

Two years and a couple of personnel changes later – Kim Shattuck, formerly of punk rock outfits The Muffs and The Pandoras featured briefly in the line-up – the band is once again complete.

Paz Lenchantin, who previously played with A Perfect Circle, Zwan and Queens Of The Stone Age, has now been installed as a fully-fledged Pixie alongside Joey Santiago (guitar) and David Lovering (drums).

And, according to Thompson, the band’s transitional period is now well and truly behind them.

“I don’t want to sound like I’m speaking in derogatory terms about Indie Cindy,” he says. “But when we started to make that record, it was rife with anticipatory tension.

It could have been the death of the band or it could be universally well-received. But we always knew it was never going to be totally one or the other. It would be something in between.”

Thompson also believes that the decision to see the album through despite Deal’s departure was the correct one.

“We could have waited until we found a new member, but it was almost like we had to make Indie Cindy before we brought in the new person,” he insists.

“We were in bed with these songs, so we needed to sign off on them. Kim would be noticeably absent, so we didn’t try to replace her at the time, because it felt more legitimate to have that element missing, as opposed to trying to replace it.

I don’t think we could have arrived at where we are right now, had we not done that.”

“We had mixed reviews for Indie Cindy and had the Kim Deal issue to deal with but, at the end of the day, it was still a very good record and, over time, people have come to acknowledge this,” he says.

“As we approach the new album, it’s great to see the band feel and look as if they are in a very good place. You can hear this on the record, and you can certainly see it in the live performances.”

Now, with Lenchantin as a permanent member, Thompson feels that the group are once again a complete unit.
“When she came in she was immediately right,” he explains. “It was like, OK, now we’re a band.

Her personality is different to Kim Deal’s, but she really fits in. It’s like, she’s our other sister who we didn’t realise was there all along. She’s a bit younger than us, she’s in her early 40s, we are in our early 50s, and she’s very excited to be in the group.

She brings a lot of commitment and is very well versed in the Pixies back catalogue. If you look at her iPhone, the only thing she has on there is Pixies, so she knows what we sound like, what Kim Deal sounded like. She’s very deferential to that; she’s not trying to change all the rules.

Free of the difficulties that permeated Indie Cindy, the band has adopted a looser approach to the writing and recording process.

Opting out of the mixing process entirely, the band let producer Tom Dalgety steer the songs in the right direction, affording them time to focus on finessing song structures and arrangements.

We would do our work then move on to the next thing and stop at dinnertime. It was very relaxing, because we trusted Tom and we didn’t want to interfere with his process.

“It’s fun to stay up all night long when you first make a record, but after you’ve done that so many times… You don’t really need to stay up till four in the morning every night. It doesn’t really help, it just makes you really fucking tired.”

“The use of Tom as producer was a masterstroke in helping create a Pixies sound that was both true to the band but also contemporary sounding,” adds Peter Thompson.

“The Pixies already have a relatively young audience ready and waiting. Any kid who’s into guitar bands is going be aware of who the Pixies are and want to check out their new material - I played it to my 20-year-old son who loved it - and go to the shows.”

As far as the album’s release is concerned, the Pixies frontman says little has changed since the band started making music in the late ‘80s. He does, however, highlight PIAS’ understanding of the band and their heritage as a huge bonus.

“They let us do what we wanted to do,” he explains. “We’ve never been involved in a contract where we’ve had to compromise anything. I hate to use the word brand but we are already a brand.

“Even at the height of over-priced CDs and the 1990s and all that, with people spending half a million dollars to make a video, we weren’t selling millions of records.

We’ve always occupied a cultish niche so, that being understood, there’s not a lot to discuss. Everyone’s just doing the best they can.”

Peter Thompson adds: “Whilst our expectations for the new album are sky high, we also understand a great deal more about how best to position a Pixies record, and exactly where the Pixies fit in 2016.”

While Head Carrier will be released physically, including a special edition vinyl and CD box set complete with original artwork from the band’s long-time collaborator Vaughan Oliver, Thompson is adamant that the way in which music is released should be entirely up to the artist, and that no format should be ruled out.

“We do our bit by hiring Vaughan Oliver to do our artwork,” he says. “That’s our contribution to making it special for that kind of LP customer.

But I’m personally more interested in streaming as the format where you introduce your art, perhaps a session for YouTube or Spotify. I have an emotional attachment to the LP format just like anybody else, but if it’s going away, it’s going away.”

Head Carrier will be available to all when it is released on September 30, but Thompson is also an advocate of exclusive releases, despite criticism from some quarters of the industry that the format can alienate fans.

“Everything is viable,” he says. “It’s not about what’s ‘fair’. You’re the artist, you make the music, you decide where it is going to be heard. If it doesn’t work and you end up turning off your audience then OK.

An artist is stupid to do something that is going to turn off their audience but, having said that, I’m not particularly concerned. We just try things out. There are no rules. The market will tell you whether or not you’re fucking up.”

With Pixies now in a more settled, dare we say happy place, it looks as though the band is on track tocontinue making music for the foreseeable future.

And, with two albums now under their belt since reuniting and the Deal predicament apparently solved, Thompson – while hesitant to commit to a long-term plan for the band – is clearly instilled with a passion for creating music with Pixies.

“I guess that we are playing it by ear,” he concludes. “Paz and I have talked about getting more into the habit of collaborating together. I’m ready to do another recording session but, having said that, we’re not 20-years-old anymore.

“There are a lot of logistics involved when it comes to getting us all together in the same place at the same time. And in that sense I have had to learn to be patient, but she and I are pretty keen on being a band again. So let’s be a band again!”