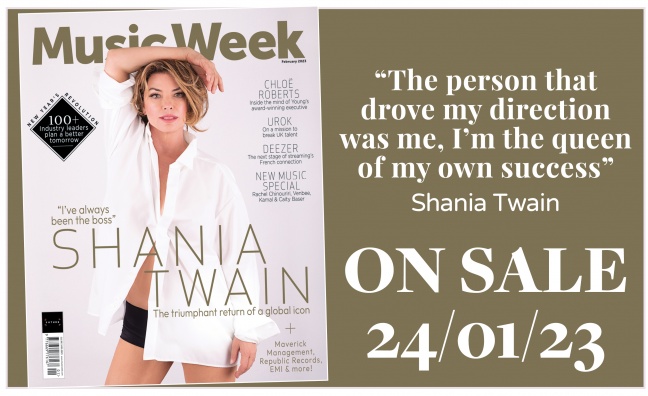 Shania Twain covers the first issue of Music Week of 2023!

The Canadian superstar returns to the cover to tell the life-affirming story of her upcoming sixth album Queen Of Me, while Republic Records, Maverick Management and EMI unravel a campaign that will see the iconic star define 2023.

When Shania Twain released her last album, Now, in 2017, it marked a huge comeback that had been gestating for 15 years. Forged in the aftermath of the divorce from her husband and key creative collaborator Mutt Lange and also losing her voice, it was an emotional triumph. For her next chapter, however, she wants to get back to having fun. In this month’s cover story, the diamond-selling icon is joined by Leila Hebden of Maverick Management, Wendy Goldstein of Republic Records and songwriter Jessica Agombar, to find out how her new record is set to take people by surprise in more ways than one. 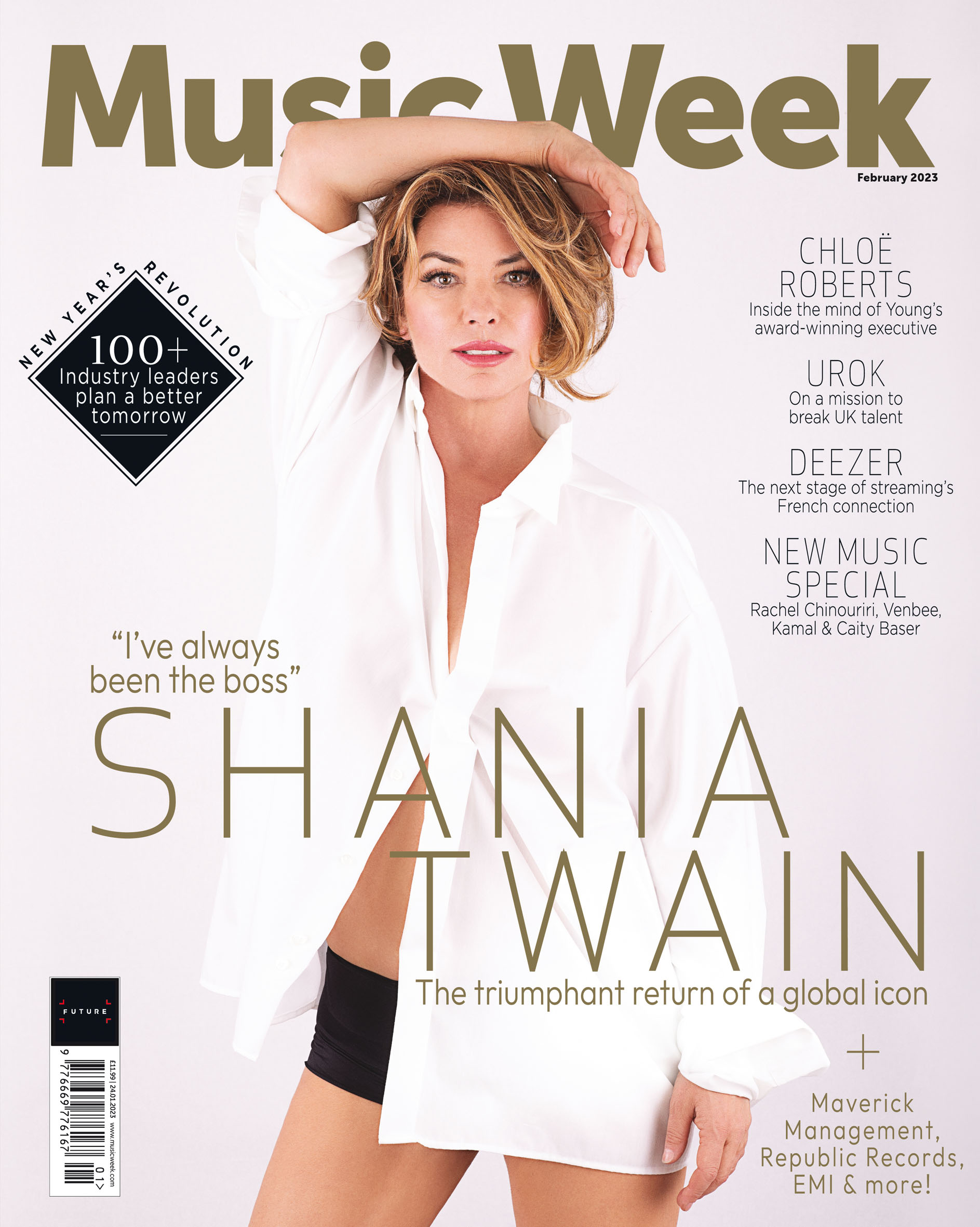 Chloë Roberts stars in the latest edition of The Music Week Interview, in which the Young COO and Music Week Women In Music Awards Businesswoman Of The Year unveils her vision for the company and explains why hits aren’t everything.

This year, our annual new music special comes in the shape of a bumper edition of On The Radar, in which Rachel Chinouriri, Venbee, Kamal and Caity Baser each set out their stall for 2023 and beyond.

Another yearly staple returns as we gather more than 100 leading names from across the business to share their hopes and dreams for 2023.

Also in the features section, we join Roy and Sam Eldridge and Kate Hardwick of UROK to discuss the past, present and future of the management giant.

Finally in this month's features section, we meet Deezer CEO Jeronimo Folgueira as he marks 18 months in charge of the Paris-based streaming service. Having navigated the DSP's IPO last year, Folgueira is now looking ahead with a bold vision for the streaming economy as well as plans for the UK, new artists and industry partners.

This month’s edition of Hitmakers sees Lewis Thompson look back on the making of Becky Hill & David Guetta’s million-selling smash I Remember.

Meanwhile, the new edition of Mentor Me – a collaboration between Music Week and Girls I Rate– sees Vaniece Jno-Baptiste explain her role in European entertainment marketing at Puma and reveals her top career tips.

Radiohead drummer Philip Selway stars in The Aftershow ahead of his third solo album Strange Dance, talking new bands, the record industry and the future of his much-loved band.

In this month's Big Story, we dig deep into 2022's numbers with our exclusive Music Week Analysis based on Official Charts Company data. The lowdown on the year's market results and streaming stars features key insights from Linda Walker, SVP, commercial, UK & Europe at Warner Music UK, Charles Wood, VP of market planning and sales at Sony Music UK and Kim Bayley, CEO of the Entertainment Retailers Association. Also in Frontline, we speak to Polydor's award-winning A&R team about their new recruits and strategy for 2023.

In our Spotlight Q&A, Napper Tandy, CEO and founder of One House, reflects on No.1 success for Eliza Rose and talks about the growth of their expansive music operation, which covers recordings, live, management, video production and more.

Rising Star profiles Lizzie Berchie, audience & engagement coordinator at Parlophone, while Our start-up of the month is fan community platform Levellr, which is helping artists and labels to build a community of followers via Discord. Our featured podcast is Eve Horne’s We Are The Unheard.

In his new Centre Stage column Music Venue Trust CEO Mark Davyd reports from the Music Policy Forum in Washington DC and calls for support in nurturing a new wave of music execs in 2023.

The new issue of Music Week is available from January 24.