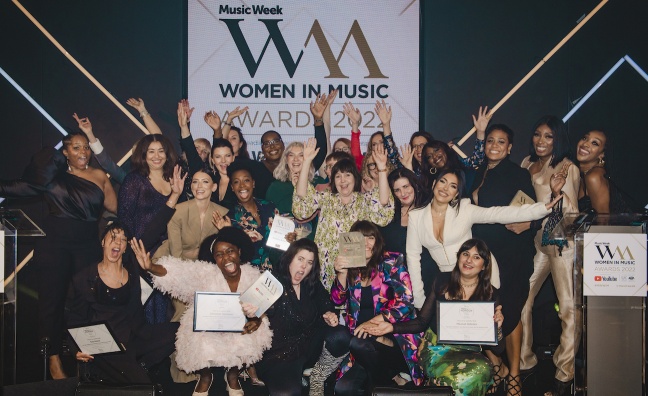 The Music Week Women In Music Awards returned for its bigger ever edition in a new venue for 2022, packed with top executives, artists and music creatives.

Held at the Park Plaza, Westminster Bridge in London (November 11), the daytime ceremony was sold out several weeks in advance.

YouTube is the headline partner for Women In Music, which is staged in association with AIM and UK Music.

The Music Week Women In Music Awards recognise the great careers of women and female-identifying people across the business. This year’s ceremony honoured another industry leaders in artists in 12 categories.

Also recognised at the ceremony, of course, was this year’s Roll Of Honour, in association with TikTok - look out for a series of special Roll Of Honour content around this year’s event. The 14 executives (see below) join a line-up of previous honorees, who have been selected since the awards began in 2014.

The ceremony started with breakthrough stars Nova Twins collecting their New Artist Award, which follows the chart impact and Mercury nomination for their Supernova album. The duo attended the London ceremony ahead of their Manchester Academy 2 gig later in the evening.

Songwriting talent was recognised in the Music Creative category, which was awarded to international hitmaker Jessica Agombar. Alongside David Stewart, Agombar co-wrote Dynamite for BTS, which now ranks among the top 100 most streamed songs of all-time. Agombar has also written for a host of the biggest names in pop including BTS, Shania Twain, Olly Murs, Jennifer Lopez, Jonas Brothers, The Scarlet Opera and Mimi Webb.

Rising Star is always a category to watch closely for top executive talent. This year’s deserving recipient was Charlotte de Burgh-Holder, director of commercial analytics at Sony Music UK. She has recently been appointed chair of the Official Charts Company - an achievement applauded by the WIM audience - following her role in devising new rules to future-proof the charts. The trophy was presented by RCA's Stacey Tang, while the video tribute featured de Burgh-Holder's colleagues and Sony Music UK CEO and chairman Jason Iley.

Acknowledging the support of Iley, Charles Wood and Nicola Tuer at Sony Music, de Burgh-Holder said: "I get to work alongside so many incredible role models every day."

Entrepreneur is also a category to showcase executive talent. This year’s recipient is Hazel Savage, who featured in Music Week a year ago to explain how AI can help music catalogue. Since then, of course, Musiio - the company she co-founded - has been acquired by SoundCloud and Savage has been appointed VP, music intelligence. The award was presented by SoundCloud president Eliah Seton.

TuneCore is another tech-powered company at the forefront of the streaming ecosystem, which helped CEO Andreea Gleeson emerge as our International Woman Of The Year for 2022. The trophy was presented by Denis Ladegaillerie, founder and CEO of parent company Believe.

“I invite you all to continue being part of the change,” said Gleeson. “We all have a role to play in making our field more diverse.”

The Young COO also praised the “amazing event that shines a light on women… An event that inspires execs to interns”.

“This award and this event is testament to the power of representation,” she added, while noting that she was lucky to be surrounded by women execs. And she stressed the importance of industry execs in financial and operational roles.

“We may not always be out front but it’s not always the strikers - brilliant and creative as you all are - who always score the goals,” she said.

Former Music Week cover stars The Black Music Coalition were recognised for their crucial work with the Campaigner award. The BMC includes a female leadership team: Char Grant, Afryea Henry-Fontaine, Sheryl Nwosu and Komali Scott-Jones. Collecting the award from Since ’93’s Glyn Aikins and Columbia A&R Preye Crooks, the BMC co-founders called on the industry to stand by their support for the Blackout Tuesday campaign on racism in 2020.

Komali Scott-Jones said: “This has been achieved on our own time, on passion, on fumes. We want to keep growing and representing Black voices in the industry, and for the whole industry to understand how important it is to be as one.”

Solo artist and Spice Girl Melanie C was a hugely popular winner of the Inspirational Artist category. Describing her as “extremely inspirational to me personally”, the trophy was presented by Self Esteem. And the pair were soon singing along to Spice Up Your Life on the stage, along with the audience.

“The funny thing is I am now inspired by those artists and their work,” said Melanie C of the acknowledgement she’s had from contemporary acts.

The WIM audience gave Melanie C a standing ovation in acknowledgement of her positive impact for women and her hit-making prowess, including co-writing 11 No.1s.

“It’s actually quite overwhelming, I’ve been sitting here being so inspired by everyone,” she said. “But when you see what you’ve done yourself - I’ve done quite a lot!”

“It’s really nice at this time in my career to be honoured in an industry where sometimes your work is not fully credited or credited to other people,” she added.

Recalling the sexism experienced by the Spice Girls, she said: “We wanted to be a girl band for girls, and that fight hasn’t stopped.”

Looking ahead to more collaborations in her solo career, she said: “I’m seeking out and trying to work with as many women as I can, but we are still way off from it being a level playing field. The glass ceiling is barely cracked but together we will break it.”

David Joseph said his loathing of public speaking was well known at the company, but he usually had the guiding hand of Webb.

“If I’m going to step out of my comfort zone for anyone it’s Selina,” he said, noting that they have had each other’s backs for two decades.

“Selina is very much the company’s conscience,” said Joseph. “In our band, she’s the drummer, she sets the tone and rhythm of what we do.”

“Loyal, passionate, thoughtful, all of those strengths are the reason why we are all honouring you and we look forward to many, many more years together,” said Sir Lucian.

“I can’t really put into words the immeasurable contribution she gives to the business and the company,” said Universal Music UK CEO and chairman David Joseph.

“Working on the BRITS with you is a truly special memory of mine,” said Rebecca Allen.

“Thank you so much for all you did for the BRITS 2021, you were a fantastic co-chair and oversaw a show that none of us will ever forget,” said Sir Elton.

Webb described the video tribute as "fantastic - a surreal playback of my life".

"Truthfully, to be standing up here today means so much," she added. “I feel so blessed for the people I get to work with every day. Thank you to David, who’s been my friend and mentor.”

As well as acknowledging the support of her colleagues, she also thanked Sir Lucian for recruiting her from Music Week, where she was formerly editor.

While acknowledging that her experience of the music industry had been positive and that UMG had supported and elevated women into top roles, Webb recognised that hasn’t been the case across the sector.

"There’s still so much more to be done in this industry when it comes to diversity and representation," she said. "Let’s continue to support the next generation of female leaders."

"YolanDa's musicianship is second to none," said broadcaster Huw Stephens.

“You are one of the greatest ambassadors our industry has for the power of music, particularly in education,” said Universal Music’s David Joseph, who was joined on the video tributes by Sony Music’s Jason Iley, Jools Holland, Lorna Clarke and - to the audience's delight - Elmo from Sesame Street. Accepting her award, Brown encouraged the audience in an impromptu singalong of How Deep Is Your Love?

"Hearing you singing then has brought tears to my eyes - in a good way," she said. "It reminds me that music is the thing that brings us together... How many times did people say how important music was in lockdown? The music industry is so important to that. That's why i'm so passionate about how young people engage with music."

Independent Venue Week founder Sybil Bell was honoured with the Live Music Inspiration award, while The Company Award: Diversity In The Workplace went to Come Play With Me.

KISS was the exclusive partner for the Women In Music 2022 After Party, featuring DJ sets from Henrie and Ellie Prohan, who features on this year’s Roll Of Honour.

See below for our list of 2022 category sponsors. Pink Ribbon Foundation was this year’s charity partner - make donations here - and there were event partnerships with Girls I Rate, MOBOLISE and Small Green Shoots.

THE COMPANY AWARD: DIVERSITY IN THE WORKPLACE - Come Play With Me

PeakMusicUK & We Are The Unheard

For future opportunities to showcase your support at Women In Music, contact hazel.eccles@futurenet.com for more information.