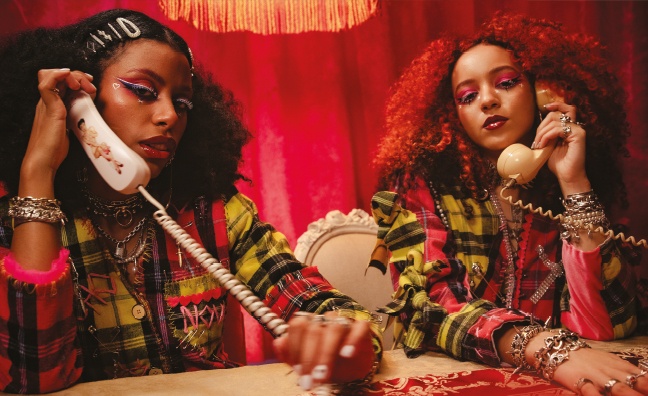 DIY rock duo Nova Twins are dropping their second album Supernova (June 17), a record set to take their sound to new heights. Touted as one of the UK’s most vital rising bands, the pair signed to Marshall Records to release it and, here, Amy Love and Georgia South tell Music Week how they’ve found the perfect partners to spread their inspirational message…

When Music Week meets Nova Twins, the raucous rock duo have swapped pedalboards and mics for needles and thread. Guitarist/vocalist Amy Love and bassist Georgia South are under swathes of glittery gold fabric, frantically sewing outfits for a video shoot the following day.

“We’ve been rehearsing all day and sewing in the evening, that’s why we’re stressed,” says South.

“Sometimes we don’t have a lot of time,” explains Love, “So then we’re up really late and we’ll look crap for the shoot because we’ve been up sewing all night.”

It’s the kind of fiercely entrepreneurial spirit that prompted Love and South to strike a partnership with Marshall Records after making a name for themselves independently. But the pair insist the deal they signed in August last year hasn’t changed their ethos of steering their own ship. Marshall’s expansion into recordings, live and studio work comes with unique perks of its own, and a bespoke deal in favour of artists was the prevailing one for Nova Twins. Recording Supernova – the follow-up to their 2020 debut album Who Are The Girls? – at Marshall’s new studio in Milton Keynes was an added bonus.

“When it comes to opportunities like gigs and stuff, they definitely help us, like, ‘Okay, South By Southwest? Let’s get us there!’” says Love. “They’re definitely what a label should be. They leave the art to the artists and help them do good business.”

Sure enough, the duo will play SXSW this month, before heading home for a UK tour and then back to the US ahead of Supernova’s release on June 17.

Their first release under Marshall was Antagonist, a single that Clara Amfo debuted on BBC Radio 1. Such endorsements are becoming commonplace for the band, who have played support slots with Bring Me The Horizon, Skunk Anansie and more, and have been among the winners at the Heavy Music Awards for two years running.

The recognition signals the arrival of a genre-bending rock act ready to shake up the industry. In November 2020, they penned an open letter calling on the MOBO Awards to add a rock and alternative music category.

“This is more than just a category, it’s a message to all young Black people, letting them know that they can do and be anything that they choose,” they wrote. “It’s time to create a different landscape to the one we entered.”

And so, as they prepare for an action-packed 2022, Nova Twins give us their take on working with Marshall, new music and diversifying the perception of Black music…

What made you partner with Marshall?

Georgia South: “Their relationship with artists is amazing because they give us complete creative control. They back our ideas and have a unique way of doing deals where it’s really in the artists’ favour, which you don’t see on other labels. So that was a massive appeal for us, especially because we’ve been independent for so long. This felt like an easy way to keep our ethos and team up with them on a big partnership as well.”

Amy Love: “We were speaking to them about how a deal should be for artists, and they just made it happen. They were like, ‘Okay, we hear what you’re saying, let’s do a contract that’s a bit unheard of.’ So it was a really interesting deal, definitely one of a kind.”

How has it changed life for Nova Twins?

AL: “I think the beauty of the deal is that it hasn’t. We’ve always been a very hands-on band whether it comes to our music videos, or the way we do things, we’ve created this band so it’s only right that we steer it. So with Marshall, the team just got bigger. Obviously, it’s very helpful in terms of budget for videos and having more to play with than we usually would. But in terms of life, it just feels a bit more organised, there’s more support. But, for us, we’re still the same.”

GS: “You can be involved as much as you want to be with Marshall, obviously we’ll always steer our ship because that’s just the way we are: we love painting every backdrop on our set, being so involved every step of the way. But if you’re a newer artist, they’re definitely there to support you. If you do need more help on your feet, they’re very flexible.”

Supernova is coming out in June, what can we expect?

AL: “We describe it as the most colourful, fun, fantasy nightmare but also, there’s reality in there. It’s a world that we’ve kind of imagined, but it’s also the world we live in. We wrote it during lockdown, so a lot happened in our personal lives. A lot happened to the world. We had the Black Lives Matter movement, so much was happening that it just went into the music. We always talk about what we know or what we feel. As for the sound, it has grown a lot, and Georgia’s pedalboard is huge now – it’s all gone into the album. KMB, which is our next single, is horror, rock, heavy R&B, reminiscent of ’90s pop – it’s everything in one.” 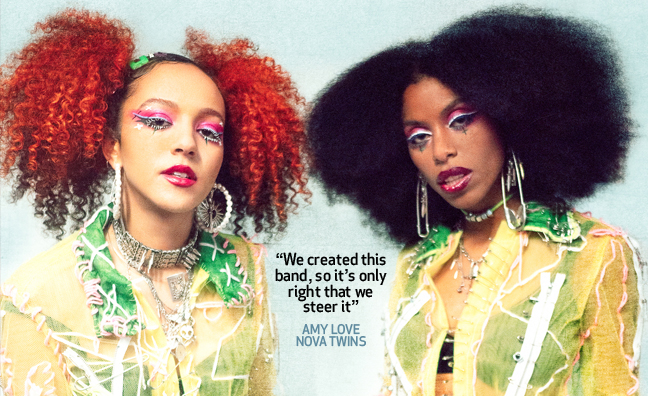 How big a help was it for you to have access to The Marshall Studio?

AL: “Oh, that was amazing. We’re not made of money as a band; you have to really think about how you budget and having access to an amazing studio was super-helpful. We had a really nice team, too: we worked with Jim Abbiss, we had Adam [Beer, Marshall studio manager] helping us all the way, and Blake [Devitt, Neve console specialist] who understands desks and builds them.”

GS: “We were one of the first bands in and the first album to be made there. There was a massive live room, a great control room, and Marshall amps for days that we could try out.”

It sounds like your experience with Marshall has been great so far...

AL: “It’s really important for bands like us [to get] advice if we need it. If we’re talking about PR in Europe, and we’re like, ‘So who can we try?’, they’ll get [a company’s] roster and say, ‘This is who we’re working with. If you don’t like them, you can work with these people.’ It’s just a really good, open, healthy discussion. And it’s how a team should work. I think we were always scared before. You’d hear horror stories of artists signing to a label and suddenly having no control, albums being pushed back, or you’ve been shelved for a bit, but they don’t want to give you back your rights and they don’t want to take you off their books. That’s something that we just didn’t want at all. I’m not saying that happens to every artist because everyone has their own story. But we’ve done it for so long by ourselves with the help of family and friends that we were like, ‘When we do a [deal], it has to stay in that vibe,’ because we’re like old boots, we’re kind of stuck in our own ways. But I think that’s good, if anything, because now we’ve got a healthy team and we can go where the wind takes us.”

Lastly, can your partnership open up opportunities for other artists?

GS: “Yeah, 100%. We get messages from people saying either, ‘I wish I had you growing up,’ or, ‘I’m so glad I found you.’ Every time we get those we just feel so great that we’re making a little difference to people here and there.”

AL: “A lot of the artists we support are already fighting their own fight and doing their own thing. But anything we can do, or they can do, is the main goal. It’s happening, you can see the industry diversifying even more. BLM really spurred that on, and every different sector of the industry had to take a look at itself. Our thing is music so that’s where we’re going to try and help bring awareness and shake it up. We’re saying, ‘Look, you’ve got these options too,’ or, ‘These bands are just as good, if not better, why are they not being recognised?’ We’ve got a way to go but we’re going to keep pushing. So hopefully people won’t have to fight so hard to be themselves and can do what they want.”