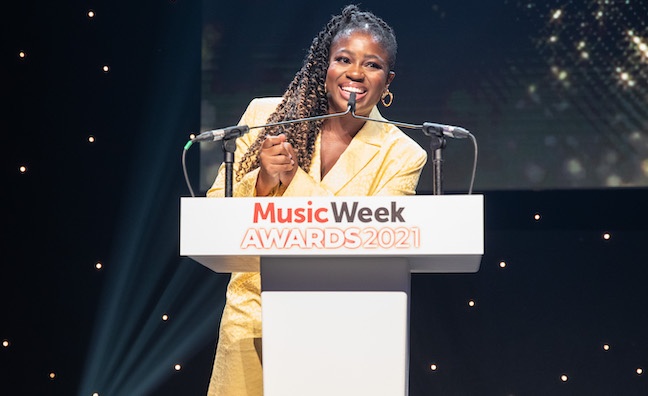 Not only did BBC Radio 1’s Clara Amfo host the Music Week Awards for the first time, she also won an award during the ceremony. She was recognised for the Live Lounge show, which she departed this month in order to take over Future Sounds.

The awards at Battersea Evolution were officially our biggest ever (see here for details of next year’s event).

Here, Clara Amfo reveals her highlights of the evening and her debut outing overseeing the ceremony, including the victory for one familiar face…

How did you enjoy your first time hosting the Music Week Awards?

“There's something quite particular about knowing most of the people in the room and having to give them awards. But at the same time, that's the edifying thing about, isn't it? I have the privilege of enjoying all the hard work in, essentially, three minute and 30-second chunks every day in songs. But behind those songs, those three minutes and 30 seconds, you’ve got an A&R, you’ve got a manager, you've got a plugger, you've got the sales team. And they don’t get the accolades that the artists get, so it’s nice to let people know that they are valued.”

Were there any particular highlights?

“I mean, Damian Christian is a legend, the day that man writes a book… Wow! When I started in the music industry, I started out being essentially an office assistant at Kiss FM, who are the [after party] sponsors. I used to be the assistant to the head of music, so I would look after his diary and do all the plugging meetings. I used to get some of them tea. So all these pluggers, I’ve known them all since I was a teeny, tiny baby. It’s been nice to grow together. It feels really nice to come and see the same faces from when I first came into the industry. And the reception for the lawyers was quite something, that was a highlight, but they were all very good-hearted about it.”

Damian Christian is a legend

How does it feel to retain the Radio Show trophy after winning in 2020?

“This is my second Music Week Award for the show, it’s really special, it was unexpected and delightfully awkward to get whilst I was presenting [the awards]. I do want to big up my producer Leanne Webster, who's the most incredible, brilliant woman and a really good friend, and all my bosses. Being able to still go to work every day, I know I'm lucky but I didn't realise just exactly how lucky I was. Just being able to cycle in and do a radio show while people are stuck at home, you can connect to the listeners in a different way. It's been really special.”

How are you enjoying the new show?

“I’m absolutely loving it. It's a different kind of freedom, a different set of responsibilities, but I'm just having a really great time.”