Music Week Awards 2021: All the winners at the biggest ever edition 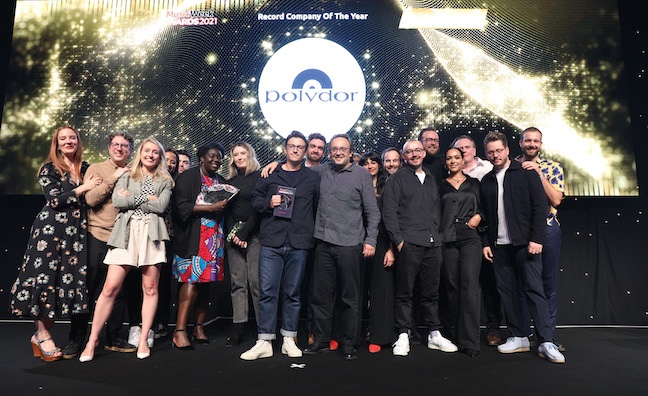 The Music Week Awards returned to Battersea Evolution for the first time since 2019 to celebrate the achievements of the music industry.

After the disruption caused by the Covid pandemic last year (although awards were still presented), the ceremony was back for its biggest ever edition.

This year’s awards reflect achievements during 2020 - a hugely challenging year for the industry. The categories were judged by industry peers.

Polydor Records made it three straight wins in the coveted Record Company category.

"This is the only time of the year that Tom [March] actually lets me say anything," joked Polydor co-president Ben Mortimer in his acceptance speech. "It goes without saying that I've got to thank all of the artists we work with, all of the managers, all of the partners in the room, we know so many of you here who do such a brilliant job. Thank you David and his team for always backing us, supporting us, and thank you Music Week. But the people I really want to thank are the people on this stage and the other 50 or so that we couldn't afford to bring tonight! You were all incredible, my deepest thanks to all of you."

The Universal Music label faced tough competition, but came through following a stellar 2020 including a record-breaking run of No.1 albums.

In the A&R category, Warner Records triumphed in recognition of the label’s huge success with Dua Lipa as well as breakthrough artists Griff and Pa Salieu. Former A&R boss Joe Kentish is now the president of the label, which was headed up by Phil Christie until earlier this year.

"We're a publishing company that invests in people and invests in young - and sometimes old - talent, but always in talent," said McCormack. "It's so good to be back in a room with so many people I love."

The Strat, the special honour for an industry icon, was awarded to MOBO founder and CEO Kanya King in the 25th anniversary year of the MOBO awards. The audience at the ceremony gave King a standing ovation.

"Tonight I am being recognised for my contribution to music, however my work is not over…" King told the audience. "The next chapter is about MOBOLISE, born out of the spirit of MOBO with jobs at its heart and the world of opportunities at its fingertips. We have begun the fight to fill the gaps in representation. Our purpose is to permanently change the racial imbalance in the workplace and business by accelerating and advancing black professionals and entrepreneurs and galvanising trailblazing organisations that are committed to systemic change as well as bringing like-minded people rising together with one goal; to unite, empower and uplift. This is a network of excellence and I hope that allies in this room will join us in the trenches as we prepare to make a difference."

Tap Music were double winners at the ceremony. Ben Mawson and Ed Millett retained their Manager Of The Year title, as well as winning the new category for Live Music Innovation (Event/Series) in recognition of their livestream success with Dua Lipa, Ellie Goulding and Dermot Kennedy. For their second award, Ben Mawson and Ed Millett  brought their mothers out on stage to share the victory.

There were two other new categories on the night, including Talent Agency Of The Year (won by UTA) and Live Music Innovation (Platform), in which LiveNow triumphed following big livestream hits from Dua Lipa and Gorillaz.

Atlantic’s Damian Christian won back the Promotions Team trophy - a category the label has dominated over recent years, but not in 2020. Delighted to be winning again, Christian gave an expletive-laden acceptance speech.

There were some key battles in the independent sector, which saw Partisan maintain their grip on the Independent Record Company category, while Concord Music Publishing took the Independent Publisher trophy - a new category introduced in 2020. PIAS’ distribution and services arm Integral won the Sales Team category.

TikTok retained the Music Consumer Innovation award for TikTok Music. Paul Hourican, head of UK music operations, acknowledged the live sector in the room as he collected the award. Earlier, Banquet's Jon Tolley enthused about TikTok as he collected the Independent Retailer trophy.

In the broadcast categories, BBC Radio 2 took the Station Of The Year title - a big result for head of station Helen Thomas, who was promoted last year. She was joined on stage by presenter Trevor Nelson.

The full list of winners for the 2021 Music Week Awards is below.

Accountancy Firm Of The Year

Grassroots Venue: Spirit Of The Scene

Independent Publisher Of The Year

Law Firm Of The Year

Live Music Innovation Of The Year (Platform) - Special Award For 2021

Manager Of The Year

Promotions Team Of The Year

Publisher Of The Year

Sync Of The Year

Sync Team Of The Year

Talent Agency Of The Year – Special Award For 2021