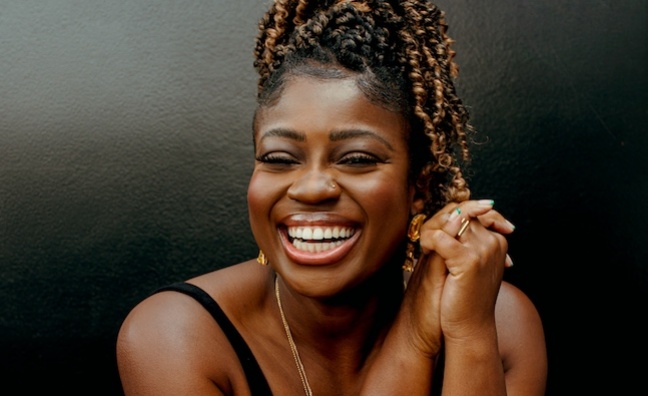 The ceremony at Battersea Evolution on Tuesday (September 14) is officially the biggest ever edition of the Music Week Awards. It also marks the return of the hugely popular awards for the first time since 2019.

Clara Amfo has just taken over the Future Sounds evening show on Radio 1, where she will be championing the latest releases from new and established artists.

Ahead of the launch of the new show, Amfo featured on our exclusive Music Week digital cover, where she discussed her plans for Future Sounds, as well as the Live Lounge, diversity and her recent BBC TV encounter with Billie Eilish.

Here, she opens up about why the Music Week Awards matters, what she’s looking forward to on the night and how new music has helped everyone get through the last 18 months...

How excited are you to be hosting the Music Week Awards?

"I'm really excited because, you know, I’ve received a couple of awards from you fine people myself and it's always lovely. And I've seen so many friends, and people in the industry who I respect so deeply, receive those awards. I've had friends host awards for you. And it's just always such a fun event. It's just nice to see people get their dues because the music industry is one where, well the public anyway, they only receive the end goal of it - their favourite artist singing a song, or the music video - and I think the people behind the scenes, like the producers, the managers, the label bosses, the marketing team, the radio plugger, the TV plugger, all these people don't get consistent public praise like the artists that they work around.

“It’s just nice to see people get the applause that they deserve. One of my best friends, Radha [Medar], she actually manages Mabel, we've known each other from when we were just starting out in the industry, we both had nothing. She won one of the Women In Music Awards one year and I remember just sobbing the whole time, like a proud mum. It's just lovely to attend, so I'm very honoured to host."

It's just lovely to attend, so I'm very honoured to host

What are you excited for on the night?

"It's just about people getting their dues. Our industry, I don't think people realise all the different things that go into it. I say that being a broadcaster, I'm so lucky enough to play music for a living, and have conversations with artists. Even just, for example, the radio pluggers that I’ve been in contact with, they work so hard. You see how they work hard with developing artists; getting them on to radio, sticking by them through moments when they’re popular, and when they're not so popular, all of that. I just think those moments deserve recognition."

It's been a difficult year but what's your message to the music industry now they can finally get back in the same room after 18 months indoors?

"Well I'd say, please have lots of water and Ibuprofen for the day after (laughs). But also, you’ve been missed! I’d just say ‘thank you’, because if there's one thing that I think all of us have been made acutely aware of, if we didn't know before, but the arts - they save us. And music - it's a tonic, it’s a healer, it’s escapism. And I don't know how I would have coped without going to work and playing music every day. I don't know how anybody would have coped without listening to their favourite songs, whether they're working from home or having to go in to do frontline jobs.

“I don't know how anybody on the planet would have coped without some form of musical communication since the start of the pandemic, so I just think it's a ‘welcome back, glad you guys can all get together and here's to looking forward as well’. I’m calling this year the hangover year where we're starting to get back to normality. Obviously, things aren't 100% but I'm actually so excited for next year - for the releases, for the tours, all the gigs, I'm just so excited to see what people are going to pull together, because I think so many people's creativity was tested to the max. Business models were tested to the max during this time, so to see what's going to happen next year is going to be really exciting as well."