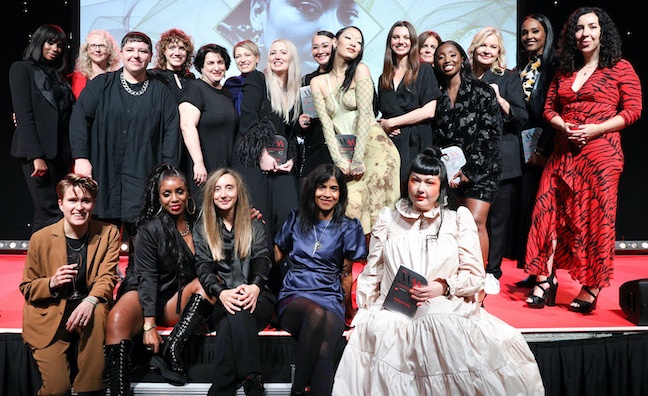 The Music Week Women In Music Awards has returned with an in-person event at the London Hilton on Park Lane. It was the first edition of the ceremony for two years because of the pandemic.

Staged in partnership with UK Music and AIM, the headline sponsor for this year’s event was YouTube Music. Broadcaster Alice Levine returned for the seventh time to host the awards, a hugely popular event in the industry calendar since its launch in 2014.

As well as 14 new inductees (see below) to the Roll Of Honour (read about them all here) sponsored by TikTok (Levine joked that ROH inductees should perform a "small, synchronised routine"), there were 12 inspirational winners across the Women In Music Awards categories.

The category winners started with Kelly Chappel, SVP touring international at Live Nation, who collected the Live Music Inspiration trophy. Video tributes included execs from the live sector, with a rendition of Simply The Best by Natasha Bent.

"I work in live music, so it's absolutely brilliant to see so many people in a room together," said Chappel, who credited the support of the "warrior women" at Live Nation.

Breakthrough star Rina Sawayama picked up the New Artist award, supported by PRS For Music and PRS Foundation. The UK artist, who’s signed to Dirty Hit, has made an impact with her 2020 debut Sawayama released as the pandemic hit.

Japan-born Sawayama forced a change in awards eligibility for the BRITs and Mercury Prize based on residency after she was ruled ineligble for the album award.

"This is my first awards and I'm loving it, especially because I'm eligible," joked Sawayama, who described Dirty Hit's Jamie Oborne as a "top girl boss".

This is my first awards and I'm loving it, especially because I'm eligible

Tony Harlow and Erica Bone, VP people/head of people, collected The Company Award: Diversity in the Workplace supported by Spotify. The major has made a series of initiatives to address equality, diversity and inclusion in the workplace.

Paying tribute to Charway, Cohen described her approach on video meetings: "She leads with her smile and enthusiasm and finishes with her wisdom and intellect."

"I've just had an amazing time in my career," said Charway, who acknowledged the support of colleagues at YouTube.

Star songwriter Carla Marie Williams triumphed in the Campaigner category for her game-changing work with Girls I Rate. You can read more about the work of Girls I Rate in Music Week every month for our regular feature. She was presented with the trophy by RCA artist and former Mercury Prize nominee Nao, along with DJ, presenter and producer Manny Norté.

"I'm officially off Twitter today," joked Carla Marie Williams, who gave an impassioned speech on the issues of equality and diversity in the music industry.

"They ain't people like me," she said of those in power across the business.

But the songwriter and Girls I Rate founder also struck an optimistic note. "I feel like the dial has really moved," she told the audience at the ceremony.

Olivia Hobbs, director/founder of the Blackstar agency, won the award for Entrepreneur, while songwriter Karen Poole was named Music Creative. UMPG's Mike McCormack presented Poole with the trophy in recognition of a career writing hits for acts including Kylie Minogue, The Shapeshifters, Becky Hill and Will Young, whose video message ("Call me!") prompted laughter at the ceremony.

Women In Music’s International Woman of the Year,  Motown CEO and chairwoman Ethiopia Habtemariam, jetted in from LA for the ceremony. UMG CEO & chairman Sir Lucian Grainge was among those paying tribute on video, along with David Jospeh, Rebecca Allen, Motown UK's Rob Pascoe, Lil Baby, Vince Staples and Quavo.

"I am personally thrilled and delighted to see you receive this accolade," said Sir Lucian.

"You've got a natural gift for understanding artists and being a leader," added David Joseph. 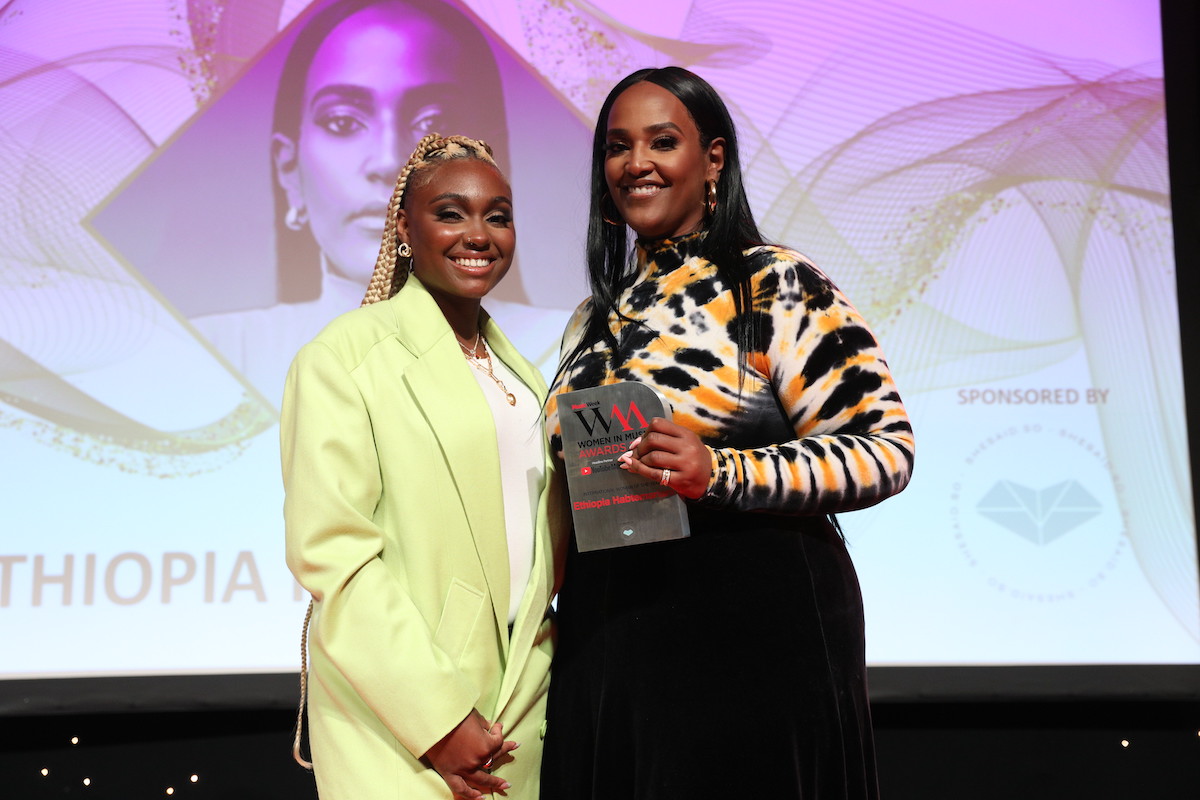 "It's a real privilege and honour to be here," said Habtemarian, who received the award from Tiana Major9.

"Your support means the world to me," Habtemarian told her UMG colleagues. "Becky, let's kill this shit together!"

The Motown boss also described her career development from being an intern. "For every young women in the room, this shit is limitless," she said. "I found my passion and purpose."

Habtemarian also saluted the "amazing Black executives" and "incredible talent" in the UK.

Newly promoted to global head of editorial, Spotify’s Sulinna Ong was honoured as Music Champion at the ceremony. Spotify’s UK MD Tom Connaughton presented her with the award.

"This award wouldn't exist without the talented artists making music," said Ong, who dedicated the award to her Spotify colleagues. "I'm inspired every day by the breadth of talent I listen to in my headphones."

All Saints member and songwriter Shaznay Lewis received the Inspirational Artist award, which was presented by her publisher, Warner Chappell UK MD Shani Gonzales. Video tributes were supplied by each member of All Saints, Shola Ama and execs including Darcus Beese.

In an emotional acceptance speech, Lewis said: "It really fills me with joy to know that people still enjoy what I do."

Sony Music UK CEO & chairman Jason Iley presented Cassandra Gracey, president, 4th Floor Creative, with the Businesswoman Of The Year trophy (supported by Marie Claire). Iley described her as the "life and soul of every party and event".

"She's not afraid to go in and bat for her artists or her team and tell it exactly like it is," said Iley, who also noted her taste in interior decoration for the office.

A phenomenal roll-call of artists saluted Gracey's energy, abilities and support, including Jade Thirlwall, Joy Crookes, Robbie Williams ("Well done babe, about time too"), Pink ("You're badass and you know it"), Hugh Jackman, Tom Grennan and Ellie Goulding, as well as Ferdy Unger-Hamilton ("You make us all look bad"), broadcaster Robert Peston, David Dollimore, Darcus Beese, Since 93's Glyn Aikins and 4th Floor's Dorothy Hui. There was even an appearance by Sony finance chief William Rowe. 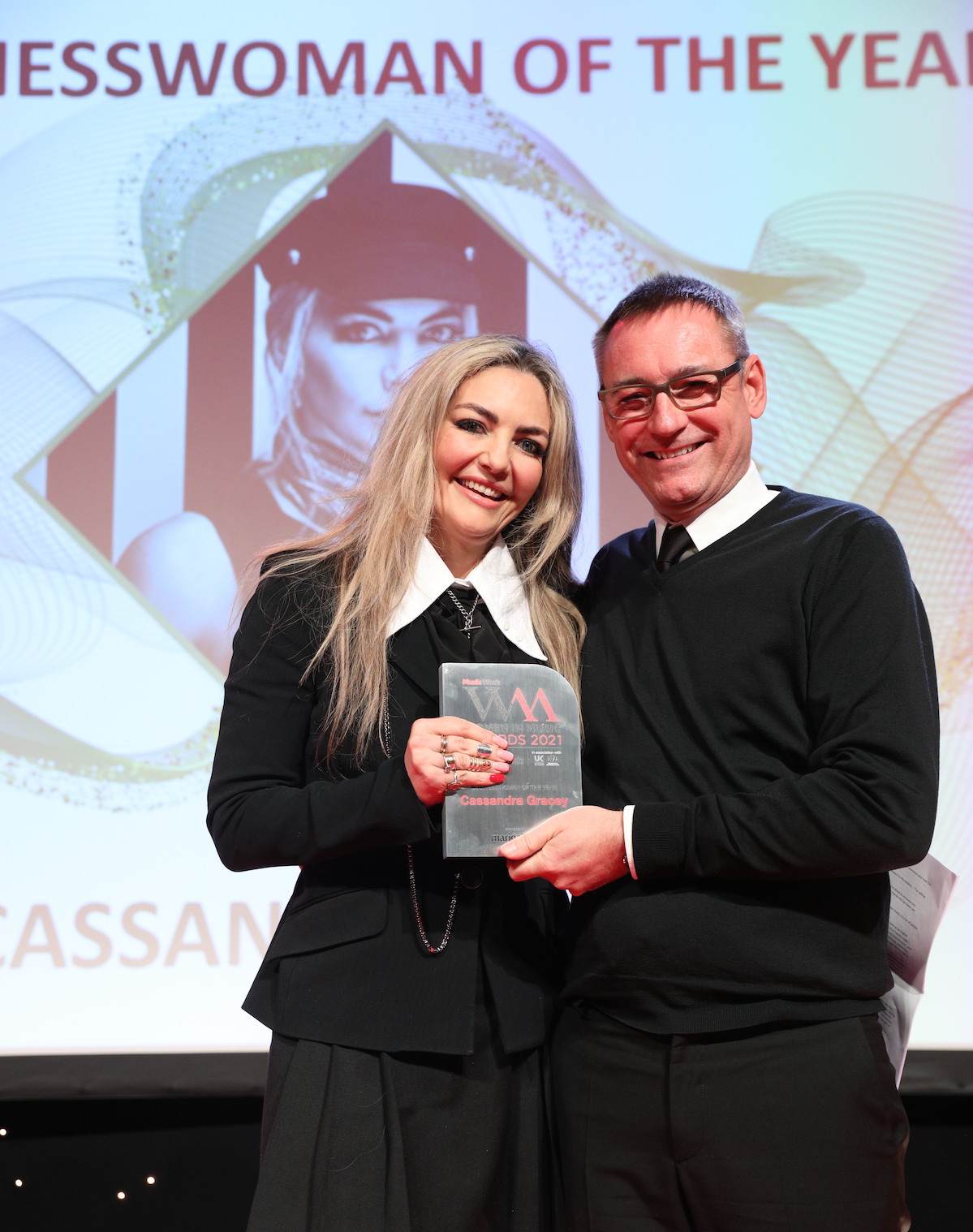 "I can't actually believe that VT, I'm almost speechless - almost," said Gracey. "It feels like that video could be my greatest hits and I'm about to announce my retirement. I'm not, I still have a lot of work to do."

Gracey acknowledged the tribute from Jason Iley. "I also know I frustrate you greatly - and the feeling is mutual," she joked. The 4th Floor boss also thanked Rowe for "truly attempting to teach me the corporate way" and acknowledged the artists-first ethos of Sony Music Group chairman Rob Stringer.

"I do look forward to the day that we no longer need to celebrate women only," said Gracey. "We need to keep the change going."

Gracey called for more support to elevate women into A&R and label president roles, as well as more backing for female artists.

"Any person who doesn't celebrate diversity and equality has no place in our industry," she said.

The Outstanding Contribution award went to Nadia Khan, founder of CTRL Music/Women in CTRL and AIM chair, in recognition of her crucial contribution to advancing equality and inclusion across the industry. It was presented by Ammo Talwar.

"I've been blessed to have had an incredible career," said Khan. "But for the majority of my career, I've been the only woman in the room. I wanted to empower women to speak out on their experiences." 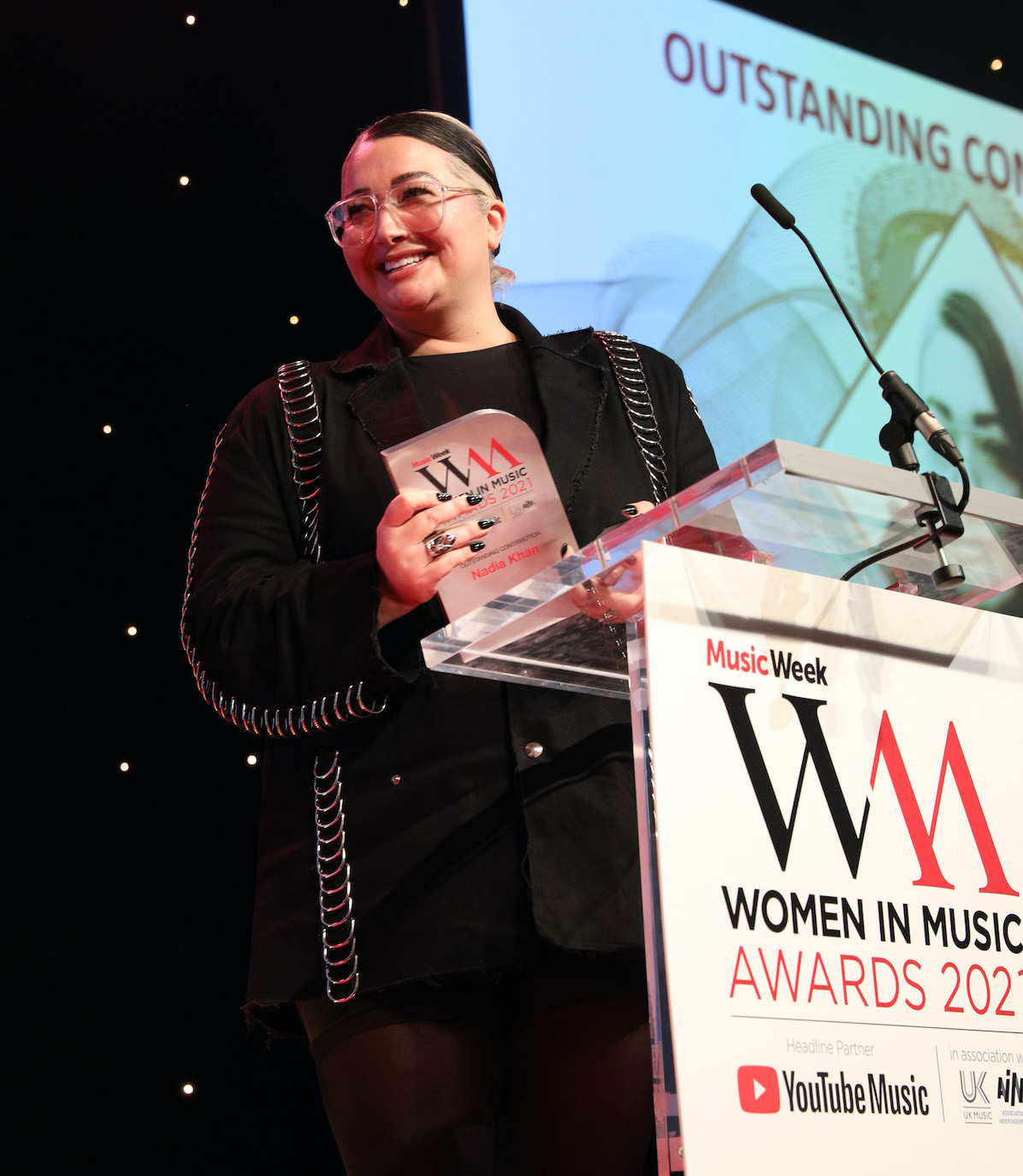 Khan concluded the ceremony with a message for men who are in positions of power in the music business.

"Listen to women, give credit to women and if you have the power, make sure they're being paid fairly," she said. 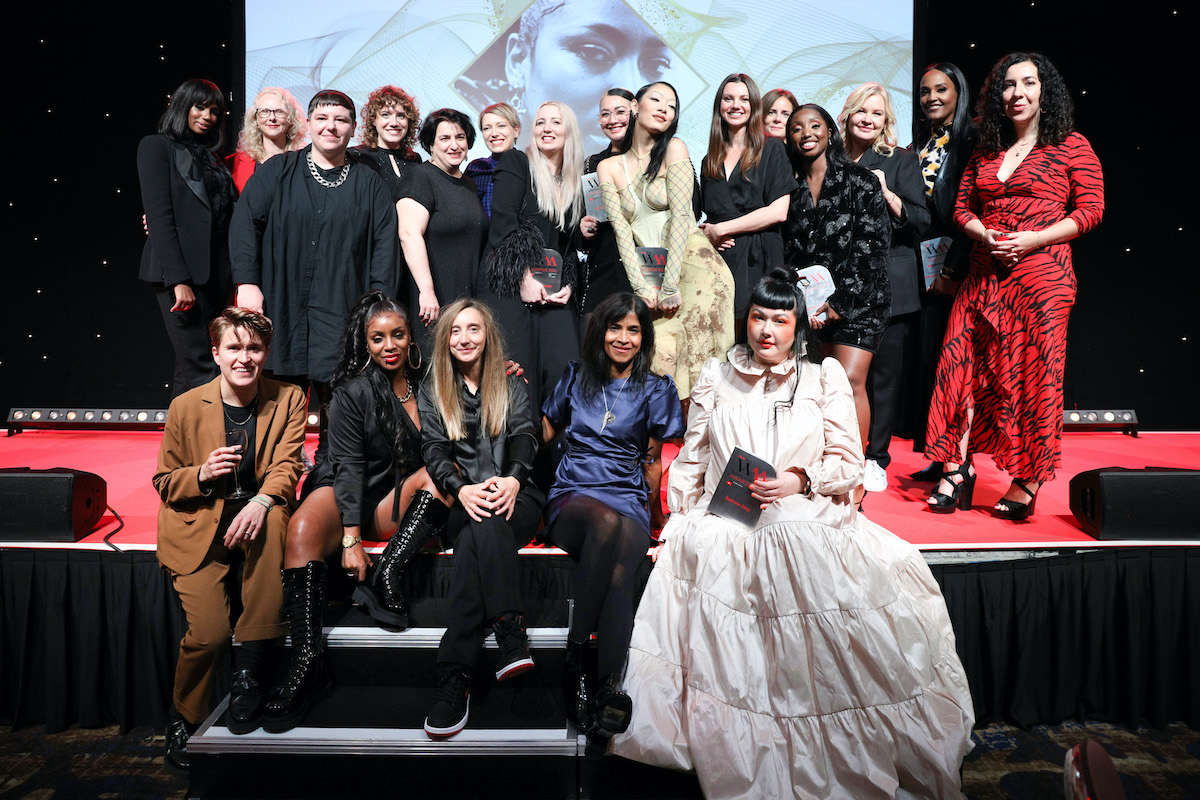 The Company Award: Diversity in the Workplace supported by Spotify - Warner Music UK

Shauni Caballero, founder of The Go 2 Agency/co-founder of G293 Publishing