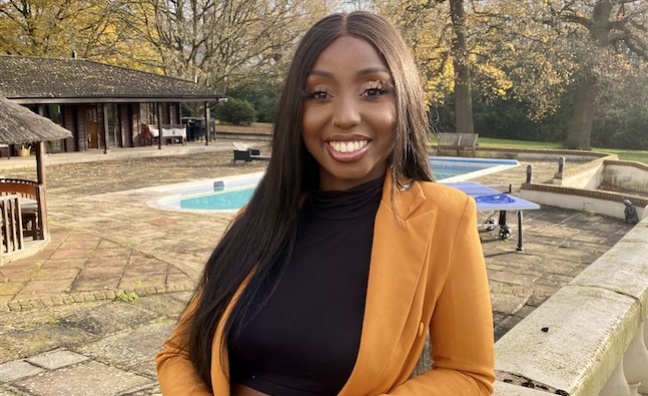 Music Week is teaming up with YouTube Music for the Women In Music Awards in October - Black History Month - with a content series and webinar event, Young, Gifted And Black: Women In Music. Here, Adenike Adenitire meets Sheniece Charway…

Sheniece Charway is clearly in the right profession. After talking to the 29-year-old artist relations manager for YouTube Music for just five minutes, ‘bubbly’, ‘sharp’ and ‘personable’ are a few words that immediately spring to mind. In addition, the passion and dedication with which she speaks about her work and the creativity that drives her is exactly what is needed to excel in a role such as this.

“When I previously worked at a media agency, I always thought about what transferable skills I could take into a role in music,” she says. “At the time it was things like pulling together a deck or being good over email, which still stands. But it’s more than that, it’s about going above and beyond, making sure that you're present and understand what is going on.”

The exciting slew of YouTube Music events that Sheniece Charway has been at the helm of in the past two years alone is proof of that. There have been memorable collaborations with the very best of Black music talent, which has seen her working directly with UK fan favourites such as Ghetts, Skepta and Stefflon Don, as well as international artists including WizKid and Tiwa Savage.

Currently one of the most notable rising stars within the British music industry, Charway got her start through an internship at Columbia Records, which lasted for two-and-a-half years before she was headhunted by YouTube Music in December 2019 for a coordinator role. Unsurprisingly, this was eventually converted into a full-time gig, which she’s been operating in for about a year-and-a-half now.

“I always wanted to work in music,” she says. “But I didn't know in what role. I knew I couldn't sing, rap or dance. But I knew I really had a big passion for artists and helping them reach their fanbase, so getting to the role I’m in now was definitely organic.”

This dedication has no doubt enhanced her position as an ambassador for the Power Up initiative, which supports black music creators and professionals within the industry.

Here, Sheniece Charway opens up about her role at YouTube Music, mentors, diversity, and plans for Black History Month...

What are some of the standout projects you have worked on while you have been at YouTube?

“I think one of the ones people always bring up to me is the YouTube Originals: A Day in the Live with WizKid, which happened last November. We really wanted to work with Wizkid, and his manager Jada [Pollock] and I had been talking about doing something with YouTube for a while, so that was the perfect opportunity. People hadn't seen him in that light before, so it was exciting for fans to be able to see him with his family and the producers he works with, and also to see the album we’ve all been waiting for.

“We also had the Excellence Brunch last February, which was a celebration of Black British culture and music, which was just a really nice way for us all to come together as a community. Another one was YouTube Music Presents The Legacy Series: Fashion x Music. This is where we started the Legacy Series, which is all about Black British culture, and celebrating that without always having to say the word ‘Black’, which is great. We partnered with Westfield, we had a pop-up store and a livestream, for which we partnered with GUAP, which was just awesome. It’s really great to pair Black British artists and Black UK fashion designers as well.”

What have you got planned for Black History Month this year?

“Actually, as part of Music Week’s Women In Music we're doing a panel called Young, Black And Gifted, which myself and Colleen Harris will be hosting. That will go live on October 28. For this we're going to be spotlighting some amazing Black women in the industry, letting them tell their stories, to help to inspire people. We also have other things in the pipeline, but they are not yet confirmed. We do things throughout the year, as we believe it's important for it to be a continuous narrative.”

There are a lot of young Black women currently making a lot of moves and waves in the music industry. How important do you think that is for the industry?

“I think it's so important for other people, especially young Black women who are trying to come through, to see people that look like them. And it also helps with change and having other people in the room, so it's not the same people all the time. And I think even in this climate when popular culture is Black music, that representation needs to be there. But I think it needs to be a little bit more of a thing as it's still not where it needs to be yet. Hopefully, in the next couple of years we'll see more people in positions like me, at labels, or as president of a label. I think that’s important for the culture and the music industry as a whole.”

And are there any mentors that you have in the industry? And how have they been instrumental in your career?

“I've been very lucky to have been around so many amazing people, men and women, who have been able to guide me through my career, people like Stacey Tang, executive vice president of RCA UK. She's been so awesome and really helped me. And then there's my whole team at YouTube. I have such an amazing team, and they've been able to really guide me. And then there's the likes of Grace Ladoja [co-founder of Metallic Inc and manager of Skepta], who has always been a big champion for me, and Vannessa Amadi-Ogbonna who manages Davido. There are loads of women in this industry who have always been so supportive. I could list so many but those are just a couple off the top of my head.”

What are you most optimistic about in terms of the industry in the next five to 10 years? What are you excited about?

“I'm really excited to see more Black people in positions that can make change and bring the next generation through. I think we're slowly seeing it happening. And it's kind of great to see the likes of 0207 Def Jam, Dream Life, Since ‘93 and all these Black labels coming through. And then you're also seeing Black people in positions that are making change, for example, Colin Batsa at Virgin is bringing a lot of exciting new artists through. I'm also hoping that at some point, there'll be more internships for the next generation to come through to help with that representation.”

You are currently an ambassador for the PRS’s Power Up initiative which is sponsored by YouTube. What does that entail?

“It’s basically making sure that everything that Power Up needs in terms of extra support internally, I am making sure I have these conversations. We also have masterclasses and workshops - we had one the other day where we were actually able to sit down with the cohort and run them through YouTube products and the best way they can use them. This is key especially because a lot of them are artists, so we want to make sure they're making the most out of their YouTube channel and understand how to monetise it. So being ambassadors is just making sure that we're championing them and making sure they're getting what they need.”