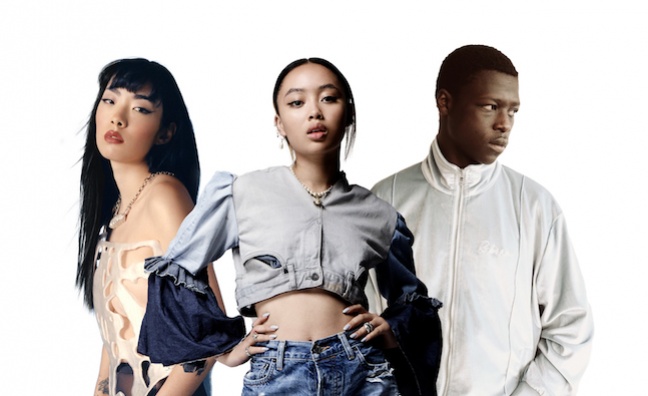 Griff, Pa Salieu and Rina Sawayama are the nominees for the BRITs Rising Star award 2021.

The BRITs Rising Star supported by BBC Radio 1 returns for 2021 shortly after last year’s winner, Celeste, topped the charts with her debut album Not Your Muse.

The BRITs Rising Star shortlist is selected by a panel of music editors and critics from the national and online press,, heads of music at major radio and music TV stations plus songwriters, producers and live bookers.

The award is open to British artists who, as of February 28, 2021, have not yet achieved an Official Album Charts Top 20 placing or achieved more than one Top 20 chart placing in the Official Singles Chart.

The winner will be announced on Friday, March 19. Details of this year’s BRITs ceremony – which is helmed by Universal Music’s Rebecca Allen and Selina Webb – are yet to be revealed.

I literally fell to the floor when I found out

Griff (above, centre), Pa Salieu (right) and Rina Sawayama (left) have all appeared in Music Week’s On The Radar column. Griff and Pa Salieu are signed to Warner Records, while Rina Sawayama is with Dirty Hit.

Griff soundtracked Disney’s Christmas ad last year and has 3,578,226 monthly listeners on Spotify. Love Is A Compass peaked at No.42 and with 107,075 sales to date (OCC), is the singer’s biggest track.

Pa Salieu has 900,122 monthly listeners on Spotify and released his Send Them To Coventry mixtape last year. His biggest seller is breakthrough single Frontline, which has 57,707 sales to date. Having won the BBC Sound Of 2021 poll, the Coventry rapper could follow Celeste in doing the BBC and BRITs double.

Rina Sawayama released her debut album Sawayama last year, it has 13,951 sales to date, while the singer has 2,339,178 monthly listeners on Spotify.

In February, the BPI changed the rules for entry to the BRITs and Mercury Prize after conversations with Sawayama, who was born in Japan and moved to the UK as a young child. Japan does not allow dual-citizenship, which meant Sawayama was ineligible for the Mercury Prize last year.

Rina Sawayama said: “I literally fell to the floor when I found out that I’d been nominated for Rising Star. I really can’t put into words how much this means to me given that I wasn’t eligible for this award a few weeks ago and now that door has been opened for future generations of artists like myself. Thank you so much to everyone who voted for me, it means the world.”

Love and blessings every time!

Griff said: “It’s kinda terrifying how many legends have been nominated for this award. I never, ever, ever expected making beats in my music room after school could eventually lead to a BRIT nomination. Super-lame, but I remember after school, catching up on the BRITs and crying watching Stormzy perform. And I don’t think I really knew what that emotion was at the time but I think it was just an overwhelming sense of aspiration. So to be nominated for a BRIT award three years on is completely surreal!”

Pa Salieu said: “I am very grateful to be shortlisted for this BRIT award. Love and blessings every time! Thanks to everyone supporting my journey so far.”