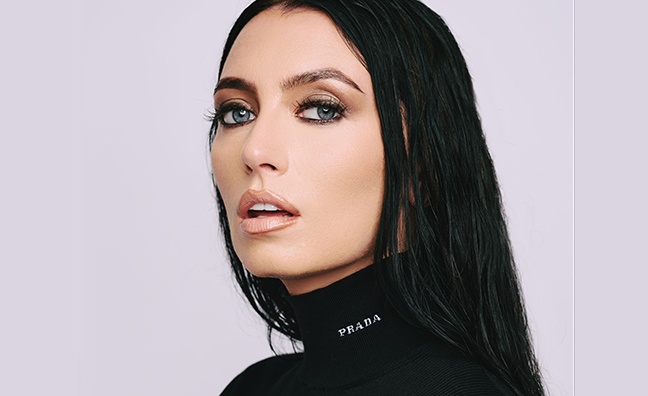 At the Women In Music Awards 2022, we celebrated the achievements of 12 game-changing executives and artists as the industry came together to honour their work. Music Week has spoken to all 12 winners to tell their stories.

Jessica Agombar’s first foray into songwriting came about in 2008 when she was signed to British hit factory Xenomania.

Whilst there, she landed a role in St Trinian’s 2: The Legend of Fritton's Gold, which gave her the opportunity to be a part of the writing and recording of the accompanying soundtrack.

Agombar then signed to Atlantic Records, joining British girl group Parade and scoring a Top 10 hit with debut single Louder. She later started an independent and self-funded solo project, enjoying support from Kiss FM, Capital Xtra and BBC Radio 1Xtra. It was around this time that she realised the part of being an artist she enjoyed most was creating the music, and committed to songwriting.

Before long, Agombar began collaborating with David Stewart, quickly forming a creative relationship to be reckoned with. The pair co-wrote Dynamite for BTS, which now ranks among the top 100 most streamed songs of all-time. Agombar has written for a host of the biggest names in pop including BTS, Shania Twain, Olly Murs, Jennifer Lopez, Jonas Brothers, The Scarlet Opera and Mimi Webb. To date, songs written by Agombar have collectively amassed somewhere in the region of 7.5 billion streams.

Her ambition for a chorus, determination to succeed and pure love of music make Jessica Agombar one of the most sought after writers in the industry.

Congratulations on winning this year’s Music Creative Award, what does that mean to you? What is creativity to you?

“I can't quite get my head wrapped around it because of all of the incredible women that have been involved over the years. And so far, it just really humbles me for my name to even be amongst them. I was also really, really, really shocked because, as a songwriter, you don't really look for recognition. You do it for your creative ego and the artist is the vessel.”

What was the industry like for you when you started out? Were there any glass ceilings you had to break through? Any obstacles to overcome on your road to amassing over five billion combined streams from your writing?

“I wouldn’t say it was a glass ceiling, I couldn’t open the door at all. When I started out it felt like there were no female managers, no women in A&R. I used to be in a girl band called Parade and we were signed to Atlantic. Everyone thought I was really happy, but we were constantly being told about our weight, how we looked, and were asked to see dieticians… And we were told we were disposable. Our creativity was valued so little. And it wasn’t necessarily the record label. It could be a photographer on a shoot, or a TV producer.

“Also, I grew up in Bow, East London. I didn’t have the kind of family with connections or who knew how to open doors for me. But at the same time, a lot of boys in my area were getting really big with grime. Dizzee Rascal, Tinchy Strider, Wiley and Roll Deep… but it was a boys’ club. Being in this manufactured girl band and being from an area where all of the boys are just winning, winning, winning and then never seeing women elsewhere in the industry… It took me years to even navigate how to get into a meeting room without being there with a man in order to talk on my behalf. And I feel like maybe it’s to the detriment of me or maybe this is a positive, but now it makes me speak a little bit louder, or get my voice heard a little bit more.”

I wouldn’t say it was a glass ceiling, I couldn’t open the door at all

How did you move from being an artist to being a songwriter? What is the benefit of knowing what it’s like to walk in an artist’s shoes when it comes to working and writing for them?

“I knew I wanted to write big global hits for the world’s biggest pop stars and I learned not to be shy about saying that. I wasn’t at the forefront, so I was able to stop being shy about my dreams. I had been trying to fund myself as an independent artist, arranging studio time and shoots and doing my own plugging. I was working two jobs too and it was knackering. But then someone suggested songwriting and it really appealed. I realised I loved part of what I did, but I didn’t want to get up and perform.

“I think I can sense an artist’s mood when they come into the studio, how they’re feeling about themselves and the project and the people around them. They may be on a conveyor belt, meeting new people everyday and having to give their life story and then sit down and create something. I want them to feel comfortable and that they can trust me.”

When it comes to the industry’s relations with songwriters, what do they need more support with in your mind? What can the industry do to help its own creatives?

“I think what a lot of people don’t realise is that we do everything on spec. We don’t know if anything in the studio will see the light of day, but we’ve paid to get there, paid for lunch. It always absolutely baffles me that the producer is so well respected and the production deal is cut before anyone walks into the room. And eight times out of ten, that producer is a man. And every single time he’s getting paid whether the song comes out or not. At the higher levels, they can insist that the song comes out. It always astonishes me that it isn’t the same for writers.”

What are your proudest moments as a creative so far? You’ve worked with so many different people.

“It was BTS’ Dynamite going to No.1 worldwide. It was culturally huge because it was their first song in English. And they’re the biggest band in the world right now, the numbers are insane. It was amazing that Big Hit, their label who are not British and not American, gave me and my writing partner David Stewart their absolute trust to do it ourselves, which is a rarity these days where so many songs have 12 or 13 writers on them. It gave me the confidence and the happiness to continue as I started.”

What has working with BTS done for your career?

“It’s opened a lot of doors in the US, which for Brits is really hard. My experience of being in Los Angeles when I was in a band was so horrific that it really put me off going there for nine years. I was scared and I knew I wouldn’t go back until I’d done something so big in my career that I couldn’t be made to feel uncomfortable or be undermined again. Also it’s changed my life financially, obviously.”

In 2021, you told Music Week that the top tip you’d give to aspiring creatives is that “you will get a lot of ‘nos before getting a yes”. What is the key, in your mind, to coping with rejection and disappointment in the industry? How do you not let that knock your creative confidence, so to speak?

“I still get ‘nos’. I'm still getting ‘nos’ every single day. But I got a ‘yes’ that turned into a huge ‘Yes,’ and created a domino effect of others. My thing is, throw 10 things at a wall and one has to stick. And if that one doesn't, then the next batch will. You can suffer through the nos if you remember why you’re there. And if you are there because of your love for music, then the next day when you get into a session and you write a song, you get that incredible bubbling, energetic, amazing feeling of writing a beautiful chorus. That’s when you’ll remind yourself of why you do it.”