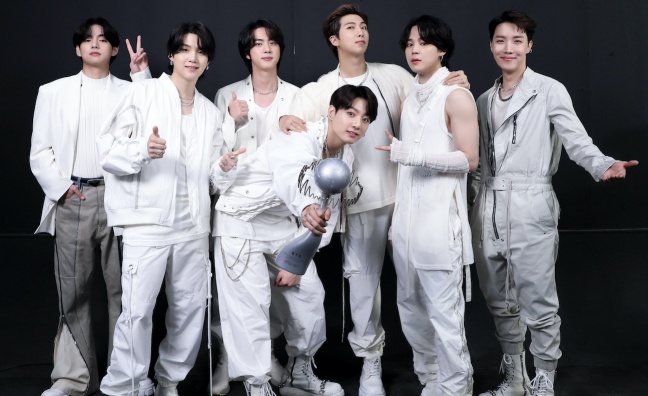 BTS have been revealed as the winners of 2021’s IFPI Global Recording Artist of the Year Award.

IFPI, which represents the music industry worldwide, described the victory as a “landmark moment for the recording industry” as the South Korean group became the first act to win the award for two consecutive years.

The unique award is calculated according to an artist’s or group’s worldwide performance across digital and physical music formats during the year, from streams to vinyl, and covers their entire body of work.

The award was announced at the culmination of the IFPI Global Artist Chart countdown, which revealed the Top 10 best-selling artists of the year globally.

By topping the IFPI Global Artist Chart for the second year in a row, BTS continue to make global chart history. The group finished ahead of Taylor Swift, Adele, Drake and Ed Sheeran.

Having become familiar faces in the IFPI Global Artist Chart since 2018, when they entered at No.2, the 2020 chart saw them become the first Korean act to win the accolade, as well as the first winner to perform primarily in a language other than English.

In the latest chart, BTS were joined by fellow K-pop superstars Seventeen who made their first chart appearance at No.9, demonstrating the growing popularity of K-Pop with music fans across the globe.

2021 saw BTS continue their world dominance. Butter, which was released in May 2021, was No.1 in the US for seven consecutive weeks. In July, BTS’ single Permission To Dance also debuted at No.1 on the Hot 100, replacing themselves at the top spot.

In September, Coldplay and BTS released My Universe, which also charted at No.1 in the US.

In Asia, BTS released their Japanese language greatest hits album BTS, The Best which topped the Oricon Year End Album Chart – the first time a non-domestic act has done so in 37 years. The CD release of Butter topped the Gaon year-end charts in South Korea, the sixth year in succession that BTS have managed this feat, with six separate releases. 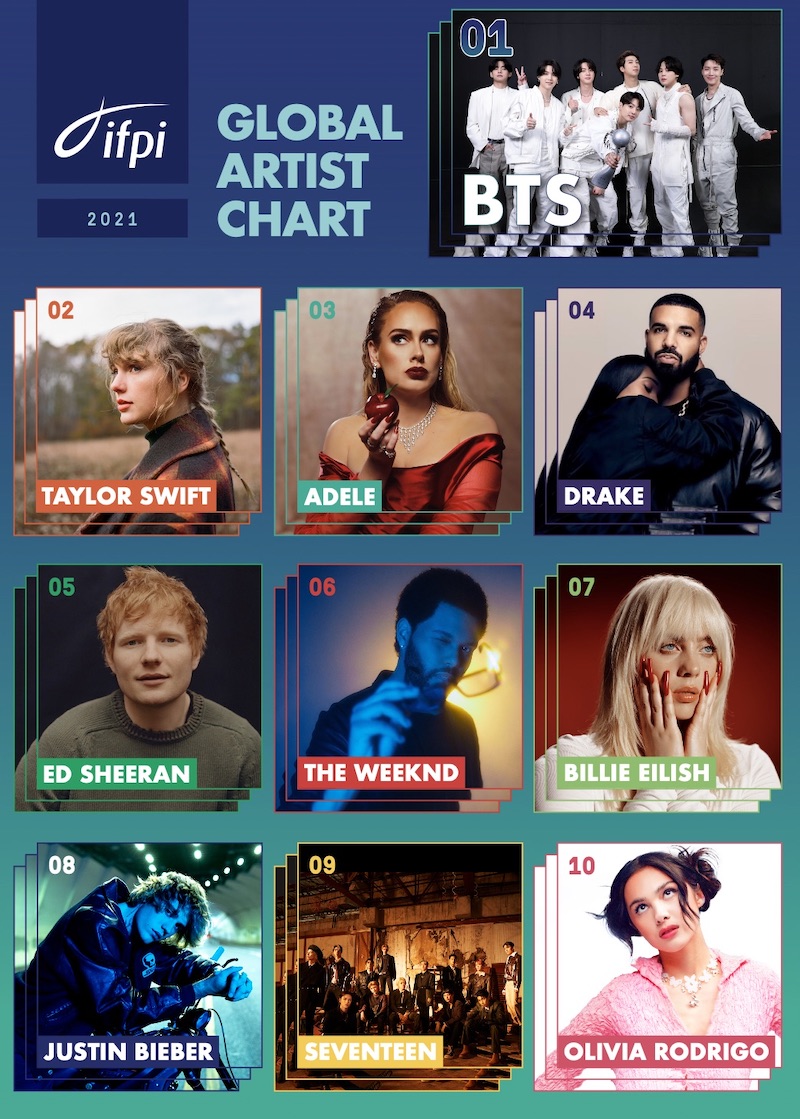 Frances Moore, chief executive, IFPI, said: “BTS’ phenomenal success over the last year is a testament to their creativity, hard work and ongoing commitment to continuing to find ways to bring their music to the world. By performing in three different languages, they demonstrate their extraordinarily unique global appeal and their dynamic and passionate fanbase has helped to make them the first artists in history to top the Global Artist Chart in two consecutive years.

“We would like to wish RM, Jin, Suga, J-hope, Jimin, V and Jung Kook and all who work on their team huge congratulations on winning the Global Recording Artist of the Year Award and on another year of brilliant success.”

BTS were joined in the top three of the IFPI Global Artist Chart by two-time winner Taylor Swift, who finished at No.2 for the second consecutive year after previously topping the 2019 chart.

Swift was the highest charting solo artist followed by Adele, who secured third place, re-entering the chart for the first time since winning it in 2015.

Former Global Artist Chart winners Drake and Ed Sheeran followed at No.4 and No.5 respectively.

Breakthrough star and Music Week’s Artist Of The Year Olivia Rodrigo made her first impression on the chart for 2021, entering at No.10, following international success with her debut album Sour.