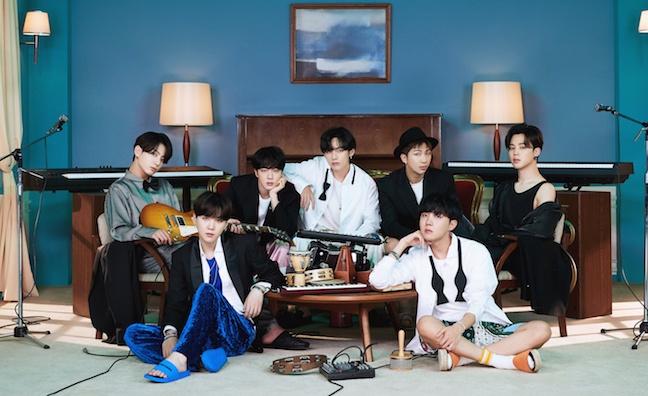 BTS have been revealed as the winners of 2020’s IFPI Global Recording Artist of the Year Award.

The unique award is calculated according to worldwide performance across digital and physical music formats during the year, from streams to vinyl, and covers their entire body of work.

BTS’ win marks their first ever IFPI award, after finishing second in 2018’s IFPI Global Artist Chart and at No.7 in 2019. They become the first Korean act to win the accolade, as well as the first winner to perform primarily in a language other than English.

The award from the international trade body for the recording industry comes after an historic year for BTS, who broke record after record with their multiple album releases.

Map Of The Soul: 7 was released in February 2020 as one of the most pre-ordered albums of all time, and went to No.1 in more than 20 countries. The Japanese-language edition was released in July 2020, passing 500,000 copies within two days of release and becoming the best-selling album by a male foreign artist ever in that market.

The single Dynamite marked the first time BTS had recorded a track fully in English, which became their first ever US No.1 single and broke records for opening day streams on YouTube and Spotify.

BTS closed the year with the release of BE (Deluxe Edition) in November, a response to the Covid-19 pandemic summed up by the lead single Life Goes On, which secured No.1s across three continents.

Frances Moore, chief executive, IFPI, said: “BTS are a global phenomenon. They have had another outstanding year, releasing three albums, and continually finding creative and engaging ways to share their story with the world. They truly show the power that music has to bring joy and happiness to people the world over.

“We would like to congratulate RM, Jin, SUGA, j-hope, Jimin, V and Jung Kook and we are excited to see what they have in store next.”

BTS were joined in the top three of the IFPI Global Artist Chart by two-time winners Taylor Swift and Drake, who secured a place in the top three for the fourth time in the last five years.

Elsewhere in the chart, there were returns to the Top 10 for The Weeknd (No.4) and Justin Bieber (No.10) following the success of their latest album projects. The Weeknd returns to the top ten after one year out, while Bieber charts for the first time since 2016.

Billie Eilish celebrates a second consecutive year in the Top 5, while Juice Wrld’s posthumously-released album Legends Never Die helped him to No.9.