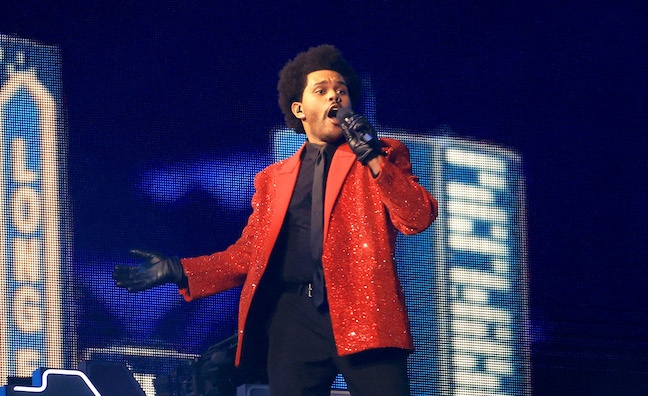 Following his spectacular performance at the Super Bowl last weekend, The Weeknd is now aiming to make a big chart impact with The Highlights album (Island/Republic/XO).

The collection of hits and favourite tracks is chasing a No.2 finish behind the new Foo Fighters LP, though The Weeknd could well end up with the most streams for any album this week.

The Super Bowl half-time performance has boosted The Weeknd’s streaming figures, with Spotify reporting a 72% increase on game night in the UK.

Almost a year after its release, Save Your Tears is now set to become a Top 20 hit after soaring up the charts this week (Official Charts Company sales are up 69% week-on-week). Save Your Tears has 130,851 sales to date.

Of course, Blinding Lights has already been a huge No.1 for The Weeknd and was the biggest single of 2020. It has UK sales to date of 2,429,924, according to the Official Charts Company.

Here, Island president Louis Bloom gives his verdict on the Super Bowl set, opens up about the latest album campaign and looks ahead to The Weeknd’s huge touring plans…

What was your impression of the Super Bowl performance by The Weeknd?

“You never know what Abel will come up with next; what you do know is that it will be hugely ambitious, visually stunning and live long in the memory. And, of course, he delivered on the biggest stage of all. This Super Bowl performance was truly spectacular and completely original. It was all the more impressive considering the absence of the huge live audience and the energy that creates. Abel managed to make the performance feel intimate and cinematic at the same time.

“I can’t think of another artist to touch him as a performer right now. Blinding Lights was the undoubted song of the year in 2020. With The Highlights album out now – a reminder of the many classic songs that The Weeknd has released over the last decade – Abel has established himself as one of the most interesting and challenging artists in entertainment and a true world superstar.”

What are the ambitions for The Highlights album?

“Abel continues to dominate the airwaves, the charts and our screens and has consistently broken records across all areas of the industry, all the while being one of the coolest, most creative and challenging artists in entertainment. When The Highlights was released on Friday [February 5], it instantly became a massive streaming success and helped make The Weeknd, currently, the most streamed artist in the world. This is a seminal moment in the artist’s career and The Highlights is all about celebrating and amplifying that.”

The Weeknd had the biggest single of 2020 – what was key to its streaming success?

“Blinding Lights is one of those truly year-defining songs. It was the biggest single of 2020 in every way. Not only was it a massive streaming success, with over 5.5 billion streams to date, but it was also the biggest-selling single of 2020, the biggest airplay song of the year and also took the crown for most weeks at No.1 in the UK last year. The song was everywhere and that wasn’t by chance. The team at XO came to us with such a clear vision for the entire project, and a clear vision for what this album was all about. People became engaged with ‘the man in the red jacket’ and genuinely wanted to see where his journey was going to take him next. It was great to team up with XO and Republic once again to help spread that vision.”

The Weeknd’s lined up his first world tour – how will live help maintain The Highlights campaign into 2022?

“These dates have been rescheduled from October 2020 and we’ve no doubt the appetite for this tour will be even more feverish than before. Abel is a perfectionist and puts so much creativity into his live shows, as we have just seen at the Super Bowl, and this forthcoming tour promises to be equally spectacular. We can’t wait to have him back in the UK.”