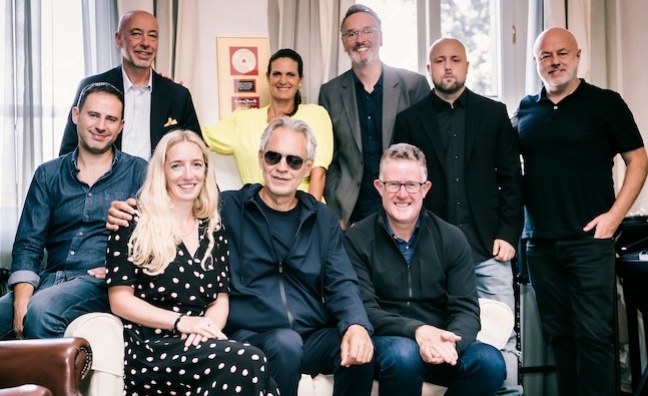 The strategic worldwide partnership sees Bocelli signing directly to UMG for the first time after more than 25 years of collaboration. It marks the beginning of an expansive, long-term multi-album deal.

Andrea Bocelli has sold over 90 million albums to date and generated more than five billion streams. This new multi-dimensional agreement will include a series of recorded music and audiovisual projects, alongside branding services, synchronisation and music-related merchandising.

The major described it as a new era of collaboration with UMG and its frontline labels worldwide, including extending his enduring partnership with the team at Decca Records Group.

Bocelli’s new recording agreement significantly expands his historic relationship with Decca and UMG, which previously distributed his albums for over a quarter of a century in a partnership with Italian indie Sugar.

“Working closely with Andrea Bocelli and his management team at Almud and Maverick, UMG will leverage its unique combination of global reach, creative and commercial expertise, and renowned marketing and promotional support to ensure that both Bocelli’s future releases and his transcendent catalogue continues to reach and introduce his music to new generations of fans around the world, creating new opportunities to further solidify his legacy as the world’s most beloved tenor,” said a statement from UMG.

In making the announcement, Andrea Bocelli said: “It is an exciting novelty, but also the confirmation of our solid and well-established collaborative relationship over the years. Fully joining the artist stable of the largest record company in the world is the culmination of a dream, but it is also a bit like returning home, because in UMG I have always found that family dimension that is ideal, even in the artistic field, to give the best of oneself... This agreement represents a great honour for me, for Veronica [Berti Bocelli, Bocelli’s wife and manager], and perhaps even a little for all of Italy, which through my songs I will continue to celebrate with the world. With gratitude, I celebrate this new adventure, full of ideas, new projects and of course music.”

Sir Lucian Grainge, chairman and CEO of Universal Music Group, said: “For over two decades, I have had the privilege to work closely with Andrea. To expand and extend our long-term partnership with Andrea - an artist in the truest sense who is nothing less than a cultural icon - is a thrilling moment for me and for our teams around the world. We look forward to putting the global organization to work on Andrea’s behalf, ensuring his new-music and brilliant catalogue are enjoyed by his millions of fans and discovered by millions more.”

Maverick Management’s Scott Rodger said: “Together with Veronica [Berti Bocelli], Maverick and Almud, I’m proud to start this landmark chapter for Maestro Andrea Bocelli, the most important classical voice of our generation. This unprecedented partnership has evolved from our deep-rooted relationship with the UMG family, building on the defining recording and live global successes that Andrea Bocelli has achieved throughout his career. We are united by our collective ambition and look forward to this new chapter and the iconic moments that Maestro Bocelli will undoubtedly create.”

Michele Anthony, EVP, Universal Music Group, said: “Andrea Bocelli is that rare artist who has the unique ability to transcend the barriers of language, geography and musical genre, to touch millions around the world with his inimitable voice and spirit. It has been an honour for us to work with Andrea and his team to continue to reach and inspire new audiences globally and constantly redefine the boundaries of classical music, even most recently with his historic performance from Milan’s Duomo cathedral during lockdown.”

Dickon Stainer, president and CEO of Global Classics & Jazz, Universal Music Group, added: “In every corner of the world people have taken the unique artistry of Andrea Bocelli to their hearts. We look forward to working even more closely with Andrea on the next chapter of his extraordinary and inspiring musical journey.”

Decca Records co-managing directors Laura Monks and Tom Lewis said: “It is such an honour to strengthen our relationship with Andrea Bocelli, an artist whose global resonance is unique and unmatched in this industry.”

In April 2020, Bocelli’s Music for Hope performance from the historic Duomo cathedral in Milan reached over 2.8 million peak concurrent viewers. It achieved the largest simultaneous audience for a classical livestream in YouTube history. The video received more than 28 million views from across the globe in its first 24 hours and over 42 million views to date.

In 2018, the tenor scored simultaneous No.1 positions for his album Si on the Official UK and US charts.