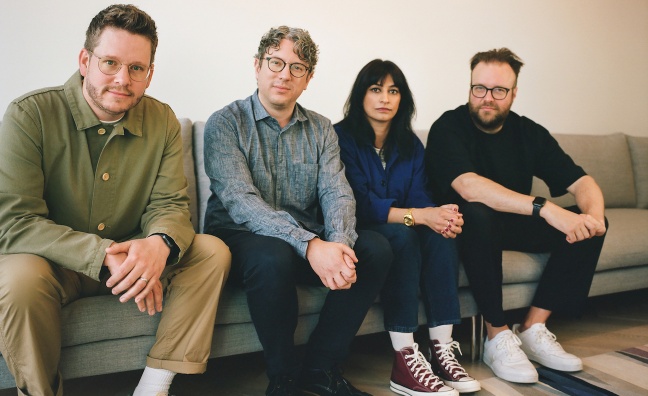 Polydor Records president Ben Mortimer has been busy making changes at the label.

Following the departure of co-president Tom March for Geffen in the US, Music Week can exclusively reveal that Polydor has made a number of key promotions.

With immediate effect, Jodie Cammidge and Stephen Hallowes become co-managing directors. Cammidge was previously promotions director and Hallowes is upped from his position of director of marketing.

The appointments follow last month’s win for Polydor at the Music Week Awards in the A&R category. The label won Record Company Of The Year from 2019-2021. Mortimer and March were a highly successful label co-president pairing for six years.

“We're always thinking about artists, but what we're also thinking about is that sweet spot with amazing artists that sell lots of records,” Mortimer told Music Week following the triumph.

“If there's one thing that Tom and I really got right over the last few years, it is that we've just really built a brilliant team,” he added.

Stephen Hallowes joined Polydor from Beggars/XL in 2009 as digital manager. He was promoted to head of digital, before making the move to marketing, where he was head, and then co-director of the department. He has led and overseen campaigns for Lana Del Rey, ABBA, Mabel, Jax Jones, Years & Years, Haim, Celeste, Glass Animals and Sam Fender amongst others.

ABBA secured the biggest vinyl week one sale of the century with their Voyage LP, while Sam Fender took guitars into the singles chart Top 3.

Jodie Cammidge began his Universal Music career at Polydor, before spending a decade at Mercury (latterly Virgin EMI) where he was director of radio. Since his return to Polydor in the role of promotions director, he successfully grew Polydor’s radio and TV Airplay market share to No.1 label in the UK during 2020 (according to Radiomonitor data). The label made No.2 for radio airplay last year.

These promotions reflect Polydor’s vision of what a modern record company should be, with music, creativity and innovation at the heart of the label

In her decade at Polydor, the multi-award winning Semera Khan has curated creative campaigns with Lana Del Rey, The 1975, James Blake, Celeste, Madonna, Michael Kiwanuka, The Rolling Stones, and Mick Jagger. In addition to being awarded Best Commissioner at the UKMVA’s two years in a row, she was inducted into the Music Week Women In Music Roll Of Honour in 2019.

Alongside her commissioning role, Khan has recently directed videos for Baby Queen as well as Sam Fender, for which she was recognised with a win at the Kinsale Shark Awards 2022. She has also completely revamped Polydor’s creative department to reflect the rapidly changing face of visuals.

Luke Ferrar joined the team at Polydor in 2016 as head of digital. He was subsequently promoted to the newly created position of innovation director, which the label said reflects his “unique ability to identify and harness the very latest in digital technologies and innovations to optimise artist campaigns”.

His achievements include the bold digital campaign he put together for the BRIT Awards 2022, opening up the event to many new areas and technologies, as well as his work as part of the ABBA Voyage team. Polydor noted that he has “successfully assembled a world class digital team who are amongst the best in the business”.

If there's one thing that Tom and I really got right over the last few years, it is that we've just really built a brilliant team

Polydor president Ben Mortimer said: “These promotions reflect Polydor’s vision of what a modern record company should be, with music, creativity and innovation at the heart of the label. Stephen exemplifies a modern executive, as kind and thoughtful as he is driven and intelligent. Jodie is well loved by artists, managers and the wider industry with deep relationships not just in promotions but across the industry both here and abroad.

“Together they complement each other brilliantly, and alongside Semera and Luke - who as anybody will tell you are stars - they have played massive roles in Polydor’s huge success over the last few years. It feels great to be able to recognise that.”

Stephen Hallowes said: “Polydor’s incredible roster of artists and the brilliant group of people I work alongside are what have made us the best label in the business and our success over the last few years is a testament to that. I am thrilled and honoured to have the opportunity to be a part of this very exciting next chapter for the company alongside our entire exceptional team.

“Jodie and I first met and worked together more than 15 years ago and our careers have progressed in parallel ever since. In our time at Polydor we have developed a very close working relationship which I look forward to strengthening in our new roles.”

Jodie Cammidge said: “I feel fortunate to work with an amazingly talented group of people at Polydor. Together we have achieved many wonderful things already and I’m excited to continue building on these successes. Stephen and I have had a close working relationship dating back to the early 2000s at V2 Records and we have a deep understanding of each other’s approach to getting the results we strive for.”