'The pandemic has changed our label for the better': Polydor celebrates Music Week Awards hat-trick 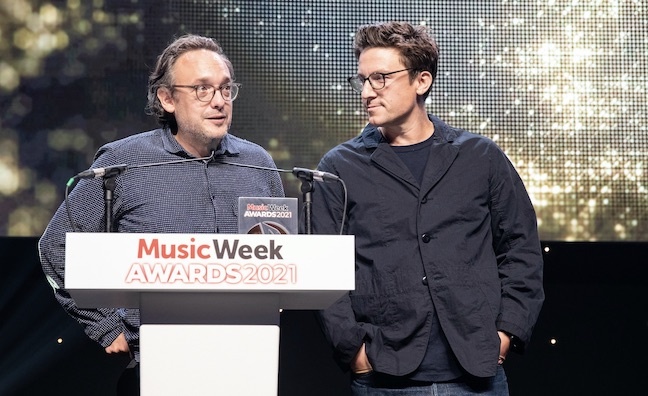 At the Music Week Awards 2021, Polydor made it three wins in a row for Record Company Of The Year, completing a remarkable hat-trick.

But this win was unlike either of the previous two in that it came after a pandemic year, when the company had to rethink virtually everything, in some cases ripping up plans for entire campaigns. Naturally, co-presidents Tom March (right) and Ben Mortimer (left) were beaming when they arrived backstage to talk to Music Week on the night, immediately praising the work of their team, who joined them on stage to accept the trophy.

Here, we hear from the label’s joint leaders on where it all went right in 2020 for Polydor...

How does it feel to win this award?

Tom March: “I’m unbelievably proud. This is for last year, obviously it was a year when the rulebook got ripped up, where we suddenly had to take on this completely new world. We were fortunate as a record company to be able to work, but our artists, managers and our entire team had to dig in and find a whole new way of working. And this [award] is for that. The success of our managers, artists, staff and the entire label, last year, was testament to one of the most challenging times we’ve ever been through as an industry. I just love the innovation we did, a lot of which we’re carrying on with now. We were working from our attics, bedrooms, someone did a Zoom call from a fucking fairground ride at one point. That was Danny, who does our social media.”

Ben Mortimer: “We all saw his arms go up in the air…”

TM: “As he was on the Zoom! It was a wild time, but a really creative time, we progressed and learnt loads, I’m so proud of the work we did. I love winning this award and I want to keep winning it.”

This is three in a row. How does this year compare to the previous two?

BM: “This one was hard. It was a hard year. So many challenges. It felt like we crawled to the finish line a bit…”

TM: “Trying to make records... The challenge the artists and the A&R team had to even make records, and then for them to trust us to even put records out. We just ran at it.”

TM: “We had to get things wrong, try stuff out… So many things we did last year, we’re going to continue doing.”

So the pandemic has changed the way the label will work going forward?

BM: “I genuinely think it’s going to change for the better as well, it’s going to be so much more positive. It’s so good to know that you can communicate with people all around the world. We’ve had more international breakthroughs in the past 12 months than we’ve had previously, and that’s without leaving our living rooms in some cases. It has really revolutionised things and made the world feel a lot smaller, even though we haven’t been able to travel around. That’s something we’re really determined to keep going, because we’ve got a commitment to sort out the planet, the climate and environmental issues. Things like that are massive positive changes.”

TM: “We saw some of the new awards you had tonight, the industry has changed and it will continue to evolve and change. It’s fucking exciting.”

How did the campaigns you ran in 2020 stand out?

TM: “I don’t want to be arrogant, but I think we were fortunate enough to have a nomination in every single category we could this year, even catalogue. It was a year when we had 12 No.1 albums, five No.1 singles, massive British breakthroughs in Yungblud, Celeste. It was a great year for breaking British artists, having huge international success, I think we did Pop Smoke’s legacy proud with one of the biggest selling records of the year, we had a mass global breakthrough in Glass Animals. It’s a year we can be unbelievably proud of, especially considering we did it from our flats or houses, we didn't see each other for a year. I think tonight’s the first time we’ve seen each other! It’s been a great night by the way, I’ve loved seeing everyone from all the labels. It’s been a great evening getting everyone together. That’s a bit off-piste, but it has. That’s why I don’t do the acceptance speeches!”

BM: “They wouldn’t have got the Strat award in!” [Laughs].

You mentioned Celeste, who won Sync Of The Year earlier, what was that campaign like to work on, given the pandemic struck just as she was about to release her debut album?

BM: “I’ve been in music 19 years now and it was one of the toughest times I’ve been through on any campaign, so I can’t imagine what it must have been like for her. Really, really tough. But she found other ways to express herself. And things like sync, they’re so well suited to her. She reminds me a little bit of Michael Kiwanuka on the label. He’s just so sync-able, I mean, they were both up for the award weren’t they.”

TM: “Social media isn’t necessarily her natural habitat, so she had to find different ways through to a lot of artists. Without live, TV and sync were two of our biggest drivers.”