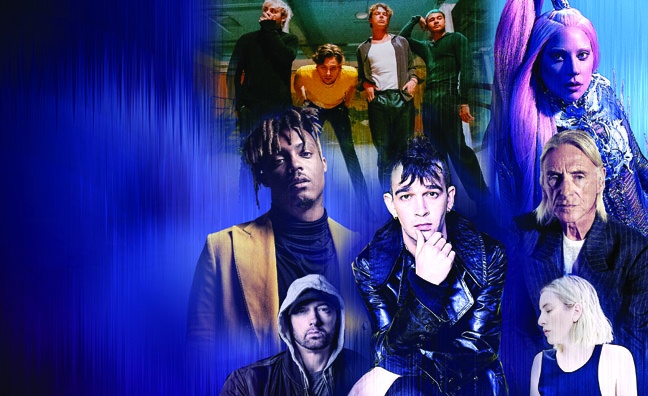 Polydor is celebrating a good run at the albums chart summit in 2020 – seven charting-toppers so far this year, more than any other label.

Following No.1 albums with Eminem, 5 Seconds Of Summer, The 1975, Lady Gaga, Haim, Paul Weller and Juice Wrld, Polydor is now pushing for a chart-topper with Ellie Goulding. It would be label’s fourth consecutive No.1 album.

In the latest issue of Music Week, we speak to the team behind the No.1 campaigns, including marketing execs Jade Bradshaw, Lucy Dann, Karen Dagg, Stephen Hallowes and Ali Tant, as well as Polydor co-president Tom March.

No.1 albums from Paul Weller and Haim highlighted the label’s success with physical music. Weller scored his first chart-topper in eight years with On Sunset, following his return to the label that was home to The Jam and Style Council.

“With Paul, we wanted to be discerning with the products we took to market,” said senior marketing manager Karen Dagg. “He was personally very involved in the production process, and it was extremely important that we didn’t sacrifice quality or the fan experience by overloading on formats or bundling. That said, we did feel there were new opportunities to be had. We produced a beautiful double picture disc and commissioned a series of limited art prints by up-and-coming designers, who each interpreted tracks from the record.

“We balanced the product offering across all our retail accounts by providing exclusives for both D2C and independents, which resulted in delivering fantastic physical sales, whilst maintaining a very high quality suite of formats.”

Juice Wrld became the latest No.1 for Polydor, as the posthumous Legends Never Die opened at the summit. While that was a digital-only release, the label has had physical sales success with many of its big releases.

“In 2019, Billie Eilish sold over 30,000 vinyl pieces and had the second biggest-selling album of the year on vinyl,” said senior marketing manager Ali Tant. “To me this shows there are still a lot of fans who want a product they can hold, they can read and engage with. Glass Animals are about to put out one of the finest pieces of vinyl I’ve ever seen. Don’t let anyone tell you that art form is over.”

He added: “I take huge pride in the fact too that we’re not cutting corners and putting out poor quality product. The 1975’s Notes On A Conditional Form was painstakingly manufactured with the exact recycled material the band wanted in the height of lockdown. I’m immensely proud of that vinyl for many reasons, but mostly because we stuck with the artist’s vision for their physical product.

“Polydor has been breaking its own records with the cassette format, seeing The 1975’s fastest-selling cassette record smashed by 5SOS selling over 12,000 cassettes on their way to delivering them a No.1 back in April.”

For UK-signed Haim, Polydor took the band back to No.1 with their third album, Women In Music – Pt3. The US band last reached the summit with their debut Days Are Gone in 2013.

“Haim proved very interesting as there is a segment of their audience who engage with the more traditional high-end products such as vinyl, but there’s also a younger segment who want collectible items such as cassettes, and to have an interaction with the band,” said marketing director Stephen Hallowes. “So we were able to put together a product offering and D2C strategy that catered to everyone and really maximised sales.

“This year the strategy and resulting incredible chart positions we’ve had for not only Haim and Weller, but also Lady Gaga, The 1975, Selena Gomez and 5 Seconds Of Summer, have all had a very detailed D2C plan at their heart.”

Haim’s album was pushed back by two months as a result of the pandemic, though it ultimately opened up more promo opportunities.

“Haim were a great example of a US-based (albeit UK-signed) act who adapted brilliantly to the circumstances, and we actually did more in the way of content and promotion than we would have otherwise when you get the band in market for a few days around release,” said Hallowes.

“They made two excellent music videos in lockdown, recorded a set for the BBC Virtual Big Weekend, did dance classes for fans on Zoom, delivered TVs remotely for Sunday Brunch and Later… With Jools, did numerous press covers and a livestream from Canter’s Deli around release, which was an adaptation of the deli tour they were doing when the lockdown really hit. And, crucially, they were able to do all this in multiple markets around release. Their approach as a band and as sisters is quite DIY at its heart, so they really embraced the situation and won from it.”

For Weller, there’s plenty of scope for streaming growth with On Sunset. The Modfather has passed a monthly million listeners on Spotify, while Instagram is approaching 100,000 followers.

“On Sunset is such an evocative record that, right at the beginning of the campaign, we decided to create a world of different content as opposed to a few videos that had a limited lifespan,” said Dagg. “We worked with a variety of creatives to produce a wealth of trailers, studio pieces and animations that really brought the record to life. The strategy has been enormously successful, particularly in terms of socials and channel growth.

“We have plenty more to come on this campaign, including the next two episodes of the In Conversation With Paul Weller podcast, which hit No.1 on Apple’s Music Podcast chart. In relation to streaming, it has to be nuanced, you can’t just put spend behind a streaming link and hope you can convert audience behavior. You have to make the whole campaign compelling enough to draw those audiences in and then you’ll see engagement lift naturally across all platforms.”

Polydor won the Record Company category at the 2019 Music Week Awards and is in the running again this year for the title.

To read the full story on Polydor’s chart run, subscribers can click here.