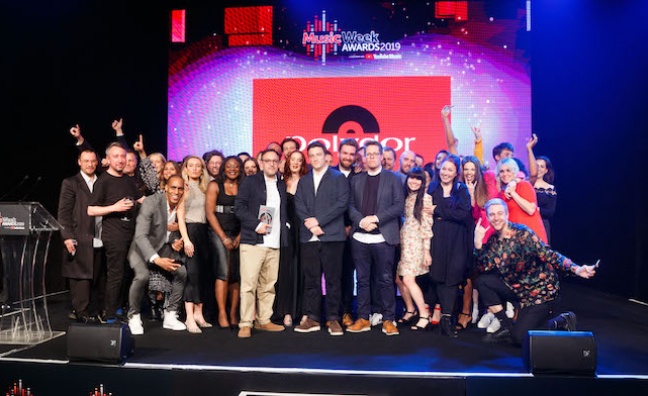 The Music Week Awards 2019 is over for another year and, once again, the best of the best have been honoured at the biggest night in the music industry calendar.

Hosted for the first time by Radio 2’s Jo Whiley, the awards moved to a bigger venue – Battersea Evolution – and drew a 1,300-strong industry crowd to the impressive location. As well as industry leaders, artists including Led Zeppelin's Jimmy Page, Nina Nesbitt and Underworld's Karl Hyde were in attendance.

It was a good night for Polydor and Atlantic, who each won two awards. Polydor, headed up by co-presidents Ben Mortimer and Tom March, won the coveted Record Company Of The Year trophy in recognition of a big year for releases from The 1975, Take That, Mabel, Jax Jones, Eminem and the Mamma Mia! Here We Go Again soundtrack. The label also won the PR Campaign category for The 1975.

Atlantic seized back their Promotions team crown from fellow Warner Music label Warner Bros and won the A&R Award. Briony Turner and Alec Boateng are co-heads of A&R at the label, which is headed up by president Ben Cook and GM Katie White. Following the success of their 2017 Ed Sheeran campaign, the label also had a strong 2018 with a No.1 album from Jess Glynne, the year's biggest debut album from Annie-Marie, the incredible success of The Greatest Showman and its Greatest Showman Reimagined companion release and the Ava Max No.1 single.

Atlantic’s Alec Boateng acknowledged “all the artists who follow their heart and soul”. The importance of the talent was a running theme on the night, with Polydor head of PR Susie Ember and the label co-presidents namechecking the artists.

It was also an evening to acknowledge an industry icon, Darcus Beese, who moved from Island UK to head up the US operation as president last year. One of his signings, Dizzee Rascal, presented the award to Beese at the ceremony’s climax in recognition of a stellar career working with artists including Amy Winehouse, U2, Mumford & Sons, Florence + The Machine, Sigrid and Hozier.

“Mind blown,” said Beese, who strutted elegantly to a Drake tune as he appeared on stage.

As well as his mother, many of Beese’s industry colleagues were in the audience and he received a standing ovation.

“He is a dude, man, you can just listen to music with him,” Dizzee Rascal told the crowd.

In a video message, Bono paid tribute to Beese, who he described as a “prince of a man”.

“Many, many congratulations on getting the Strat Award,” said Sir Lucian. “I’m proud of your achievements and all of us within UMG are proud of them as well.”

“Darcus, I’m so proud of you,” said Joseph. “You’re a natural leader, you’re about integrity, you’re about truth and you’re always about music.”

The successful return of George Ezra last year was acknowledged by the awarding of the Artist Marketing campaign trophy to Columbia.

Sony Music also collected the Music & Brand Partnership gong for the hit collaboration between Paloma Faith and Skoda, as well as winning for Catalogue Marketing Campaign for Britney Spears. It was a double victory for Sony Music Commercial Group who won the catalogue prize last year for George Michael.

Universal Music Publishing Group triumphed in the hotly-contested Publisher Of The Year category, while The 1975 helped Dirty Hit do the business in the Independent Record Company category.

2018 was a big year of change in radio, so perhaps it’s no surprise that there is a new reigning champion in the Radio Station category. After a long run as champions for BBC Radio 6 Music, Ben Cooper’s Radio 1 took the prize.

Whiley referenced her troubled spell as co-host of Drivetime with Simon Mayo by noting that ended on a ratings high - despite the negative publicity and social media trolling she endured.

"Never let fake news get in the way of the actual facts," she told the awards audience.

In the live sector, Ed Sheeran co-promoters DHP Family saw off a strong challenge from Live Nation, AEG Presents and last year’s winner Kilimanjaro Live to secure the win for Live Music Promoter (Company). AEG Presents did take home a trophy for Festival Of The Year, which went to the inaugural edition of All Points East.

The breakthrough success of Dave was recognised with the Manager Of The Year victory for Jack Foster and Benny Scarrs of Neighbourhood Music.

There were also new developments with the launch of the Accountancy Firm Of The Year award (won by Skeet Kaye Hopkins) and the Music Consumer Innovation category, which went to Amazon Music/Alexa.

FESTIVAL OF THE YEAR - All Points East