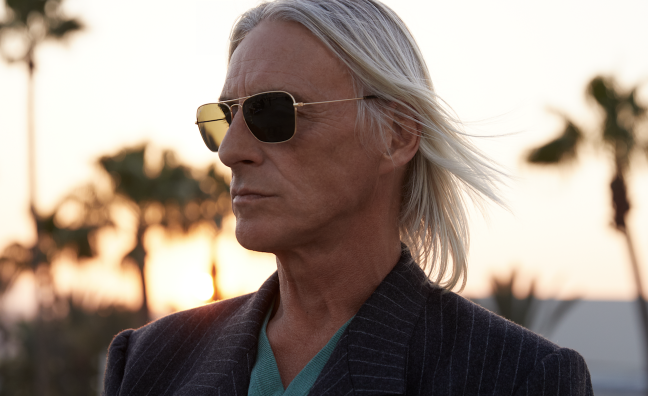 Paul Weller has scored his first No.1 album in eight years.

On Sunset (Polydor) debuted at the top of the chart with sales of 24,011, according to the Official Charts Company. The first week sales were dominated by physical and the album also topped the vinyl chart.

Other acts that have topped the chart across five consecutive decades are Paul McCartney and John Lennon, although neither of them achieved that with entirely new material. The Beatles, Elvis Presley, The Rolling Stones and Bob Dylan have also landed No.1s across five decades, though not consecutively.

“I’m very proud of On Sunset so to have it go in at No.1 is brilliant,” said Weller. “Massive thanks to the team at Polydor for all their hard work.”

On Sunset is Polydor’s sixth No.1 album of the year so far, following chart victories by Eminem, 5 Seconds Of Summer, The 1975, Lady Gaga and Haim. Gaga’s Chromatica is the year’s fastest-selling album so far.

Previously with Parlophone, Weller signed to Polydor earlier this year. The Jam and the Style Council both released their records on the label.

When the news was revealed by Music Week, label co-president Tom March was confident about the album’s chart prospects.

“Paul is keen to explore all the newest, latest avenues for exposing his music to new audiences,” he said. “On Sunset is a really warm, bright, soulful record. I’ve always had success and No.1 albums with Paul in the past and we’re looking to do the same with this record. We’re aiming for the top.”

Speaking about the signing, Weller said: “Polydor are really happening at the moment. They’ve got a great young team and some of my favourite new artists are on it too, with Sam Fender, Celeste and Michael Kiwanuka. I really like their energy and enthusiasm. It’s all those qualities I look for in a record company. It seems very fitting to be back on my old label after all these years.”

In the Top 40 albums, Polydor has secured 13 entries. The label also had the No.2 album with the posthumous release by US rapper Pop Smoke. Shoot For The Stars, Aim For The Moon opened with 19,758 sales, almost all of them from streams. Two tracks from the album secure entries in the Top 20, while Polydor also has Top 5 singles by DaBaby and Lady Gaga & Ariana Grande.