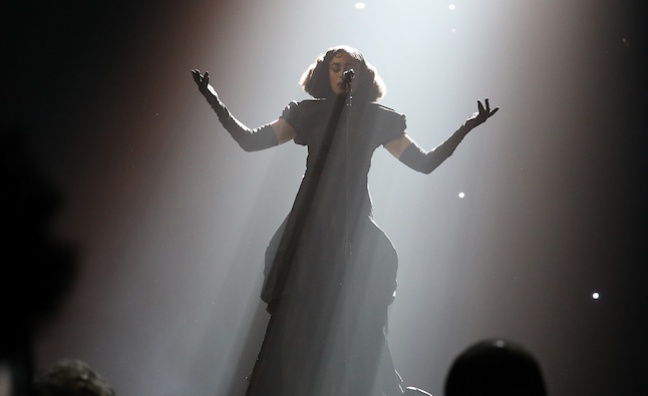 In the last few months, Celeste has gone from finding out she’d won the BRITs Rising Star Award to performing at a star-studded ceremony and being heaped with praise by Stormzy backstage.

Polydor’s big hope for 2020 – a Music Week cover star alongside Maisie Peters last month – silenced The O2 with her rendition of Strange, and the sense that she’s set for big things has duly intensified.

Universal and Polydor execs have told Music Week of their delight in the wake of Celeste’s performance and the singer paid tribute to the label in our cover interview.

“I never knew about the maths that goes into breaking an artist until I became more involved with a label,” said Celeste, who is managed by Ben Smallwood and Duncan Ellis.  “Until then, I thought, ‘I like making music and I’m going to keep trying to make better songs until somebody notices and says, ‘This is really good’.”

"That's a perfect song." The moment @stormzy bumped into @celeste backstage at The #BRITs and told her exactly how much he loves 'Strange' ???? pic.twitter.com/dABHIHKBDV

Celeste stressed how pleased she is that she found Polydor.

“I’m glad it happened with Polydor, all the people there are good people and they’re all really good at their jobs,” she said. “My gut said to go with Polydor from the first time I met them.”

The singer went off to make more music after that first meeting and reflects fondly on the moment she decided to say, ‘yes’.

“I remember my manager telling me that they’d made an offer and I knew straight away to do it,” she said. “The night before, I had a feeling they would do it the next day. I woke up and thought, ‘If someone says that to me today, it’s the time to do it’. The timing has been good so far. There are new opportunities this year and I’m glad I’m in a position to grasp them.”

Polydor co-president Tom March was similarly effusive. “Her voice just blew me away. It was very early, but we knew on the spot Celeste was an artist we had to work with.”

Read the full interview here and revisit the best moments of The BRITs 2020 here.