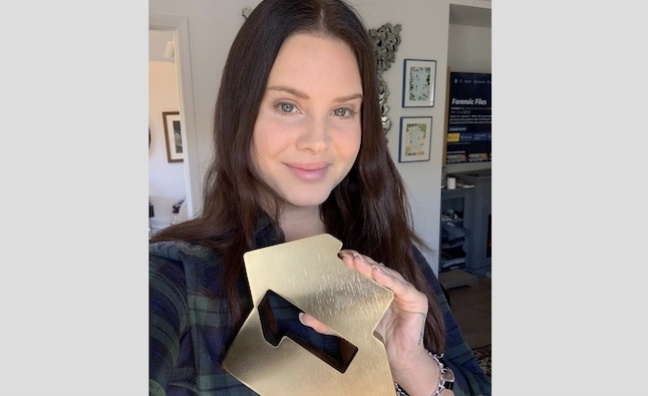 Lana Del Rey has earned her fifth UK No. 1 album with Chemtrails Over The Country Club (Polydor).

With 16,705 vinyl copies sold in the last seven days according to the OCC, Chemtrails… is officially the fastest-selling vinyl album of the century by a female artist, as well as the fastest among all international acts. The overall fastest seller on vinyl since 2000 is Arctic Monkeys’ Tranquility Base Hotel + Casino. Chemtrails… opened with more than three times the vinyl sales of Norman Fucking Rockwell! in week one (4,965).

As a result of Lana Del Rey’s impressive week one sale, Chemtrails Over The Country Club tops both the Official Vinyl Charts and Record Store Chart this week.

Lana Del Rey, who’s managed by Tap Music, now ties Celine Dion for the fifth most No.1 albums by a female solo artist in the UK. Only Madonna, Kylie Minogue, Barbra Streisand and Taylor Swift have claimed more.

Lana Del Rey's White Dress, the opening track on the album, debuted at No.51 on the singles chart (7,247 sales), with further entries for the LP title track at No.62 and Tulsa Jesus Freak at No.81.

Chemtrails Over The Country Club helped Polydor secure No.1 in the market shares for AES (All Albums) on 10.7% and AES (Artist Albums) on 10.9%. The label also has the No.1 single with the Wellerman remix by Nathan Evans, 220 Kid and Billen Ted.

Subscribers can click here to read out our interview with Lana Del Rey along with the label, management, publishing and co-writing team on Chemtrails Over The Country Club.