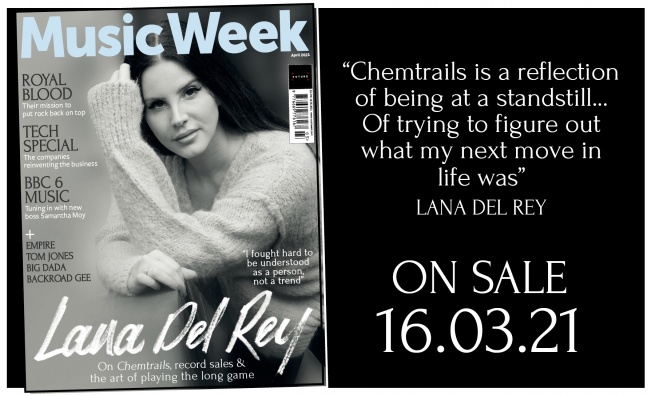 Music Week is delighted to reveal Lana Del Rey as the cover star of our new monthly print edition.

In our huge cover feature, Music Week speaks to the revered artist and songwriter as she prepares to release her brilliant, eagerly-anticipated new album Chemtrails Over The Country Club. Arriving hot on the heels of her critically-acclaimed, No.1 album Norman Fucking Rockwell! in 2019, not to mention 2020’s poetry collection/spoken word LP Violet Bent Backwards Over The Grass, we meet an artist on a red hot streak. In a wide-ranging conversation, Lana talks about the making of the record with Jack Antonoff, songwriting, how to deal with fame, plus how she fought to be understood as an artist, not a music industry trend.

Starring alongside Lana to give campaign insight are her Music Week Award-winning managers, Tap Music’s Ben Mawson and Ed Millett, as well as Polydor co-president Tom March and Sony Music Publishing president & co-MD David Ventura. Plus, we speak to legendary songwriter Rick Nowels – who has worked with Lana on all of her albums to date – about their studio experiences together.

Here, we present you with the full story of what is set to be one of 2021’s biggest records.

BBC Radio 6 Music’s Samantha Moy has been in the top job at the station since last year, and with the 6 Music Festival coming up, now is the perfect time for the star radio exec to lay out her grand plan in The Music Week Interview. With tributes from BBC pop controller Lorna Clarke and some of 6 Music’s biggest names, Moy shares everything you need to know about 6 Music’s new era.

Rock revolutionaries Royal Blood are about to unleash their third album Typhoons, and we catch up with Mike Kerr and Ben Thatcher to hear the stormy tale behind it, while Warner Records boss Phil Christie, Warner Chappell’s Amber Davis and Wildlife Entertainment’s Ian McAndrew share the campaign secrets.

Elsewhere, we meet Empire founder and CEO Ghazi Shami to hear how his San Francisco-based label and distributor has powered hip-hop hits and led the way on industry transparency in the streaming era. As well as looking back at Empire’s success with artists including Anderson Paak, Xxxtentacion and Tyga, we get insights on the 100% independent company from recent signing Busta Rhymes.

Plus! Hip-hop label Big Dada unveiled its new mission statement in January, and now we hear from label heads Victoria Cappelletti and Alex Ives – plus members of their team and artists Roots Manuva and Yaya Bey – about their mission to bring through a new generation of talent and executives and eradicate racism and discrimination in the music business.

Finally in features, this month’s special report gathers the biggest names in independent publishing to find out how the sector is faring during the pandemic.

In Hitmakers we speak to Tricky Stewart, the man behind some of the biggest pop songs of all time – from Beyoncé’s Singles Ladies to Justin Bieber’s Baby. Here, he recalls how a bit of studio rewiring on a quiet day led to the creation of Rihanna’s all-conquering smash Umbrella. In Aftershow, meanwhile, the one and only Tom Jones guides Music Week through his career, including some memories of chatting with Elvis...

In this month’s Big Story, we get the lowdown on the latest big plans from Atlas Artists – the management team behind chart-topping UK star Celeste. Elsewhere, Warp Records and ATC Live reveal their ambitions for the debut album from buzz band Squid.

In our Spotlight Q&A, Amy Dietz opens up about ambitions for new company Exceleration Music, the impact of streaming on independent artists and her proudest moments from a career that included senior roles at Ingrooves and ADA. Also in Frontline, you’ll find multi-camera angle streaming platform Multiview Media in new tech feature Start Me Up plus DJ Semtex talks about his Hip-Hop Raised Me project in In Pod We Trust.

Energetic East London rapper BackRoad Gee maps out his musical vision and reveals all about his new mixtape in On The Radar, and brand new Dublin singer/songwriter Lucy Blue stars in Making Waves. Our latest Tastemaker is Link Up TV editor Wardah Sempa, and there’s a big Sync Story featuring jazz drummer Karl Zine and Virgin.

For this month’s Mentor Me page – a collaboration between Music Week and Girls I Rate – we welcome Wizkid manager Jada Pollock to get her Top 5 career tips for making it in the music industry.

Deviate Digital boss Sammy Andrews looks at the world of monetizing fanbases in her Digital Discourse column while Music Venue Trust CEO Mark Davyd gets to grips with live music tarrifs in Centre Stage. As ever, the expanded Archive section sees us flick through the pages of the Music Week of yesteryear.

The new issue of Music Week is available to subscribers from March 12 and on the news-stand from March 16.