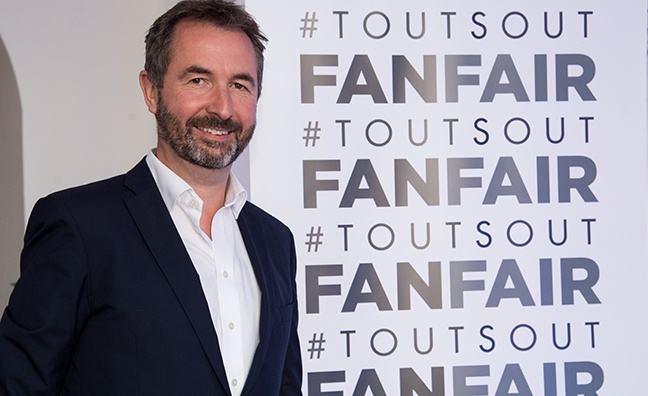 Arctic Monkeys manager Ian McAndrew has told Music Week that the Sheffield band are busy working on music for the follow-up to Tranquility Base Hotel & Casino, as they return with a new live album.

Recorded in 2018 and mixed this year by James Ford, Live At The Royal Albert Hall is the group’s first official live album. Out this week, it has just ticked past 20,000 sales, according to the latest Midweek figures from the Official Charts Company. It is currently at No.2 in the albums chart, behind Yungblud’s Weird.

Wildlife Entertainment CEO McAndrew spoke to Music Week alongside Domino boss Laurence Bell about the release, which they organised to raise money for War Child. Arctic Monkeys, Domino and all publishing and streaming partners are donating 100% of the album’s proceeds to the charity.

The release comes after the band’s Crowdfunder campaign for The Leadmill and the Music Venue Trust in the summer, which raised £128,544.

Both McAndrew and Laurence Bell praised the power of Arctic Monkeys’ fanbase in the interview – which subscribers can read in full here – and said the live record marks a special release for the band.

“They have a really fantastic fanbase, one that has just grown and grown and continues to grow and that’s the thing that is always really impressive,” said McAndrew. “Even in this time of quiet and inactivity, interest in the group doesn’t dissipate, if anything it grows during the times when the band are quite quiet. Being able to harness that in a positive way to help support a charity facing huge challenges and those children suffering unimaginable hardship, is a really gratifying thing.”

Here, in an exclusive extract from our conversation, the manager digs into the detail of the live album and opens up about what else Arctic Monkeys have been up to in 2020, including how the pandemic has affected their plans to record new material.

Was a live album from the Albert Hall show always the plan?

“That show was the first London show in support of Tranquility Base Hotel & Casino. We chose the venue and we decided that we would donate the proceeds from the show to War Child. We did record it, but we record most shows, so that in itself isn’t hugely unusual, except on this occasion we did bring in an outside recording facility. It was in the back of our minds that we may look to make a live record and now it’s come to fruition. The thing that has provoked that is the impact that Covid-19 has had on War Child’s funding this year and for 2021. It’s had a drastic impact and caused a £2 million deficit. So we had a conversation in the summertime and revisited those recordings. We all remembered it being a really great night. We invited James Ford to mix the tracks, which he did very kindly, and we prepared it for release.”

What does the album capture?

“This was going to be the first time they performed songs from their new record in London, and obviously the Albert Hall is always special, it always has that sense of occasion. There was a level of nervousness, maybe, about performing these songs for the first time. And that’s what makes this show particularly memorable. Songs like Tranquility Base Hotel & Casino, Star Treatment and One Point Perspective were still fairly new. We were performing with a different line up, we were a six-piece band, and those particular songs are quite a lot more sophisticated in many ways, more musically demanding. It was great to capture that in such a great setting. That’s what underpins it as a special occasion.”

“That’s right. There’s always a level of heightened tension playing in London, I think that’s true with most groups. Everyone is on their game somewhat. I remember coming into that show and everyone being very on their game. It was a great night.”

How does it feel to have a new Arctic Monkeys release out?

“I’m just really pleased, this year’s been a very challenging year for people and being able to put out a piece of music from the band is great, hopefully it can bring some cheer to what’s otherwise been a pretty dreary year.”

What else have they been up to this year?

“They’re working on music. In this rather disjointed time, the guys are beavering away and I hope that next year they’ll start working on some new songs, new ideas, with a view on a future release.”

Are there any fleshed out songs yet?

“Well, you never know! What I will say is that they’ve been working hard and I’m so looking forward to hearing new music from the guys in the new year. There were recording plans in the summertime that got canned as a result of the travel restrictions. I think with most bands, certainly the other bands we work with as well, it’s had a pretty significant impact on, on those artists recording and writing and certainly the ones that hoped to release records and promote them with touring. Trying to make records and create music at this time has been a little bit more challenging, primarily because of restrictions on travel, and that’s what has presented some issues for Arctic Monkeys. It’s also presented an opportunity in some ways. If you’re literally locked down, you’re going to knuckle down to some work at home, and that’s what’s been going on.”

Have you heard anything new yet?

“Oh, I get to hear things from time to time. When the restrictions permit I do get along to have a listen to what’s going and to check out some new ideas, which is always very exciting. We periodically get together and check out stuff. We haven’t really started any proper work, any recording with a full band, and that’s because the guys aren’t able to be together. I’m hoping that next year, when the restrictions lift, we’ll be able to get together and get on with it.”

“We followed that release with a fairly robust touring plan that went on until October 2018. There weren’t any prearranged plans to get back in the studio quickly, so I don’t quite know the basis of that rumour honestly. It’s fair to say that plans to write and record music have been deferred or postponed in terms of difficulties in getting together. Nevertheless, it in some ways creates a welcome opportunity, more time, more space and ability to go away and devote a bit more time to the creative process. That’s been a blessing in a weird way.”

Have they been working together remotely over Zoom?