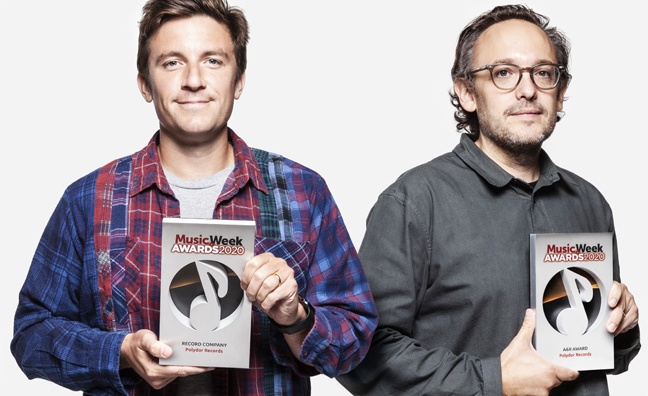 Everyone at Polydor Records must be feeling pretty happy today.

For a start, at yesterday’s Music Week Awards, the label picked up a double: retaining the Record Company crown it won last year, and scooping the A&R Award as well. And, thanks to the coronavirus pandemic ensuring we were unable to hold a ceremony this year, they didn’t even have to deal with the traditional morning-after-the-night-before.

“Could you imagine the hangovers?” quipped co-president Tom March (pictured left) when he learned the news. “We’re lucky we’ve dodged that, it would’ve been Glastonbury levels!”

And March and his Polydor co-president Ben Mortimer (pictured right) have had their fair share of celebrations since Music Week revealed they were taking over the fabled label in 2016. Since then, they have restored the Universal-owned label to its former glories, enjoying a string of huge successes both domestic – Mabel, Sam Fender, Take That, Ellie Goulding – and international – Blackpink, Billie Eilish, Eminem – and once again challenging for the market share No.1 spot.

No wonder Mortimer declared the MWAs triumph as “fantastic, absolutely brilliant”. “We don’t take it for granted in any way,” he added. “And the bit we’re really chuffed about is getting both awards – to get Record Company and A&R means a lot, it really does.”

But even all that isn’t enough for the ambitious pair, as revealed when they sat down with Music Week to talk about what’s next for the company…

You managed to break several artists in 2019 to win the A&R Award. But how hard is it get new artists away in the current situation?
Tom March: “You can’t sit there waiting for things to get back to normal or thinking they’re going to change. Just because it gets to the end of the year and flips into a new year, it’s not necessarily going to be different. Just because we’ve all got some shows on sale for April/May next year that are all selling really well, thankfully, that doesn’t mean we’re going to get back to normal. You’ve got to remove that and work within the environment we are currently in and expect that to stay as it is until we hear any differently.”

So what can you do?
TM: “It’s about trying to work within what we’re allowed to do while looking at other opportunities. There’s so much you can do at the moment with creators, influencers and social media. You can light fires all around the world with new artists by embracing where audiences are and how to get in front of those audiences. That’s what we’re trying to do with a lot of our emerging artists – with some it’s easier than others, but there’s always a way that it can work for an artist, you’ve just got to find the right path. It’s challenging, but it’s about being a team that can be nimble and creative and still, through all of this, make it happen. So, while it’s incredibly challenging, I still feel very positive about breaking artists, putting out great records and having success. It’s just a little bit different.”

You’ve not actually been running Polydor for that long – where are you in terms of your plan?
TM: “I feel really positive about a lot of the promotions we’ve made. There’s a new wave coming through the label. We like to promote from within and it’s really important to hire people young, train them and teach our team the way we like to do things. And there are more moves we want to make. We are modernising the label and the departments. We’re trying to make sure we’re always at the forefront. We were the first label in the world to hire someone to look after creators and influencers, and we’ve now got four people in that department. It’s about enhancing what our artists and managers need from us and making sure we’re as futureproof as possible. We always try to be one step ahead.”

BM: “There’s no way anyone’s resting on their laurels. We are all competitive people – some of us show it more than others! It’s hard to be on top all the time but you definitely want to be up there. There are a lot of other labels that I respect doing really good stuff at the moment and that adds to the whole thing, it keeps you competitive. So no one’s sitting back here.”

What drives you on?
BM: “We’re all driven by different things and there’s a really good blend of that at Polydor. I always want to put out the best music we can, I’m obsessed with that. And there’s a magic blend at the moment that drives it on together.”

TM: “We’ve got lots of personality types but we’re a team that’s really grown together. Everyone’s buzzing to be there, our team love what they do, they love the label and the artists. I genuinely get that sense of pride in what they do.”

You’re very close to being No.1 on Music Week’s market share charts – is that a goal for you?
TM: “Honestly, we don’t look at it, and it’s not something that David [Joseph, Universal Music UK chairman/CEO] ever mentions to us. But that happens naturally if you’re putting out good records that are successful. It’s not something we necessarily use as a yardstick for success – it happens because of success.”

So what does motivate you?
BM: “Breaking artists is always the thing. It gives you that extra swagger. It’s still the best feeling in the world. It’s that combination of doing the right thing by your artists, breaking artists and also running a good company. We want Polydor to be renowned for being a good, fun, creative place to work.”

You’ve also been having a successful 2020. Are you starting to think about the MWAs threepeat?
TM: “I hope so! We like to set the bar high. Ultimately, you can’t plan for winning the award, you hope you and your team do such a brilliant job through the year that you make the voting relatively easy for people. And we’re already having a cracker of a year. But you don’t get given this, you get there through hard work and results – and that’s how we like to be judged.”

BM: “There’s no way anyone’s resting on their laurels. It’s hard to be on top all the time but you definitely want to be up there. So no one’s sitting back here. We all watched The Last Dance during lockdown, and three is really hard. But hopefully we can get there…”

TM: “We want to be the Chicago Bulls – that can be the headline!”

* To read the full interview with Polydor and all the other 2020 Music Week Awards winners, see the new special celebration edition of Music Week magazine, available now. To subscribe and never miss a vital music biz story, click here.