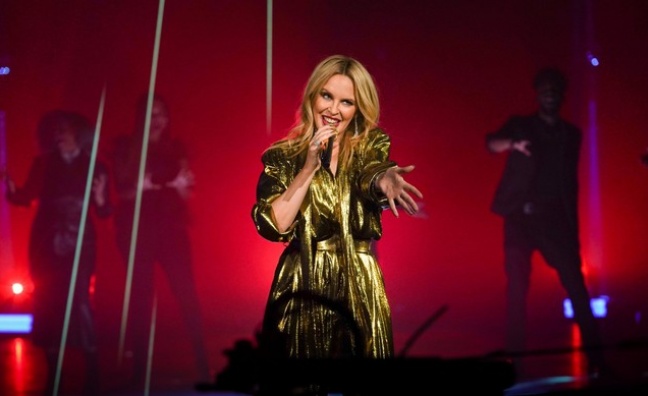 BMG’s Alistair Norbury has spoken about the success of the Kylie Minogue campaign and the company’s streaming performance.

Speaking in the all-new monthly Music Week, BMG UK’s president of repertoire and marketing reflected on how the reshaped roster - including breakthrough star KSI - is boosting the company on DSPs.

According to Official Charts Company data, the No.4 music company grew track streams by 25% year-on-year in 2020 compared to market growth of 18%. BMG racked up 1.58 billion streams last year.

“We have ambitions to continue the streaming growth,” said Norbury. “The type of acts and flavour of the roster will continue to include a healthy mix of the established, iconic artists that we’re known for. But after KSI’s success, there’s a strong appetite to start being more consistent and not have sporadic single hits. So there will be more coming in that lane.”

Kylie Minogue has grown her streaming presence, with almost seven million monthly listeners on Spotify. Norbury said Minogue has a “hunger” for further success following three consecutive No.1 records since she signed to the company.

“There is a hunger,” he said. “There’s going to be more repertoire coming. This record lends itself very nicely to remixes, features and collaborations.

“We partnered on the successful livestream [Infinite Disco] that we did with Driift. We’re looking at ways that we can maintain this campaign all through the year. There are a lot more ideas to come - and many of them, creatively, come from the artist, which is very exciting.”

Globally, Minogue’s streaming on this album has grown considerably in markets including Brazil, Mexico and France.

“For Kylie, the worldwide streams on this album are at about three times the rate of the previous record, Golden. So last year was about, ‘Can you grow an artist to the next level?’” After the huge success we had with Kylie and Golden, and then with the best of [2019’s Step Back In Time], to continue that trajectory upwards was terrific.”

Norbury suggested that Disco was the right kind of album at the right moment during the pandemic.

“It dropped at the time when an up-tempo, feelgood record was what people needed – and you saw that with the Dua Lipa record and various other records,” he told Music Week. “So there was momentum.”

While the campaign had to adjust to the pandemic, Norbury said that digital marketing ultimately helped deliver stronger comparative sales than Golden in 2018.

“There is a big question mark over how we’re going to go back to marketing and promoting music internationally [after Covid],” he said. “Because we’re successfully seeing sales increase without artists necessarily having to fly around the world and be everywhere at once, which is good.”

Norbury also highlighted the momentum created by three No.1 campaigns from Minogue in the last three years.

“Being bold, going to Nashville and making the Golden album was exactly the right thing to do,” he said. “And then in 2019, playing Glastonbury [the legends slot] and releasing the greatest hits to have a second No.1 [with BMG]. The following year, it was about not leaving it too long [for the next album]. The lockdown almost forced her hand to crack on and do something in that time.”

Kylie Minogue’s label boss previously revealed to Music Week that she learned how to work with music software Logic in a home studio during the pandemic.

Norbury credited the “absolutely exceptional” work of the BMG team and A&P Artist Management on the Disco campaign.

“Kylie is absolutely directly involved on a daily basis with what’s happening,” he said. “Having now worked on three releases over three years, all of which have been No.1 albums, it means there’s a real confidence and trust in the team. She’s a wonderful artist to work with.”