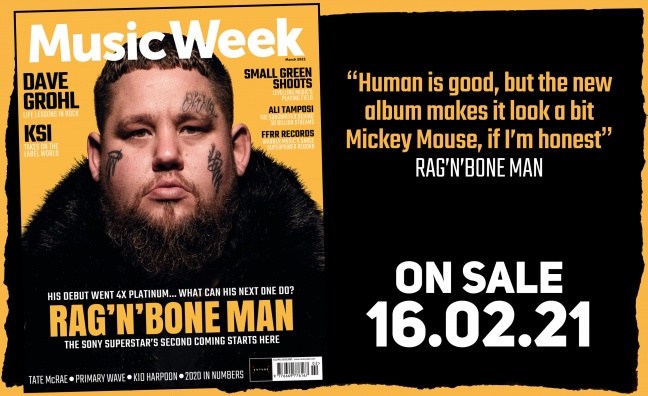 Music Week meets the star (real name Rory Graham) to launch one the biggest and most anticipated album campaigns of 2021, as Columbia and Sony Music UK prepare to release Life By Misadventure, the follow up to Rag’N’Bone Man’s 4x platinum debut, Human.

Graham is one of the biggest UK breakthrough artists of his generation, and he and his team tell the epic story of his second coming in the cover feature. Life By Misadventure was written and recorded in Nashville, Tennessee with some of the biggest names in the business – including Allen Shamblin, Mike Reid, Natalie Hemby and more – and its release marks a new era for Graham, who’s swapped the blues sound that made him famous for a new direction informed by folk, country and rock’n’roll.

KSI is the inaugural subject of the all-new Music Week Interview feature, which profiles the biggest names in the industry each month. The former Music Week cover star was the biggest-selling UK debut act of last year, and now he reveals the fascinating next step in his music business journey, alongside BMG’s frontline boss Gemma Reilly-Hammond and his manager Mams Taylor.

Following a year in which she made hits for Dua Lipa, Miley Cyrus and more, Music Week meets 30 billion-stream songwriter Ali Tamposi and her team to chart her journey through the music industry.

Finally in the features section, there are special reports on label services and accounting, plus Music Week’s year-end analysis, which gathers the UK commercial gurus from Universal Music, Warner Music and Sony Music to unpick the big stories from 2020’s figures.

The expanded Key Releases page now features Incoming, a monthly Q&A with an artist about their upcoming album, and Campaign Trail, where leading executives reveal the secrets behind their biggest releases. This month, Madison Beer looks ahead to her debut Life Support and Polydor co-president Tom March discusses the major’s plans for Lana Del Rey’s Chemtrails Over The Country Club.

Primary Wave boss Larry Mestel launches Spotlight, a new Q&A feature in the Frontline section that shines a light on the industry’s biggest names. Also in Frontline, you’ll find new tech feature Start Me Up as well as In Pod We Trust, which profiles the biggest names in music podcasting.

Also in the Frontline section, Ben Wynter explains PRS Foundation’s new Power Up project in The Big Story, while BMG’s Alistair Norbury reflects on the label’s success with Kylie Minogue and looks ahead to 2021.

Music Week has partnered with Girls I Rate for the all-new Mentor Me page, which will see black female music executives offer their industry tips. Girls I Rate founder and Grammy Award-winning songwriter Carla Marie Williams stars in the first edition.

Music Week has worked closely with our partners at the Official Charts Company on a brand new and expanded monthly charts section. We are proud to present the Top 75 Singles and Albums of the month, accompanied by revamped analysis pages, plus a host of new listings. These include specialist genre Top 20s for Americana, Classical, Hip-Hop & R&B, Jazz, Country, Dance, Folk and Rock & Metal, which have never previously featured in Music Week. The issue is also home to streaming, compilations and vinyl charts.

Last but by no means least, in recognition of its integral role in breaking new artists and its ever-increasing impact across the business, Music Week is delighted to team up with TikTok to provide exclusive data and analysis of the biggest trending songs on the platform.

George Garner, Music Week’s Head of Content says, “For the past month the Music Week team has been working around the clock to present you with our first-ever monthly edition. I’m enormously proud of what we’ve achieved – a forward-looking magazine that celebrates the achievements, innovations and diversity of the most exciting business in the world. The new incarnation of Music Week includes everything you loved about our past iteration with lots more added besides – including all-new features such as our Mentor Me section in collaboration with Girls I Rate, which sees the most influential and successful women across the music and creative industries share their Top 5 career lessons. We are also incredibly excited about presenting our readers with our new monthly charts analysis and coverage in conjunction with the Official Charts Company, which offer an all-new way to look at the singles and albums charts – and that’s not to mention the publication of some new charts we have never included before. We can’t wait for our readers to see what we’ve been working on.”

Stuart Williams, Music Week’s Managing Director says, “This is an exciting time for Music Week, as we move into a new phase of our long history. The new monthly magazine forms the beating heart of the brand, alongside next month’s  Tech Summit, the forthcoming Music Week Awards and our daily online coverage.  We’re there to champion the music biz through thick and thin - the definitive voice of the industry -  and we thank all our friends and colleagues for their ongoing support.”