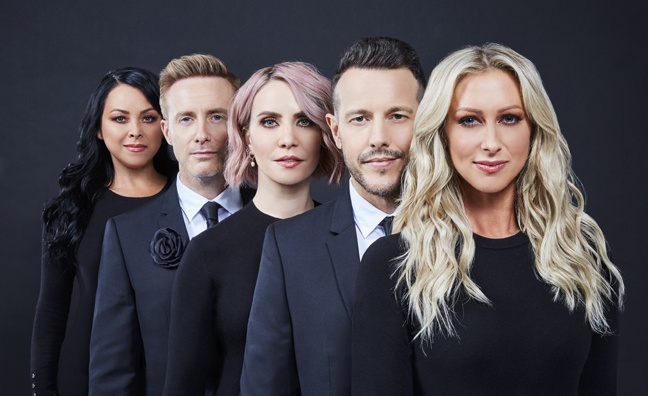 In a recent issue of Music Week, we spoke to Claire Richards, Faye Tozer, Lisa Scott-Lee, Ian ‘H’ Watkins and Lee Latchford-Evans, plus Fascination Management and BMG to get the story of their comeback.

What The Future Holds is proving to something of a victory lap for the group. In 2017, they released their Tears On The Dancefloor album as a DIY endeavour after a host of labels turned them down. The result? A gold-selling album and a sold-out 22-date arena tour, shifting 200,000 tickets. Ahead of its release, the group told us about their expectations for its follow-up.

“I still have nerves, because it would be arrogant to just expect it to happen [again],” Claire Richards told Music Week. “When arrogance sneaks in, you drop the ball and the quality isn’t as good. We all really, really care about what we do, and the quality of what we do. I think the majority of the music industry just doesn’t understand Steps: what we are, who we are, what we do. The perception from the outside is just that we are this novelty act that’s all just for a bit of a laugh, and it’s not a serious thing. Last time around, the record companies didn’t want to know so we did it ourselves. And it was great. We had a massive success with very limited resources and limited funding.”

With their new partners at BMG, Steps have gone all out. Not only is WTFH full of pop bangers penned by elite songwriters like Sia and Fiona Bevan, it’s also received a royal roll-out of physical editions. The record is being released on CD, vinyl (plus a limited edition transparent pink edition) and cassette, including a special collector’s box with five separate transparent pink solo cassettes with an intro from each band member.

What does What The Future Hold say about Steps in 2020?

Jamie Nelson: “The album is modern and relevant pop music, but they totally understand their fans and what they want. The first single , What the future holds , was written by Greg Kurstin and Sia - it’s a great statement and has made a real connection at radio.” We’re delighted with the reactions to the singles. It’s not complicated: great songs connect with people, and the singles have had an amazing reaction, which is why the album is setting up so well.”

A host of labels passed on working with Steps last time around. Why did you want to work with them so badly?

JN: “Well, firstly, I don’t really care about how the other labels view Steps or any other projects we are looking at. We love working with artists across all genres – and we love working with artists who understand their audience. Steps have a vast one, and are unapologetic about bringing joy to their fans. Also, Adam [Klein] and Peter [Loraine] who manage Steps are amazing, and I’ve been keen to work with them for a while. We had discussed other projects before and this felt like the perfect fit.”

How difficult a proposition is launching a Steps album without them being able to tour straight away?

GR-H “We are all adjusting to the new ways of doing things. It felt really timely to get the new album out to fans at this time. It’s a really positive record and we were keen to give the fans something optimistic to enjoy. Management were very quick to read the market and adjust the tour plans which gave us the optimum time to discuss and re-plan. We very quickly concluded that it felt right to put the music out there this year for the fans. We were fortunate, working closely with management and AEG to be able to announce the Arena tour (for November/December 2021) with the album and run a pre-order for pre-sale access which was great. We also aligned the two promo and marketing plans to fully complement each other driving both album pre-orders and ticket sales. Ultimately, when you have great music that is going to get on the radio and a hard-working artist and management team, to actually be able to fully focus on the album campaign has been a very positive experience. Steps have an amazingly engaged fan base online that really support them and their new music and it’s been great to be able to deliver this album to them in what is a very uncertain time. The other positive is it has allowed us the privilege to build an 18-month campaign and there are lots of exciting plans already forming for 2021.”