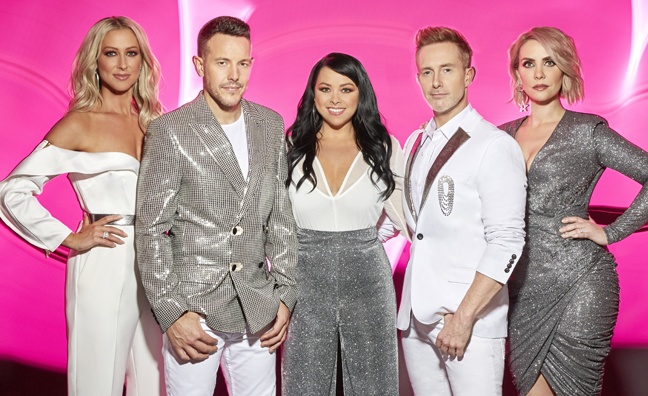 In the new issue of Music Week, we welcome returning pop titans Steps to our cover ahead of releasing their sixth album What The Future Holds this Friday (November 27).

The album should be something of a victory lap for the group. In 2017, Steps released their Tears On The Dancefloor album as a DIY endeavour after a host of labels turned them down.

“I couldn’t get anybody anywhere to buy into my plan or my belief,” Fascination Management’s Peter Loraine told Music Week. “I found that incredibly frustrating. I was like, ‘They’re in the Take That lane here, they’re not in the lane of whoever else you might see on a retro tour’. They toured so phenomenally in their day and sold millions of records. To me, it was, like, ‘This is a really big deal.’”

So it was that Steps and Fascination – completed by Adam Klein, Kirsty Richardson and Sarah Jackson – partnered with Absolute Label Services for their fifth album.

“We were only independent because nobody else wanted us,” Ian 'H' Watkins told Music Week. “The facts are facts. We shopped around every major and every upcoming label and nobody would touch us with a barge pole. We went, ‘OK, if we’re doing this, we’ll do ourselves!’”

The result? A gold-selling album and a sold-out 22-date arena tour, shifting 200,000 tickets. In our new issue, Claire Richards, Faye Tozer, Lisa Scott-Lee, Ian ‘H’ Watkins and Lee Latchford-Evans, Fascination Management and their new label BMG if they can do it all over again.

Here, in an unread extract of our cover feature interview, Fascination Management’s Adam Klein takes us further inside their huge comeback…

Before we get into the new album, let’s first get your take on the last one, which obviously went down incredibly well. What did you do right with hindsight?

Adam Klein: “The last campaign originally started as a celebration of 20 years of Steps and our goal was to remind people how incredible this band and their catalogue were. However, they had already done the big reunion tour and accompanying reality show and we didn’t want to rest on past glories alone. We therefore decided that new music was the key to unlocking modern promotion and really cementing the band’s place as an act who could consistently tour and release successful, current music. The moment I first heard Scared Of The Dark as a rough vocal/piano demo I knew it had all the ingredients of a classic Steps song – huge hooks, bittersweet lyrics and even a key change. Between that and the follow-up Story Of A Heart by ABBA’s Benny Andersson and Bjorn Ulvaeus, we knew we had the ingredients for a proper comeback that both fans and media would need to take seriously. Working with Mark Dowling and the team at Absolute was a real pleasure and they helped make that record the success it was. The 2017 Party On The Dancefloor tour was the icing on the cake – it was the biggest pop party and spectacle of the year and cemented the band as a must-see touring act.”

Steps have been very open about how everyone turned them down, not just in terms of labels but also managers. Why was Fascination different? What potential did you see in them?

“I experienced Steps the first time as a listener while Peter experienced them from the media side as the editor of Top Of The Pops. Their incredible touring history and their level of sales over the years is undeniable.  Matched with our love of pop music, we knew that the we could help Steps become the enduring legends they’ve always deserved to be. They’ve never toured or released music without their full line-up, which is rare and something that sets them apart.”

Given that you had just enjoyed so much success via the DIY route, why did partnering up with BMG make sense this time around?

"We’ve admired BMGs incredible work with Kylie, Jack Savoretti and Rick Astley for many years. The expertise and track record of success that the combined team of Jamie Nelson, Gemma Reilly-Hammond and Louise Hart have between them is unparalleled and we knew they would be able to bring this new Steps project to the next level. From our first meetings, it was clear they respect everything Steps stand for and understand what they are about, something that many labels don’t.”

So what does this new album say about Steps in 2020?

“Having Sia and Greg Kurstin contribute the first single and title track What The Future Holds is testament to how Steps have transitioned into a current act. The album certainly has nods to their past, namely on second single Something In Your Eyes which is old school Steps at their finest and Heartbreak In This City which saw the band reunite with Karl Twigg, who wrote some of their biggest hits like One For Sorrow, Stomp and Deeper Shade of Blue. On the flipside, there’s the icy cool Scandi pop of Father’s Eyes, modern electronic disco of To The Beat of My Heart and some really grown-up midtempo tracks like Under My Skin and Clouds which reflect where the band are in their lives personally. The album was mainly produced by the brilliant Barry Stone and Julian Gingell from The Alias who oversaw Tears On The Dancefloor. They truly understand the Steps sound and instinctively know how to arrange and layer male/female harmonies. Their background as accomplished remixers gives the uptempo songs on the album a really contemporary feel. We’ve been lucky enough to work with some brilliant writers on the record including Fiona Bevan, Carl Ryden, Rachel Furner and Jez Ashurst amongst many others.”

Have you been pleased with reaction to the singles so far?

“I was always knew it was going to be difficult to top the reaction to Scared Of The Dark which launched the last album campaign and has become a permanent fan favorite. What The Future Holds is such an incredible record and from the moment we heard Sia’s demo, we knew we had our first single and the template for the album. Seeing the reaction to the song has been incredible – it jumped up to No.1 on UK iTunes within an hour, even quicker than Scared Of The Dark, and was consistently one of the most-played tracks at BBC Radio 2 where it stayed on the playlist for five weeks.”

What do you admire most about them personally?

“Unlike so many others, Steps 100% know who they are as a band both musically and visually and embrace it. Making music with them is an absolute joy because they know their fanbase so well and always strive to make the biggest and best pop records possible. They are willing to take the risk of being true to themselves musically, even when it’s not necessarily trendy. They also have great business minds, so working together is a true partnership – they understand their brand and business model well and have so much experience to bring to the table."

What’s been the guiding management principle that’s seen you through with Steps since their return?

“‘One foot in the past, and one foot in the future’ has been our guiding principle from the start and it’s really crystallised into the mantra for this new campaign. The band know themselves better than anyone else, and have an innate sense of what’s right for Steps. We trust and listen to them, while bringing in the experience we’ve had over the last decade launching and working with other new and established pop acts including Jessie Ware, The Saturdays, Goldfrapp and All Saints to make the right decisions. We respect and honor the band’s history while ushering in a new era which can sometimes be quite a different version of the music business they started in.”

How difficult a proposition is launching a Steps album without them being able to tour it straight away?

“While it would have been nice to tour this record sooner, it’s great that fans have something to look forward to in 2021 and will get to know the new record so well beforehand. The band’s favourite place is on stage playing to their fans and we are gearing up to their best tour yet which will be worth the wait. Working with Steve Homer, Federica Tombini and Sarah Warburton at AEG on the launch and marketing for the tour has been a great experience as always. They bring so much to the campaign as a whole and know exactly how to harness the excitement of the band’s new music across to their touring business.”

Finally, what is the global picture like for Steps? Where else are they big apart from the UK?

“The band have always been big in Australia, Southeast Asia and in Belgium which will be our key focus territories this time around. Releasing the last album independently meant we didn’t have the scope for a big international push, although the album did hit the iTunes Top 20 in 15 countries. We have plans to tour Australia at some point in this campaign and also hope to return to Belgium where they headlined a pop stadium show on the last campaign. BMG’s international team have been super-engaged, and we have a slew of major TV, radio and press confirmed in Australia for release week already.”