Shout-out to my execs 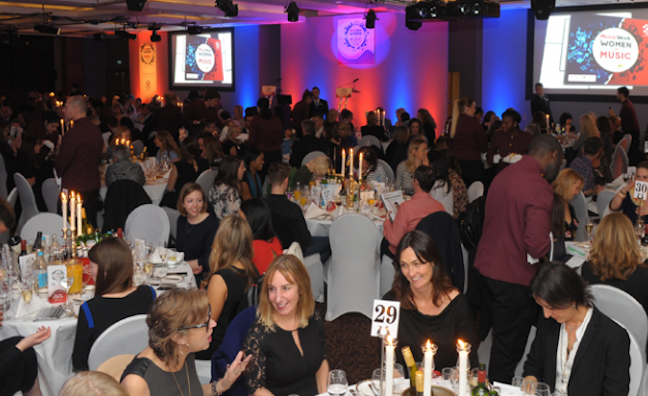 There might have been no Music Week Women In Music Awards ceremony this year, but there has never been a better time to celebrate the brilliant work of female executives across the industry.

As well as presenting the second part of our expanded 2020 Roll Of Honour (check out the 24 inductees here), we invited readers to submit shout-outs for a host of others who deserve recognition for their achievements and efforts over the past 12 immensely challenging months…

“Sony/ATV congratulates Alison Hook for her unparalleled achievements in sampling and fighting copyright infringement. Her efforts to create a more fair and efficient sampling business have single-handedly reshaped the music publishing industry and helped countless songwriters receive fair pay for their work.”

“Since her appointment in 2019, Andrea C Martin has led PRS For Music through record financial results, the first governance changes in 20 years and many challenges brought on by a global pandemic. Andrea is an exceptional business leader who will continue to drive PRS’ development as one of the world’s leading rights management organisations.”

“There is a distinct lack of women in senior A&R and Annie is a role model and proven lifer in this field. I can’t believe she’s not had this recognition before.”

“Beverley’s tireless work for the MVT has saved an entire sector of the music industry. Without her, hundreds of Grassroot Music Venues would already be closed and the funding for the sector from DCMS would not exist, causing the foundations of live music in the UK to collapse.”

“Shouting out Carla Marie Williams! Amazing Grammy-nominated songwriter, champion for all women in music with her mission to unite females through her founded movement Girls I Rate, in support and with the creation of opportunities for women in music, as well as now being an official ambassador for Keychange. Unstoppable!”

“Danielle is a determined and graceful artist manager and was a key figure in catapulting Jack Savoretti to No.1 on the UK album charts in 2019. As an entrepreneur, she is an inspiration to all women – she has proven you can overcome any obstacle and succeed in the music industry with passion and persistence!”

“A multi-award-winning festival celebrating the heritage of Americana with a 360° approach. Leads the charge across Europe and forerunner in the global Americana scene. Its female-led production supports PRSF’s Keychange initiative and has achieved a 50:50 artist gender programme since its 2018 debut. Developed a year-round educational programme for SuperJam helping some of the UK’s most vulnerable young people.”

“Dominique Frazer is the founder of award-winning music venue The Boileroom, established 2006. Frazer is a champion of live music and an advocate for encouraging and supporting young women getting into the live music sector. The venue is a female-led organisation, with an all-female management team, bar staff and engineers.”

“Ella has emerged as a prominent UK agent, representing renowned acts such as Lizzo, Keane, LP and others.”

“The Earth Orchestra is an orchestral project that brings all the countries in the world together, featuring at least one musician from all 197 nations. Emma Newman and Jude Dexter-Smith had the tenacity to create and complete this project.”

“Francesca is a truly forward-thinking, modern international marketing director. Her passion and tenacity have delivered huge success for her artists around the world. This year saw the release of Lauv’s debut album and he has established himself as a global star with engaged audiences in multiple markets globally.”

“Hannah is responsible for Deezer’s PR in the UK and is a well known name among music industry and tech journalists. She has helped Deezer punch well above its weight in the media and managed a number of successful media campaigns in collaboration with organisations like National Album Day and the BPI.”

“Congrats to Jan on a cracking year in the face of adversity! From commissioning a brilliant virtual celebration of what would’ve been Glastonbury’s 50th anniversary to returning the Proms from the Royal Albert Hall to our TV screens, Jan is already plotting and planning many more music TV treats for the future.”

“Jessica had an outstanding year developing Ivor Novello Rising Star Award winner Mysie, along with Punctual, now signed with Polydor, who are enjoying their breakthrough record with I Don’t Wanna Know. Jess has combined this with a new managerial relationship with producer Flood (U2, Depeche Mode, The Killers) and work with Interpol, Belle And Sebastian and Delilah Montagu.”

“Jo Smith has fought for the protection, administration and licensing of rights on behalf of publishers and songwriters throughout her career. Recently re-elected to the PRS Members’ Council alongside her work at Warner Chappell, Jo continues to utilise her experience for the good of music creators across the UK and globally.”

“For keeping the Key Production ship steady and everyone motivated during lockdown and indeed the past 30 years!”

“She’s indispensable, the silent rock behind our transitions from Avant Garde Music to Since ’93 and recently Since ’93 Records, working tirelessly behind the scenes and never seeking any credit. Karen was instrumental in the great year Krept & Konan had from headlining The O2 in November to a BAFTA Award nomination for The Rap Game.”

“Katy joined SJM in 2003. For 13 years, she led and grew the marketing department as SJM expanded. In 2016 she became general manager of the company. Since then she has had a huge impact on the running of SJM and has been vital in helping us deal with the Covid crisis.”

“As well as her role as a legal exec, she’s a DJ, writer and all-round powerhouse. She’s been so instrumental in doing the work to make the music industry more accessible, including visiting schools and giving help. Where a lot of people in this industry are talkers, Laura is a doer.”

“Martha has spearheaded the development of YMU’s own internal mental health support network for our clients and our team. A first for any management company and hugely valuable and important in our industry, especially during these challenging times.”

“Nat has – and does – work tirelessly to support emerging talent and grassroots music. She is diligent, smart, endlessly passionate and hugely important to the indie music scene.”

“Paulette has worked in the music industry for over three decades, currently holding a number of board level directorships. She has made a huge contribution to the sustained growth of the industry and through her passion for mentoring, consultancy and diversity, she educates and encourages the pioneers of tomorrow.”

“Sandra is a legend, over 30 years in the industry promoting artists from the UK and beyond, her passion and enthusiasm is still as strong ever. She lights up a room and a project with her infectious positive energy and upbeat determination.”

“Vicky is continually bossing it this year. Achieving a platinum Top 10 with Ella Henderson, taking on Grammy-award winning artist Foxes to the VDM roster, Nina Nesbitt surpassing half a billion streams and launching a brand new record label, Truth Records. All whilst raising a one-year-old – a true legend.”