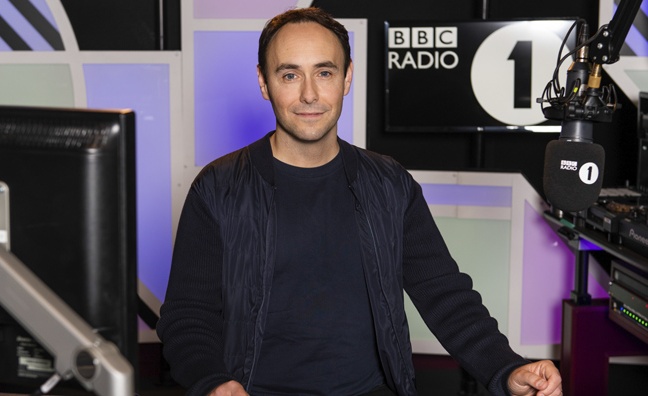 BBC Radio 1 head of station Aled Haydn Jones has told Music Week about the huge opportunity for the station’s new line-up this autumn.

The youth network is launching its new schedule on Monday, September 6, when many listeners will be returning to schools and colleges.

The drivetime show (Monday to Thursday, 3.30-6pm) will be helmed by Vick Hope and Jordan North, following the departure of Nick Grimshaw after 14 years.

“September is probably the biggest opportunity that we have to capture the majority of people who are returning to their routines, whether that’s commuting and travelling in the car, or going to colleges, schools and workplaces,” said Haydn Jones. “Radio is a habitual medium and we’ve had our routines disrupted over the last year, so September is key.”

Covid has halted RAJAR ratings during Haydn Jones’ first year in charge at Radio 1. But he is confident about the new schedule.

“It’s amazing to be able to pull together what will be the strongest month in Radio 1 history – I defy anyone to find me wrong!” he said. “To have Rickie, Melvin & Charlie taking up the Live Lounge and Clara Amfo taking over Future Sounds is a very strong look.”

The new shows coincide with the Music Week Awards on September 14, at which Radio 1 has multiple nominations including Radio Show (Clara Amfo, Danny Howard, Annie Mac) and Station Of The Year, where it faces holders BBC 6 Music.

“The Music Week Awards [shortlist] was amazing,” said Haydn Jones. “It’s great to be nominated for the ‘6 Music Award’ again, which is also known as best station! And to have three shows as specialists in the nominees, that’s incredible.”

Haydn Jones has already shaken up the schedule by moving Future Sounds forward by an hour to 6pm, which opens up new releases to a wider daytime audience.

“What I’m doing is increasing the noise we want to create globally and the creative projects we want to do, which will be a step up for the remit of that show,” said Haydn Jones. “It’s classed as a specialist show, but we challenged that last September when we brought it forward to 6pm.

“But what we haven’t done is include any daytime sensibility to it. This is about a merging of [daytime and specialist] in what, hopefully, will create a stronger, bigger show.”

Clara brings an experience of broadcasting to a mass audience with specialist music knowledge, and a total love for music

Haydn Jones said there has been a positive reaction from the music industry to Amfo hosting Future Sounds.

“It’s going to be the new music show for the entire music industry, it’s for new and returning artists,” he told Music Week. “If it’s big musically, it will be happening on that show.

“Clara brings an experience of broadcasting to a mass audience with specialist music knowledge, and a total love for music. It means we’ll be able to get scale out of that show, which is very exciting.”

“If Jay-Z came to us and said, ‘I want to have five songs, I want to do something creative that is unique to the BBC that sits in my promo cycle as an event’, then now we’re creating the creative space with Clara, who is a trusted name with artists,” said Haydn Jones. “We’ve tested it with Big Weekend, our teams have been rejigged and resources moved around so that we can centralise more of our projects and be a better partner to the music industry, who may want to showcase a UK artist or even an international artist.”

Hottest Record In The World will now be extended beyond its Future Sounds home.

Future Artists with Jack Saunders moves forward in the schedule (8-10pm, Monday to Wednesday). Haydn Jones suggested that listeners are receptive to a wider range of music in the streaming era.

“That’s down to personalisation,” he said. “In the last year, we’ve focused on the Radio 1 brand, reflecting how audiences consume music and entertainment.

“We’ve brought Future Artists into a primetime slot. It’s a spotlight on brand new artists and, interestingly, out of all the changes it’s the one that most people have spoken to me about from the industry. It means that we’ll be able to supercharge and speed up that progression of new artists through Radio 1.”

The Live Lounge is also set for a new approach under its trio of presenters.

“What Rickie, Melvin and Charlie bring is more fun, conversation and elements that will be surprising,” said Haydn Jones. “It fills me with excitement – and a slight nervousness!”

Presenters came off air in the fortnight prior to launch to pilot their new shows.

“It’s a new chapter, which is wonderful,” said Haydn Jones. “And it’s been a phenomenal 12 months, so I’m extremely proud.”

Subscribers can click here to read our digital cover feature with Clara Amfo, who hosts this month's Music Week Awards.