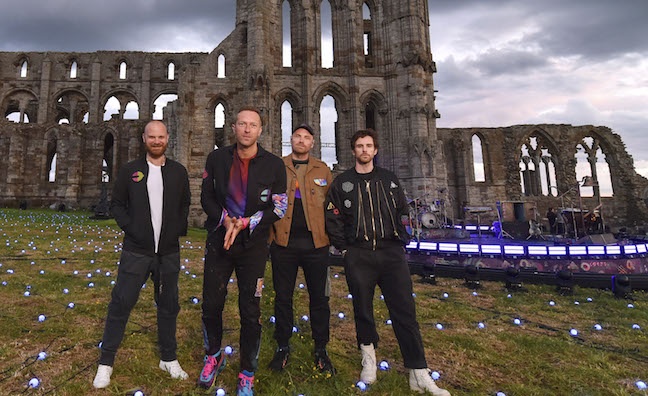 BBC One and Radio 1 are set to broadcast a spectacular performance from Coldplay as part of the Big Weekend.

The band have recorded a performance at Whitby Abbey for Radio 1’s Big Weekend (May 28-31). Coldplay’s set will air on Radio 1 (1pm, Sunday, May 29), as well as featuring as part of a BBC One 90-minute special hosted by Greg James (10.20pm, Sunday, May 29). It is already available on BBC Sounds and BBC iPlayer.

“I did the gig with Coldplay last week at Whitby Abbey,” Radio 1 Breakfast Show host Greg James told Music Week. “They were up for it and genuinely grateful for a platform like Radio 1.”

James filmed an interview with the band and described the performance as “basically a gig for one”.

“I got to just stand there and watch it and be at this beautiful abbey, with a few passers by who clocked on that it was happening,” he said. “When people heard Fix You floating over the town of Whitby, they realised, ‘Oh yeah, it might be Coldplay up there’.

“The whole Coldplay circus turned up with all the lights, fireworks, catering and all the rest of it. You get to see the magic in action. You can't not be impressed by it, and I've been a fan of them since I was a kid. So to see them still wanting to be the biggest band in the world, releasing big pop songs and to chart well, that is something to be admired.”

Coldplay’s Higher Power charted at No.12, following their BRITs performance.

Greg James, who triumphed at the ARIAs this week, said that radio remains vital as a platform for artists.

“Streaming is obviously brilliant at reaching lots and lots of people with your songs,” he said. “But there is always something extra special about a presenter that you trust saying, ‘How about this song in this context or at this moment in the day?’. Or you do an interview with someone and you play another song, you can't get that with a streamer.

“I think both things coexist. I’m not sort person that bashes streaming services, because it's all really important. But I think radio can be such a big step in making someone become a real fan of something. We did an Unpopular Opinion [Breakfast Show feature] with Coldplay recently, and 25 years into them being a band people were texting and going, ‘I had no idea that Chris Martin was funny’.”

Radio 1’s Big Weekend of Live Music 2021 will feature 120 live performances, of which 50 will be new sets recorded for the event. The line-up includes AJ Tracey, Jorja Smith, Ed Sheeran and Royal Blood, who have filmed performances around the UK.

“It's just a shame that it's not all in a field, so everyone can go mad together,” said James. “But it just shows how big Radio 1 is for those artists – they want us to celebrate them and be part of the station.”