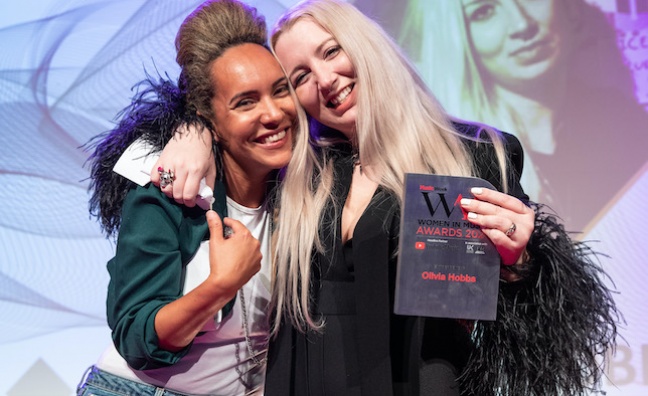 Staged in partnership with AIM and UK Music, with YouTube Music as headline sponsor, the ceremony took place at the London Hilton, Park Lane (October 22). Music Week is running interviews with all the winners following the ceremony.

Olivia Hobbs triumphed at the Women in Music Awards 2021 in the Entrepreneur category.

The Blackstar founder (pictured with Small Green Shoots founder Natalie Wade) was honoured at last month's ceremony following her success with the agency, which has never had outside investment. It has worked with clients including ADA, AWAL, PIAS, Sony Music, Concord, Decca, EMI, Glassnote, Rough Trade, and many more.

Here, Olivia Hobbs reflects on her career so far...

Congratulations on winning this year’s Music Week’s Women in Music Entrepreneur’s award. How do you feel about being recognised in this way?

“So weird, really weird. I was like, ‘What do you mean?’ Because I still feel quite fresh to it, you know? We're only about four years in and I've just been really blessed throughout the whole thing. It's just been a really great surprise to see the people care. It's amazing.”

You worked at record labels for years, so how did the transition to running your own company happen?

“So, I got made redundant. And that's something I think is really important, because it's quite common. And it's nothing to be afraid of. It becomes an opportunity, as much as it can be scary at the time. For me, I just wanted to do some consultancy, you know, meet some new people and it genuinely just grew out of that, and then became this moving machine. I've done this by accident, you know. There was no investor – there still is no investor. This has been built from the ground up.”

There are so many companies doing a form of what you're doing. What’s different about Blackstar, which has made it this huge success and with such a rapid growth?

“I think it's about the people who work here. I think every single person who works in this company is someone I'd go out and have a beer with. And that's kind of been the hiring policy, really. It's like if you're really good, but you're also a really nice person. I think that that's what makes it unique. And I think we're all team-minded and it's not so much about the numbers aspects of some of the things we do, but more the art.”

What has been the biggest challenge in starting and running your own company?

I think that it's important to always review with no ego, so that you can tweak and keep making things better

Blackstar managed to thrive during lockdown, a time when a lot of other businesses struggled. Why do you think that is?

“I think that people just realised that they were relying quite a lot on the digital side of the business that we had, and the social side. And they just needed more support. And people just came quite naturally and reached out and asked for help. And we just kept proving, as we went, that this works. We were building those relationships and I think, to be honest, that growth is just testament to the staff in the company, because they've done such a good job that people are coming back or staying and that's been amazing, and it's given us an opportunity to grow.”

Where did the confidence to run your own business come from?

“Well, both my parents ran their own small businesses, a kitchens and bathrooms business and a balloon decorator. I grew up going to work with them during weekends. I remember sitting and helping my mum go through all of her receipts and greeting customers for my dad. So that kind of sales element came from the experience of being a kid. I also used to just sell everything that wasn't stuck down at school. So I've always been entrepreneurial on lots of different levels. Having an upbringing where you're with parents who are self-employed, and trying to do things differently, can be inspiring.”

How would you say the role of a marketing executive has changed in the past few years?

“I think the way the role has changed is people are going for different types of deal structure now. But they still want to have the option to have a good marketing team, digital team and retain some of that right, which is what we do, but then also we're there to support when a label doesn't have the personnel that they need to do something, or they just want some fresh ideas. It just applies in so many different ways, but that's the kind of gap that’s opened up and made this more viable.”

Since you started in the industry, how have you seen the role of women change?

“I think I was quite blessed to be around a lot of really strong, confident women when I started out in the industry. I've sort of listened and tried to take all the advice that they've ever given. And I think that the thing that I'm starting to see now is that women are now sitting in those leadership positions where they weren't as much before. I think that will help continue to develop our attitude towards being more inclusive.”

What has been your proudest moment since starting Blackstar?

“I think it was when we first took on Rage Against the Machine. I'm just such a big fan. That was like a real ‘Oh my, that's amazing’ moment. Like, I've seen them do so many shows, and listened to the records for ages. It's just madness. And it's just a great team with them as well, so, it couldn't be more of a pleasure.”

And what have been your biggest lessons since starting Blackstar?

“Making mistakes is important. I think I put a lot of pressure on myself to be completely as perfect as possible. But sometimes mistakes lead to bigger lessons that allow you to have growth as long as you put your hands up, whether that be with accounting or something in your day-to-day. I think that it's important to always review with no ego, so that you can tweak and keep making things better.”

What are your hopes for Blackstar in the next five years?

“I want to keep seeing people in our team develop. I want to see people being challenged and having fun with it.  I hope we're all still enjoying it and then everything else that comes along is totally fine with me. But as long as everyone's enjoying it then I'd consider that a success.”

Click here for all the winners and here for this year’s full list of Roll Of Honour inductees.