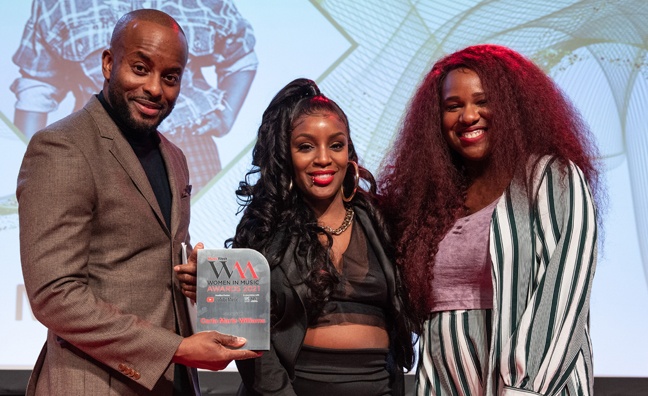 Staged in partnership with AIM and UK Music, with YouTube Music as headline sponsor, the ceremony took place at the London Hilton, Park Lane on Friday, October 22.

One of the standout moments of the ceremony came from the recipient of this year's Campaigner honour, the award-winning songwriter and Girls I Rate founder Carla Marie Williams.

Williams has told Music Week about the inspiration behind the speech.

"Since Blackout Tuesday so many corporate organisations have set up subsidiary companies and charities aimed at supporting women and black people which means it has become increasingly harder for black owned independent organisation like GIR to gain funding & support," Williams said. "We're often told, we are already doing something similar', or 'no budget left', or, 'We can’t facilitate those types of activities'. So again, this further pushes the systemic issues as the money and power stays within the system, decreasing the level of support that can be given to small black owned companies and organisations. Being of Jamaican heritage and with Jamaica and the UK historically having strong ties in music, food, sports, and culture, not to mention the Windrush contributions, I’ve been keen to branch out to Jamaica and the Carribean to push for cultural exchanges. However, since doing so I’m realising how increasingly difficult it is as the Carribean is somehow being overlooked."

Williams went on to details her experiences of trying to get funding.

"I landed an email a few weeks ago about an organisation announcing £3.5 [million in funds] for international projects, and I was so excited," Williams continued. "However, when I looked deeper I found there was nothing in Jamaica – despite being the most long-standing influential island in music, food and sports in the world – or the entire Carribean at all. I pushed for a reason and again was told, 'We do not have the capacity to facilitate projects in this territory'. I could do what’s easy, but I want to do what’s real to me and women like me, so I'm hoping soon they will recognise this and open up these opportunities. We have the young people but we simply don’t have the resources or funds. So we decided to launch #GIRACADEMYFUND GoFundMe in hope of raising some money to support and sustain our projects. Donations will go towards the first safe space studio for women in Jamaica, Mentor Me online Masterclasses, GIR Radio [a platform dedicated to promoting women's music] and core running costs. Please support the #GIRACADEMYFUND."

Here, Music Week Women In Music Awards 2021 Campaigner Carla Marie Williams, founder of Girls I Rate, reflects on her win, her career so far and her hopes for the future...

You’ve just been named Music Week’s Women in Music Award’s Campaigner for 2021, how did you feel when you heard the news?

“I was so ecstatic. I was in Jamaica the week before I heard and I just didn't feel like I had been recognised, especially by some of the establishment involved in the award. I felt like, you know, there would have been other women in particular, white women, that would have got the award. So, I was ecstatic that the work that myself and the girls at Girls I Rate had been doing has been recognised in this way.”

What was the motivation behind Girls I Rate (GIR)?

“Girls I Rate started in 2016, the year before my mum passed away and it came about when I started going to America and being in different rooms. I had already experienced certain challenges in the music industry in the UK, and I quickly realised America was even a bigger place of a lot of red tape and compromise. So basically, I was working with some managers from the States, and I found myself always at loggerheads with them over the things that I wanted to do. I think the last thing that really resonated with me was when one said: ‘Why don't you just shut up and write songs?’ And that's what motivated me to start Girls I Rate and do it with purpose and do it relentlessly.”

What are some of your big wins in terms of GIR so far?

“Our songwriting weekenders were amazing. The first one was at Metropolis, and it was sponsored by MOBOs. And I then ended up doing a UK tour a couple of years later. We went to Liverpool, Dublin, Manchester and Birmingham, where hundreds of girls came out just to hear me talk and work with me.”

Who are some of the organisations you have partnered with?

“A partnership I've had since 2017 includes working with PRS for Music on an initiative called #GetHeard. This is basically where we get A&Rs to come and listen to the girl’s music and give feedback. We also launched the Future Hitmaker competition with the PRS Foundation where we offer our girls bursaries to enter the competition. In addition, we’ve just been awarded financial support from the Spotify Equal Board. And, I also love the partnership we have with Music Week where we highlight amazing women in the industry, black women in particular.”

What is the biggest concern you hear from women when it comes to the music industry?

“A lot of women don't feel like they're taken seriously, that they are undermined, and sometimes it's not just men who are guilty of that - women are also guilty of that in different environments, because we have defence mechanisms to get to the top. I feel like a lot of things we learn as people we need to get rid of, such as the crabs in the barrel mentality. I also know that the Me Too movement is starting to dissect the music industry and we too are getting involved by trying to ensure women feel safe in studios. We are partnering with organisations such as The Cube and Pirate Studios to provide these safe spaces for women."

A lot of women don't feel like they're taken seriously, that they are undermined

Have you received support from music labels with your work with GIR?

“It's really hard and I really wish there was more support. What the labels are doing is they start their own initiatives so that the money stays in house, then they don't have to support anything and it's still the same people at the top in control. That’s the vicious cycle going on with a lot of organisations now, where they start their own initiatives, so they don't have to support, black people and black women in their endeavours. It’s so it all looks good, but really, it’s performative. So, when you approach them for support it’s: ‘Oh we've already got our own one internally so we can't support yours’. That means the same people remain at the top and in power and there's never any ownership that trickles down to women like me.”

As a songwriter you’ve worked with a lot of great artists. Working with Beyoncé must have been surreal, did you get any advice from her?

“Yeah, we just talked about so many different things. I remember her asking me if I would write her a song like Ike and Tina and I was ecstatic, because I always said that I wanted to be a rock and soul girl from young. She must have heard it in my voice, because we were basically freestyling together before that. She was on a mic and I was on a mic and we were going back and forth, just vibing, you know. Yeah, but it wasn't really one of those ‘give you advice’ kind of environments. She was more, ‘I'm just gonna listen to what y’all are doing’, you know. She come in to take from us [team of songwriters]. We were newbies, freshies, and she just wanted some new energy.”

And where do you see your career going in the next five to 10 years?

“I would really like to be able to support women putting out music properly, through GIR Academy and really helping artist development, all the way through to putting out records. I would love to do more work in America with artists over there, and in Jamaica, one of the most influential islands in the world which hasn’t really got the resources or been given the recognition. I've approached a lot of funders, even over here, to help empower and support, even black Jamaicans from the diaspora over here in support. In my career I’ve always felt that I had to write pop music to be successful. I would have loved to have written reggae or dancehall infused music, so to chase those opportunities now would be amazing.”