Women In Music Awards 2022 - The Company Award, Diversity In The Workplace: Come Play With Me 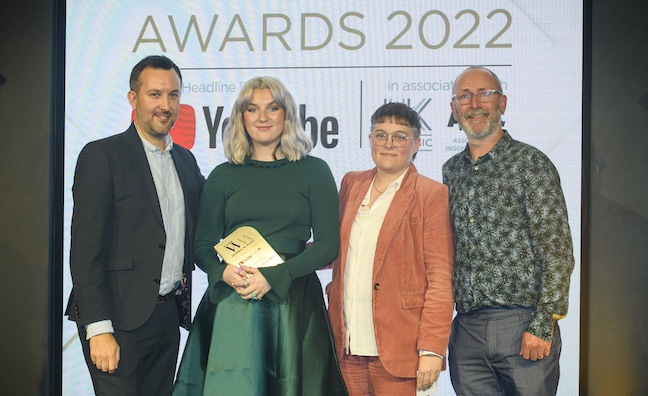 At the Music Week Awards 2022, we celebrated the achievements of 12 game-changing executives and artists as the industry came together to honour their work.

Music Week has spoken to all 12 winners to tell their stories.

This year's winners of the Company Award: Diversity In The Honour category – which is judged by members of the UK Music Diversity Taskforce – is Come Play With Me. A Leeds-based label and non-profit music development organisation, the organisation specialises in supporting people from marginalised communities to build sustainable and meaningful careers in the music industry.

Led by director Tony Ereira, CPWM supports artists with skills, funding and live opportunities when releasing music digitally and physically, alongside regular long-term support for artists in the region delivered via mentoring, artist development and workshops.

Come Play With Me supports early career promoters in delivering and promoting events through its Come Platform Me initiative, while its annual I Know A Place conference provides a space and platform for those experiencing marginalisation within the industry. The company also offers training and consultation on LGBTQ+ and trans inclusion for venues, labels and other industry professionals.

Outside of artist and professional support, Come Play With Me has established a successful podcast dedicated to creating and celebrating LGBTQ+ role models, alongside a bi-monthly physical and digital magazine creating opportunities for writers and editors to develop their skills. All of which allows the company to support young people across Yorkshire with mentoring and shadowing opportunities in all aspects of the music industry, signposted via our extensive partner networks in Leeds and beyond.

Congratulations on winning the Diversity In The Workplace award at this year’s Music Week Women In Music Awards. What does this acknowledgement mean to you?
Eva Davies: “It makes us really proud of everything that we're doing and everything that we've achieved over the past few years, I know we've grown a lot as a team. It's really exciting that we get to share this with everyone.”

Your business is a non-profit record label and development organisation established to support people from marginalised communities gain sustainable music careers. What was the initial inspiration behind your formation?
ED: “It was originally Tony [Ereira], the director, who set it up as a singles club back in 2015. He wanted there to be a platform to support emerging artists and be able to give them the opportunity to release on vinyl as that's often something that's never massively achievable for emerging artists because of the cost. And it just slowly grew from there. Over the past few years, we started focusing more on support for underrepresented groups. And that's now the forefront for 80% of our projects – it's grown as the team has grown.”

Antonia Lines: “What’s been nice about it is that it’s grown really organically. The more we worked with marginalised people – a lot of them were LGBT and working class – the more other people came to us from different areas of the music industry. Now we have the magazine, where we work with a lot of LGBT writers, photographers and designers, but also people who might want to get into working at festivals or putting on gigs, stuff like that. So, now, we don’t just support musicians, a big part of what we do is everything else to do with the music industry as well.”

ED: “It also reflects on a lot of experiences we’ve all had working in music, because we’re a very diverse team too.”

What work in the diversity space are you most proud of? What impact have you made?
AL: “I think it's interesting, because we're a mostly queer, working class background organisation and we have a very unique make-up. But we're also very keen to work collaboratively with other people. So we'll work with Black Lives In Music, Attitude Is Everything and lots of other people that work with other marginalisations and other identities, to bring in other peoples’ experiences and make sure that we're supporting those who also don't look like us, because as much as are diverse in terms of identity, class, background, geography and all that kind of thing, we're not diverse in terms of ethnicity, race – there's a lot of stuff missing from the makeup of our organisation. So we try to, as much as possible, work with other people who are doing that work. We will help people with LGBT inclusion, they may help us with race equity, or making sure that people with different disabilities can come to our shows – that's been really nice, in terms of diversity and inclusion. We're able to offer our expertise, but we're also able to work with people that can offer theirs. And it becomes a very mutually beneficial thing where we're all working together to support that equity in the industry.”

ED: “I think the compilation albums we do are a very good example. We work with 10 to 12 artists on each compilation album and we're now on our fourth. A lot of the time, these are artists that have never released a song before, so this is their first experience of releasing music and being an artist. Giving them the time to develop as artists and feel more confident about the work that they're creating is really exciting. And it's something that I love doing.”

Across your events in the last six months attendees identified as 63% female, 11% non-binary/preferred not to say, 1.5% trans, 37% people of colour, 57% LGBTQ+, 6% had a disability and 56% working class. Likewise, Come Platform Me supports early career promoters that have experienced marginalisation to deliver and promote inclusive events, build experience and gain practical skills in event production. How far does the industry have to go to catch you up in this regard?
ED: “I think the starting place is not forgetting about the importance of not only creating spaces for underrepresented people, but also including straight cis guys [in the conversation]. I think there's a lot to be said about the allyship side of inclusion. Because you need to be able to open up the conversation with everyone. I think the more people that do that, the easier it is to have conversations that are open and honest, where people can feel like they can ask questions.”

We work with 10 to 12 artists on each compilation album... A lot of the time, these are artists that have never released a song before, so this is their first experience of releasing music

AL: “There are so many people doing great work in terms of making the music industry more equitable. So I think it's about larger organisations, or people that have that resource and funding, getting those people in to share their experiences. Training is great, but what is often missing from that is what support people actually need, taking that step back and saying, ‘Okay, we're going to ask different communities what it is that they need, and then we're going to do that.’ That's where we come from. It's about creating a space where people can ask for help. And the first step to that is by asking people what support they need, and then doing it – and doing it in the way that they want.”

What did backing from BPI, Youth Music, Independent Venue Community and others do to help you spread the word?
ED: “Youth Music enabled us to be able to bring more young people on the team. I know that's something that Tony [director] is really keen on – and giving them responsibility so they have a bit of ownership on the work that they're doing. IVC is all about training, they support us loads for I Know A Place, which is our January conference. And that means that we can make it a bigger thing with bigger names and make it a real staple for people to come to.”

AL: “That IVC partnership is really great. Now we’re doing a UK wide venue support thing with them where we go and talk to venues about inclusion and how they can create more physical spaces for LGBTQ+ people that are welcoming across different venues in the UK. And as for the BPI, they supported us to get a label assistant in for a year, which allowed us to really look at the label and ask how we support artists long term. How do we develop artists? How do we help them book a tour? How can we help them for the next 12 months of their career and then maybe pass them on to a different label? So it's given us that kind of capacity, which in turn allows us to go for more funding bids based on the fact that we're able to support artists more long term.”

What would your message to the music industry be?
AL: “There are so many people doing great work at a grassroots, community level in the industry that are so diverse and so brilliant, you just need to listen to them. Just listen to what their experiences are. Listen to what support it is that they need and give it, basically. That makes it sound really simple, and it's not, but it’s just about finding out who's doing things in the area that you work in, whether that's geographically or industry wise, and working with them – giving people the work and the space that they need to be able to do things.”

ED: “I agree. Collaboration is my word!”