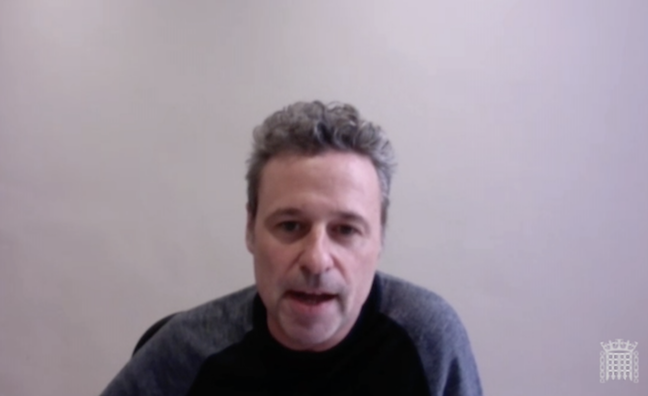 AIM CEO Paul Pacifico summed up the debate around the streaming economy during the latest virtual session of the DCMS Committee’s inquiry. It was the indie labels’ turn to give evidence following sessions with artists, songwriters and major labels.

AIM had already submitted its evidence but this was a chance for Pacifico to expand on his themes.

“Getting those artists and independent businesses to the scale that they can really work is a massive challenge – you have 90% of the revenue from streaming going to 1% of people,” said Paul Pacifico.

Pacifico also noted the unchanged £9.99 price point for subscriptions and the continuing impact of piracy. And he brought up Sony Music’s acquisition of AWAL this week.

During the session, he suggested there was not enough focus on competition concerns and the “big picture” of streaming.

“We are seeing ever greater difficulty,” he said, “and infrastructure, being bought out of the independent ecosystem and isolated into the majors, so I think it's something to watch very, very carefully.”

“There is the £9.99 that's been the same for the last 10 years on the main platforms that we listen to,” said Griffith. “Unless you are in that higher echelon of billions of streams, that's never going to generate your rent for you. So I really do think that there is something that needs to be done in terms of the modern landscape that we're in, and changing how we work so that it's fairer for all. Some people need to sit around the table.”

Unless you are in that higher echelon of billions of streams, that's never going to generate your rent for you

However, there was no great enthusiasm for the user-centric model for royalties, which AIM has warned could benefit older acts at the expense of new artists.

Following the appearance by the majors, MPs learnt about a different approach to business with the indies. Griffith confirmed that Jazz Re:freshed is a non-profit that works on a profit share basis without costs to recoup.

“It's a very, very different model,” she said. “We give a lot because we really want to support that first step in their career.”

Under some tough questioning by chair Julian Knight, Pacifico suggested that indies are different to majors because of the deals and the commitment to share so-called black box revenues that are unattributable. But he conceded that traditional deals may be as prevalent as 50:50 splits.

Rupert Skellett, general counsel, Beggars Group seemed to confound some of the committee by declaring: “We are not commercially driven.”

“Isn’t that a strange thing for a business to say?” responded Labour MP Kevin Brennan.

Asked if Beggars Group was really so different to the majors if it has a traditional deal structure, Skellett used the virtual session to call on the big three to increase royalty rates for artists.

“I think our royalties are higher than the majors on a traditional deal, in my experience,” he said. “After a certain period of time, we wipe unrecouped balances for our artists, and we actually have a minimum digital royalty rate for our artists.”

Skellett said that old deals with a low rate had been revised “across the board” to reflect the streaming age.

“Our chairman and owner Martin Mills has tried to persuade the majors over a number of years to adopt at least a minimum royalty rate for streaming,” he said. “Because it's unconscionable that some artists on legacy contracts are getting a less than 10% royalty rate from digital. It’s just a nonsense. So we would urge the majors to adopt Beggars’ company policy of having a minimum digital royalty rate and wiping the unrecouped balances over a period of time.”

Skellett said the “benchmark” royalty rate should be 25% for streams.

Asked what effect that would have on those artists, Skellett said: “In some cases, it would double their royalties from streaming. It would mean that some older artists on legacy contracts would have a direct benefit from the streaming economy."

In the context of that streaming royalty rate, MPs did ask about the level of A&R investment that majors put into artists.

Of the three indie representatives at the session, Skellett came closest to supporting a user-centric system as “philosophically fairer”.

The Beggars veteran also defended the life of copyright deals for  labels and suggested that any law allowing rights to revert to artists  would be “pretty disastrous for us”.

“We definitely see it as partnership,” he added.

And just in case anyone was in any doubt, Skellett told MPs that Beggars would never be sold to a major or anyone else.

The inquiry continues next week with evidence from three major streaming platforms.