'It's fantastic to see the album in the Top 10': Inside the Joy Division campaign 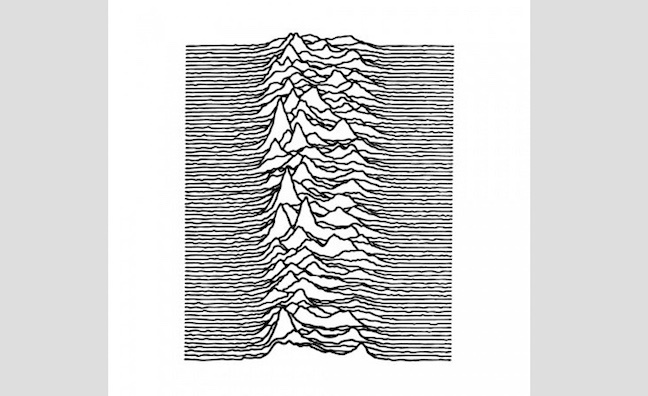 Joy Division’s debut album Unknown Pleasures is now acknowledged as a post-punk classic. But at the time it was just a staging post in the band’s short-lived career with tragic frontman Ian Curtis.

The surviving members went on to become New Order, of course, and still regularly perform Joy Division songs. Now they’ve also got a Top 5 album with Unknown Pleasures, as Rhino’s 40th anniversary vinyl reissue has secured a chart entry at No.5 (8,531 sales). The record’s previous best was No.71, and it’s now surpassed Joy Division’s chart peak for a studio album with the valedictory release, Closer, in 1980 (No.6).

The 40th anniversary edition of Unknown Pleasures has been a Top 10 chart success for a vinyl release - how did you achieve such strong sales?

“In the case of this album, it was always going to be about telling a story and celebrating the record’s enduring legacy through multiple mediums. Investing in quality creative assets that reflected the Joy Division brand was key. This was rolled out via a combination of online advertising, new content, a unique YouTube strategy, merchandising and local initiatives such as a t-shirt giveaway and projections on buildings. It’s fantastic to see the album in the Top 10 for the first time ever, getting the chart recognition it deserves and matching up to the level of critical acclaim it has always had.”

Has the product itself been a big part of the appeal in terms of a collectors' item?

“Yes, certainly the way we were able to repackage the album and make it feel part of the story was crucial. Taking one of the most iconic sleeves in music history and changing it was always going to be dangerous, but working with Peter Saville and the band we took the artwork back to its roots when it was first spotted by Bernard Sumner; creating something that was as equally striking as the original. Coupling that with the ruby red vinyl to symbolise the 40th anniversary, we came up with something wonderfully celebratory and instantly collectable.”

Has the media support for the reissue helped the campaign?

“Yes, absolutely. Their support has been crucial in celebrating the legacy of the record and introducing it to a new audience. Getting the extensive coverage we did was fantastic, and the team worked hard to make sure press, radio and online were all engaged right from the start. From 6 Music playing the album in full, The Guardian running an in-depth piece online, to GQ interviewing Bernard, Stephen [Morris, drummer] and Peter Saville, you could really feel the impact of the moment across the media.”

What's the social media and streaming strategy to complement the physical release?

“Despite all the focus on the vinyl, our mission was also to drive increased streams of the album and band. We combined a relatively straightforward advertising campaigning across Facebook, Twitter, Instagram and YouTube with strong and engaging creative pre-rolls, alongside a roll-out of brand new content that included interviews from the original members discussing the album. In turn, we received great support from our streaming partners, providing key homepage profile for the album during the week and on the anniversary itself.”

"Amazing that 40 years after release, new generations are still discovering and listening to our debut album. The timeless sound of Unknown Pleasures continues to live on in a way we never expected" - Bernard Sumner.

How supportive have the band been for the campaign?

“The band have always been very supportive of our activity, and it of course helps the campaign get to the next level of success. Giving up time for content and interviews as well attending playbacks and events is a massive boost, as the fans want to hear it from them. Having Stephen’s autobiography and Jon Savage’s Joy Division book coming around the same time absolutely helps the album get renewed focus.”

The band are actively touring and playing Joy Division songs - does that help this campaign?

“New Order are still very active, playing fantastic venues and festivals globally, and it does help to keep their brand strong. As their catalogue label, we work very well with the band to maximise their music and they have just gone from strength to strength over the last few years, cementing their position as one of the UK’s most important acts. Peter Hook has also been selling out venues such as the Royal Albert Hall with his Joy Division tribute and Hacienda Classical, which certainly adds to the moment. I think our challenge is always to take their music further than the already converted and grow their fanbase.”

How has Rhino worked alongside brand and creative partners on this campaign?

“One of the successes of this campaign was that it did work on many different levels, not just from the marketing and media coverage, but also the creative collaborations that came out of working with a brand that everyone respects. The band and Unknown Pleasures album has always represented great music and visuals, allowing us greater collaborative opportunities. The Goodhood [clothing and homeware] collection is great example of how Peter’s design still resonates and the team were able to do something new around the 40th. On the YouTube front, one of the marketing strategies for the album was to produce promo videos for each track with 10 global directors. The tracks never had videos and allowing people no brief has been a really interesting experiment.”

What are the future plans for Joy Division and New Order reissues?

“This year we started a long-term New Order reissue plan with the Definitive Edition of their debut Movement in April. It’s a beautifully designed package by Peter Saville, that offers the fans a hefty coffee table-style book, original album on vinyl as well as a wealth of unheard music and unseen video. Power Corruption & Lies is due towards the end of the year, with Low-Life to follow in 2020. We continue to have a fantastic relationship with the band, and over the next couple of years we aim to do their incredible catalogue justice with best in class reissue campaigns.”