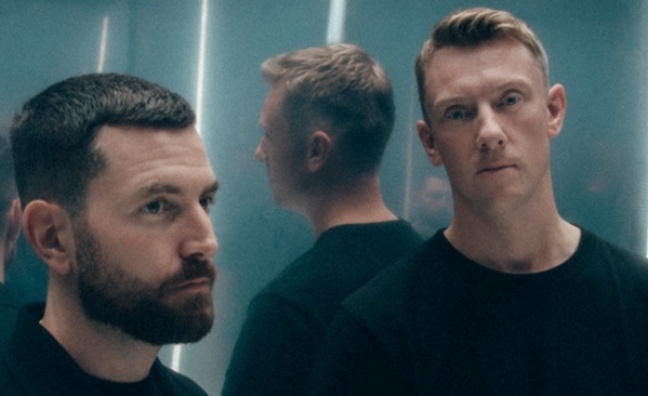 The clubs might be closed but that has not deterred electronic music duo Bicep from flexing their musical muscles.

Belfast pair Andrew Ferguson and Matthew McBriar made a host of friends with their 2017 self-titled, Ninja Tune-released debut album, having previously influenced the cutting edge of electronic music with a series of limited edition pressings on their own label and via thier Feel My Bicep blog, which helped named their project.

As they return today (January 22) with second long player Isles, Tess Kendall, senior product manager at Ninja Tune, talks Music Week through how to release an album by a floor-filling act like Bicep when the dancefloors are off limits...

After the success of Bicep's self-titled debut, what are your expectations for Isles?
"On Bicep, our aim was to build them into an album selling artist beyond their club orientated fanbase. They had an incredible 10-year DJ career behind them and sold well on 12-inch at indie stores, with a solid audience on DSPs, and on the debut we grew that audience to a global and more diverse fanbase selling over 100,000 copies worldwide. Their Glue single remains a tour de force, nearing 100 million streams to date. Bicep also coincided with the launch of their Biceplive show and toured globally for 18 months to 26 different countries. So, we had a fantastic foundation for Isles, and we’ve worked hard to build on this upward trajectory. With a second album, there is always concern that without the excitement of a debut, it could be a struggle to engage press, industry and fans. But with Isles, we knew that Matt and Andy had pushed themselves to deliver another stellar body of work."

Has the lack of nightclub activity impinged on how you have released and marketed the tracks, particularly within the dance community?
"Bicep had already scheduled various festivals and a full album tour, which of course has had to be postponed. They were scheduled to play two O2 Academy Brixton shows in March - their largest to date, which sold out 10,000 tickets within minutes, and had another 10,000 on the waiting list. The sense of community runs deep for Matt and Andy - they found solace and unity on the dancefloor at Shine in Belfast growing up. The vast majority of their fans also connect over their music in a club or live setting, so it has been hugely important to us to find ways to keep that connection with the dance community."

What sort of things have you been doing?
"We invited fans to join a private WhatsApp group via a QR code where we sent out information, audio and video clips or behind the scenes content. The Instagram filter and outdoor activation have been great for promoting fan engagement, as fans across the world have a chance of seeing themselves projected onto buildings. Matt and Andy have really missed touring, and found unexpected pleasure in doing their first livestream, which saw fans from over 70 countries across five different timezones set up makeshift sound systems. Bicep were one of the first electronic acts to do a ticketed livestream, so were in uncharted territory as fans are so used to enjoying sets from their favourite artists on the likes of Boiler Room for free. They worked hard to find a concept and the reaction from the fanbase was incredible - they had the most amount of engagement they’ve ever had on social media, and we’re looking forward to their Global Livestream II on February 26."

How important has D2C been in this campaign?
"Bicep have a huge and engaged fanbase, they appreciate buying directly from the artist so we have seen great pre-orders via the Bicep store. We have been able to set up bundles with merch, tickets and also a competition to win a piece of equipment used on the album, all these run through D2C and have been really popular. We also utilised Bandcamp and its community. It is a really good outlet for Bicep. We are in a strong position at Ninja Tune whereby we have a webshop (the Ninjashop) and are able to drive a lot of sales and traffic through that, as well as offering bundle options. Against a backdrop of Covid, having not only our own shop, but platforms such as Bandcamp with already existing fan and customer bases means we are able to operate without too much disruption and ensure that the record is readily accessible."

Bicep wrote Isles with touring in mind, the album is the home listening version

Whereabouts do Bicep sit at DSPs, as the market increasingly moves towards streaming?
"Streaming is at the forefront of the campaign and we've ensured that fans are constantly driven to DSPs via digital marketing, social media and partnerships with each platform. Glue took off on TikTok following the lockdown as users began sharing their favourite nostalgic clubbing memories. This put Bicep back in the limelight at the exact right moment, and allowed us to partner with TikTok. Apricots was also included in a TikTok challenge. Bicep have been keen to embrace new methods of reaching their fans digitally. For instance, they decided to pick up their curatorial skills they developed on their FMB blog with their new monthly Feel My Bicep Radio show on Apple Music 1 after their tour was interrupted by the lockdown.They also regularly update their own Feel My Bicep playlist on Spotify and other DSPs.

Is radio shaping up nicely for the record?
"Both BBC 6 Music and Radio 1 specialist shows have been incredibly supportive in the past. Atlas went on the C-list at Radio 1, which was a first for Bicep. Apricots has been a runaway success on radio across the board, it's been on the Radio 1 B-list for nine weeks as well as the 6 Music A-list. We’ve also seen a tonne of support on Kiss FM including daytime, as well as spins on BBC Radio 2 and regional shows. They’ll be hosting a show on NTS in the coming months too."

How important will indie retail be?
"Hugely. We have been working closely with stores to be able to deliver a campaign that can work well for them and their customers in the current climate. A good portion of indies have a web store or the ability to purchase online, so we have ensured that where possible we are pointing fans to those web shops alongside our D2C options. We also shifted to digital marketing rather than in-store marketing with all indie stores ensuring that the album is visible to each stores audience. In place of in-person in-stores we have worked on digital options such as a livestreamed Q&A with Rough Trade. We are planning ‘outstore’ performances in Kingston, Leeds and Brighton for later in the year when hopefully crowds can gather again."

With the possibility of live events in the year, do you expect the Isles campaign to run for longer than usual?
"Bicep toured their debut for 18 months. Given the delay in getting back on the road we do expect to extend the length of the Isles campaign further. Matt and Andy wrote Isles with touring in mind, the album is the home listening version, they had always intended re-work the tracks for their live show. We plan to release those versions at some point in the future once fans have had the chance to enjoy them in a live setting. We’re hopeful that they will play their first headline slot at London’s Field Day festival this summer."