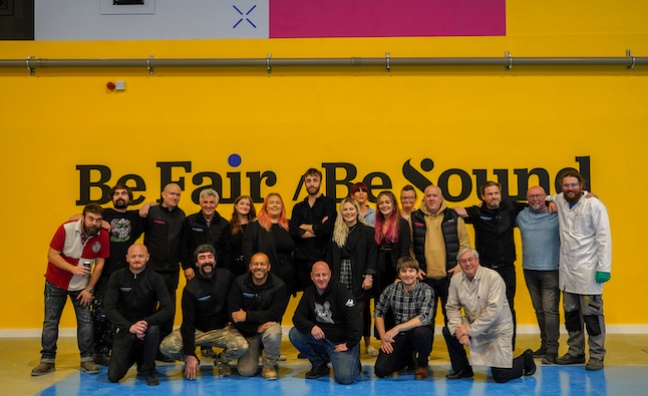 An e-commerce platform linked to the plant itself, FairSound will allow users to design and sell their records as pre-orders before going into production and being shipped directly to fans and shops.

Users will first create their record on the platform and set up a pre-order campaign. As pre-orders come in the record will edge closer to what is known as the ‘Press On Point’, when the user will decide on the final quantities of their record to manufacture and ship to fans.

Press On Vinyl’s FairSound platform is designed to be simple, and transparent, and is targeted at users ranging from artists running DIY campaigns to labels looking to gauge interest with niche releases.

It coincides with the launch of elasticStage, an on-demand D2C vinyl service for artists and labels.

FairSound will launch first with a beta test featuring a select group of artists, labels and releases allowing them to properly monitor the platform, production lead times and customer experience. The FairSound team hopes to launch it fully in early 2023.

Using FairSound during this test period are emerging artists including Ukrainian ’60s-inspired psych trio Love’N’Joy. Others using the platform are South London producer & composer Max Cyrus with his new MCM Label; Sunderland indie-pop band Vanderbilt, who will be pressing their debut album; and Middlesbrough indie legends Dartz, who will mark the 20th anniversary of their debut album with its first ever vinyl pressing.

Another of the beta test releases is a vinyl compilation from iconic Leeds indie label Dance To The Radio released on bio-compound vinyl.

FairSound’s partner organisation Press On Vinyl is a new UK pressing plant in Teesside with a focus on serving independent artists & labels. Since launching earlier this year, Press On vinyl expect to raise capacity to around 100,000 records a month by the end of 2022.

Press On vinyl has also been working with EvolutionMusic to produce what is billed as the world's first commercially available bioplastic vinyl.

Artists & labels who are interested in taking part in the FairSound beta test or finding out more should contact info@fairsound.com or follow socials for further updates.

FairSound co-founder Danny Lowe said: “We are incredibly proud to be part of the UK music industry and with a passion for all things independent, we understand the issues facing artists and labels when it comes to physical releases. We believe Fairsound will be a platform where more of this wonderful music can be realised in this format. It’s a force for creativity!”