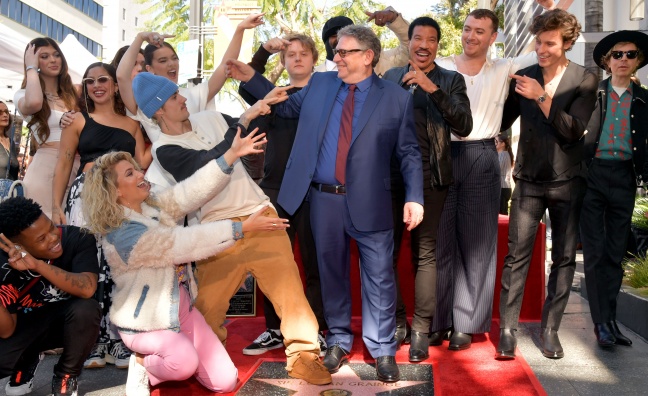 Grainge is one of the few modern British music execs to receive the accolade of a star on Hollywood Boulevard – and plenty of his labels’ own stars turned out to acclaim him.

As well as Mendes and Richie, the likes of Lewis Capaldi – hoping for a British Grammy win this weekend – Justin Bieber, Sam Smith, Gregory Porter, Beck, Tori Kelly, Hailee Steinfeld and Scooter Braun all turned up for the ceremony at 1750 North Vine Street, near Universal’s own Capitol Tower building. They heard Sir Lucian pay tribute to “the best team the music business has ever seen”.

“Sir Lucian Grainge is quite a force in the music industry,” said Ana Martinez, producer of the Hollywood Walk of Fame. “He has his finger on the pulse of many genres of music from around the world and we are proud to honour him for his work in music.”

It’s the latest accolade for Sir Lucian – who won the Music Week Strat Award, the highest honour in the UK music biz, in 2010 and was knighted in 2016. Universal had another stellar year last year under his leadership.

His full speech is below:

“Firstly I’d like to thank everyone at the Hollywood Chamber of Commerce that made this possible. It is a great honour.

“I Googled this morning how far it is, as the crow flies, from the suburb of Finchley where I grew up to Vine Street here in Hollywood. It says it is 5,471 miles. If you told me when I was growing up in that small house in Parkside that, one day, I’d find myself here, looking out at all of you, I would have said you were nuts.

“But looking back I see how my boyhood passion for music, which I inherited, set me on my path. For as long as I can remember, I just loved music and, starting at the age of 17 in the music business, it’s been my life’s work.

“Today at Universal, I am still surrounded by music, and the best team the music business has ever seen. I wouldn’t be here today were it not for them, constantly making me look good. All of us are so fortunate to do what we love. Together.

“I’m thrilled that this star lies at the foot of the Capitol Tower. It’s a tribute to the company’s commitment to our artists, and the entrepreneurs and their music, and who could ask for better neighbours than me, look at the stars nearby… Bonnie Raitt, Roy Orbison and The Beatles. Of course, my journey would not have been possible without all of the amazing artists, who’ve given me the privilege and the opportunity of working with them and helping them to bring their music to fans all around the world. Lionel, Shawn, wherever you are, thank you for introducing me.

“It’s meant the world to me, for your generosity and most of all for both of your friendship.

“Finally my family, Caroline, Betsy, Elliot and Alice, I owe my deepest thanks to you. Nobody makes it in life alone and I owe you so much.

"One last thought, this star, an honour I never expected to receive, is a reflection of this extraordinary country. Of the unique opportunity that America offers and to anyone who is willing to aim high, work hard and pursue their dreams and, of course, have many global hits. So many of the stars on this Walk Of Fame belong to people like me, who came from someplace else, and I am both humbled and grateful to be joining the ranks of such illustrious company. Thank you very much indeed.”