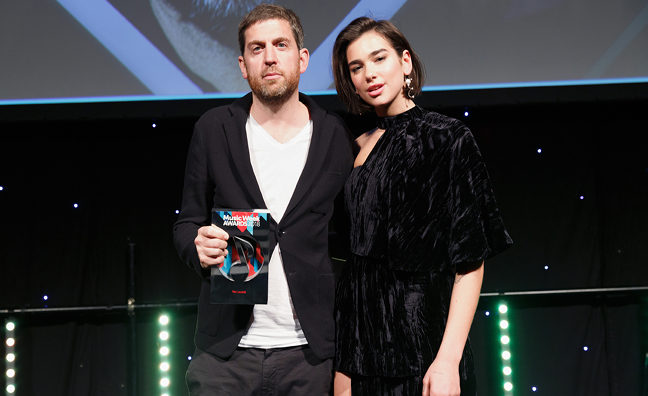 The Music Week Awards recognises a vast array of industry talent across 23 categories voted on by experts. But the big night always builds up to the Music Week team's special award for an outstanding contribution to the music business – The Strat.

Last year, Warner Music's CEO of recorded music Max Lousada (pictured above with Dua Lipa on the night) took home the coveted trophy, while in 2017, First Access Entertainment CEO Sarah Stennett was honoured with The Strat and she gave a rousing speech with a call to support the next generation of talent.

The award was named after Tony Stratton-Smith (nicknamed ‘Strat’), a former journalist who became a larger-than-life industry character as a manager (The Nice, The Bonzo Dog Doo-Dah Band, Van Der Graaf Generator) and the founder of Charisma Records (Genesis, Peter Gabriel, Julian Lennon, Lindisfarne), ‘Strat’ died in 1987, aged just 53, of pancreatic cancer. His huge popularity throughout the industry, however, meant that later that year, Music Week’s most prestigious award was named in his honour.

The Music Week Awards 2019 takes place tonight (May 9) and, as we await the announcement of this year’s icon and innovator later tonight, here Music Week revisits our history of The Strat with the former winners…

Max Lousada, CEO, recorded music, Warner Music, 2018
"Fifteen years ago, when I started at Atlantic, I was lucky enough to spend time with Ahmet Ertegun – a great friend and drinking buddy of Tony Stratton-Smith who inspired this award. And, when I was preparing this speech, I came across a line of Ahmet’s I think Tony would’ve liked. He said, “It’s a great life, this life of music. I never imagined I could earn a living doing something I enjoyed so much.”

"And that’s exactly how I feel. All I ever wanted was to be in music. As a kid, sharing the latest LP or mixtape, I saw the power it had to bring people together and I was sold.

Sarah Stennett, CEO, First Access Entertainment, 2017
“Let’s support the young people we work with, let’s allow them to express themselves, let’s help guide them through their mistakes. To the young people in this room who feel they can’t always express themselves in a room full of experienced executives or who aren’t always heard, to those navigating the unchartered waters of a rapidly changing industry, I encourage you to be brave, embrace your individuality and in the words of my father, hang on in there.

“I would like to dedicate this award to Jill Sinclair, my old friend Joanne McCormack and to all the other women who have not been recognised since 1989.”

Neil Warnock, The Agency Group (now United Talent Agency), 2015
“My first reaction was total surprise at being offered The Strat, and then immediately remembering the man it’s named after – Tony Stratton-Smith, a larger-than-life character who brought us great music via his Charisma label (Genesis etc) and great drinks at the Marquee Club bar!

"The evening itself was special, surrounded as I was by family, friends and business colleagues and then there was the very memorable Music Week feature which was enormous, and very humbling all at the same time. I’ve been lucky enough to receive a few awards and this was the best!”

Paul McGuinness, Principle Management (2004)
“I was honoured to receive The Strat award a few years ago. I remember the Music Week Awards as a great occasion. Sadly, I didn’t know Tony Stratton-Smith myself, but I believe he was very amusing.”

Daniel Miller, Mute Records, 2006
“I was flattered to receive the award, particularly in the context of previous recipients. I was very nervous on the night, as I’m not a practiced speech-maker, there were so many people I wanted to thank and I didn’t want to forget anyone.

“Fortunately, I was well supported by colleagues and friends at the event who managed to keep me relatively calm. That my dear friend and mentor, Seymour Stein, presented the award made the evening extra special for me.”

Tony Wadsworth, EMI, 2008
“On the night, it was a genuine surprise. Earlier in the year, I’d exited EMI after 26 years, 10 of them running the UK company.

“The last few months in the company had been weird, following the disastrous acquisition by a private equity company, which, thankfully, didn’t want me around for long. I thought Music Week were just being nice inviting me along to the awards event – and then it gradually dawned on me what was happening.

“To have a Strat is to be in pretty intimidating company, following in the footsteps of Chris Blackwell, Richard Branson, Martin Mills and many others who were such a force in the industry.

“The tributes from the amazing artists I’d been working with, and from industry colleagues, were very moving, and good for the soul, as well as the ego! It rounded off a turbulent 12 months in a very positive way.

“I seem to remember KT Tunstall, who presented the award, comparing me to the Thames Barrier - you don’t really know the details of what it does or how it works, but you’re just very glad that it’s there. I think that was a compliment!”

Fran Nevrkla, PPL, 2011
“The Strat Award means a huge amount to me. It meant joining a very exclusive club of some of the great executives of this industry - many of whom were leaders and visionaries and who shaped the business into what it is today.

“This sense of recognition from Music Week - and one’s own industry - was entirely unexpected, a total surprise and immensely humbling. I enjoyed the event enormously, accompanied by family and friends.

“The icing on the cake was when my good friends, Paul Gambaccini and the world famous violinist Maxim Vengerov, agreed respectively to host the evening and perform great music.

"For a fiddler from Czechoslovakia who came here in the ‘60s, it was a truly unforgettable occasion.”

Every Strat award winner, ever...

For everything you need to know about the Music Week Awards 2019, click here.