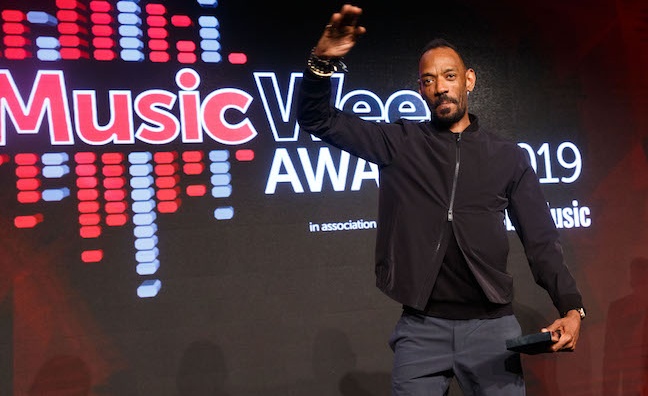 Island Records US president Darcus Beese was both the coolest person in the room at the Music Week Awards and the big winner as he collected The Strat. The ceremony was staged at Battersea Evolution and hosted by Jo Whiley.

Beese won the special award in recognition of an incredible career at Island UK over the last three decades, during which time he had huge success with artists including Amy Winehouse, U2, Florence + The Machine, Mumford & Sons, Jessie J and Dizzee Rascal, who presented The Strat.

A host of executives and artists including Sir Lucian Grainge, Bono and Mark Ronson paid tribute, while Idris Elba took to Instagram for his own message to Beese: “Congratulations on your Strat Award, man, you know you deserve it, [you’re] one of the hardest working in the game and you deserve everything coming your way.”

Fucking hell. Thank you. I don’t know whether it was a good thing to know that I was getting this, for the last couple of months it’s given me a bit of imposter syndrome. Maybe some of us suffer from imposter syndrome… [Audience silence] Obviously not! [Laughs] Wankers, leaving me hanging like that.

Mind blown. You turn up to these things, and you see people that win The Strat and [you think] there’s no way you’re going to be on the list, no fucking way. The first Music Week Awards I went to was in 1994, I was part of the Island A&R team. I thought last year’s would be my last. Then I got a call and I said to Mark [Sutherland, editor], can I call you back? I went, 'OK then'.

But even though my name is on this award, it goes without saying that I worked with some incredible, smart, creative people down the years, I got the chance to sit down today in Island Records with the UK team, with people that have been involved in the stellar success that Island had down the years. Ted [Cockle, Virgin EMI president] was there, [Polydor co-presidents] Tom [March] and Ben [Mortimer] were there, Sarah Boorman was there, the UK crew were there, my American new family were there, they’ve flown with me, Eric Wong [COO, Island], respect. LaTrice Burnette [Island EVP/GM], Lauren [Schneider, EVP, strategic media relations], thank you so much for travelling with me.

My family are here because they had to be, my wife, thank you so much. My mother is here. My father who passed away, I wish he could be here, but thank you for the DNA. My children, thank me for your DNA. [Laughs]. My children, this is all for you.

Click here for all the winners at the Music Week Awards and here for the social media reaction.

To read an archive interview with Darcus Beese, click here.