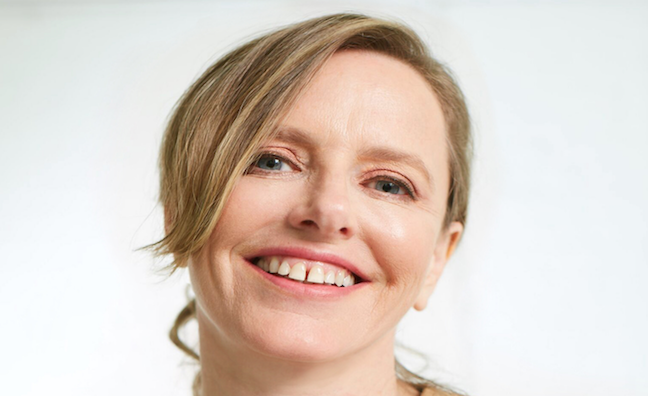 Sarah Stennett, the winner of the coveted Strat Award at this year’s Music Week Awards, hailed the “optimism we are seeing emerging in the business” during her inspiring acceptance speech.

The revered manager was honoured with the Strat Award for her outstanding work and contribution to the world of artist management. Among her current clients are international stars such as Ellie Goulding, Rita Ora and Zayn.

Prior to her speech, a host of top music biz executives honoured her work, with the likes of Access Industries founder and owner of Warner Music Len Blavatnik, Sony Music Entertainment chairman and CEO Doug Morris, Warner Music UK chairman and CEO Max Lousada and many, many more paying tribute.

In addition to thanking her various partners and colleagues from across her her career, Stennett took a moment to highlight the quality of young talent working in the music industry and the vital role of those in senior positions to help guide them in their development.

“Let’s support the young people we work with, let’s allow them to express themselves, let’s help guide them through their mistakes,” she said. “To the young people in this room who feel they can’t always express themselves in a room full of experienced executives or who aren’t always heard, to those navigating the unchartered waters of a rapidly changing industry, I encourage you to be brave, embrace your individuality and in the words of my father, hang on in there.”

You can read Stennett’s speech in full below, while the full list of winners on the night can be found here.

“Thank you so much, Len. Thank you to everyone who contributed to that video. It’s very touching.

“To be the first women in nearly 30 years to receive this award is astonishing to me, especially in view of the fact that we are all acutely aware of the enormous contribution women make to this business. I hope I am going to be the first of many more to come.

“When Mark [Sutherland] first called me to inform me that I was receiving the Strat Award, I was truly flabbergasted. I had two questions, how do you get it and how long is the speech? I’m terrified of public speaking.

“To the first he said you are nominated by your peers, so to those people thank you, it means the world to me.

“To the second, I was told between five and 10 minutes, so I tried to keep it to 5, but as usual I’ve got a lot to say so I’ve managed to cut it to 8! I thought in this time, I’d tell you how I got here, who helped me and most importantly, how I intend to stay here. I’m too young to retire.

“On reflecting upon my career last week, I found some letters that my wonderful father wrote to me in the late ‘90s. When I first moved to London, the letters were usually accompanied by a couple of tenners, because my sister and I were always running out of cash. One of the letters I found is here on the screen and asks the question very clearly in block capitals ‘when are you going to stand on your own two feet? If you cannot manage on your present salaries then I think you both should look for alternative employment.’ I was living, at the time, in a flat in Brixton and I had what seemed like a pipe dream. To work in London, to be part of the music business and to be a successful, independent woman standing on my own two feet. That was it.

“So, I started my career, like most of us do, with the support and financial help of my family to who I am eternally grateful.

“It’s not all been rosy though, there have been very tough days; days of enormous self-doubt and days that have felt like colossal failures. Some of you here have lived those days with me. The constant theme throughout my career has been the countless inspiring executives and artists who have kept me in the game, supported me and helped me keep fighting for what I believe in.

“One of the first women I met in the business was a woman called Jill Sinclair. Sadly, she is no longer with us. She started a record company called ZTT with her husband Trevor. She signed Frankie Goes to Hollywood, Seal and many others you will know. She was a larger than life character with a reputation as a really tough woman. The first time I met her was a few days after she had given birth to her fourth child. She was back in the office, with her baby in it’s crib, running her business, doing her thing. I was awestruck, the first woman I’d ever encountered in real life who had it all; a successful business and a happy family.

“The second time I met her was at an event such as this. I sat next to her by chance, I think I took Spraggon’s ticket to the Music Publisher Associations Christmas Lunch. She was so kind, she was interested in me and to my greatest surprise, had the nerve to sit and smoke a spliff in a room full of suits, without a care in the world. Nobody questioned it. They didn’t question it because she was a free spirit. They didn’t question it because she was successful. Successful on her terms, true to herself and committed to her vision.

“Since then, I have met countless individuals with that same spirit. A spirit of entrepreneurship, purpose and rebellion. I find myself drawn to those same people today. It’s very easy to dismiss such people as rebellious, disruptive and unmanageable, especially before they find success, but it is vital for us to remember that it is the rebellious original thinkers who have always moved the business forward. They have created movements; the punk scene, the Madchester scene, the hip-hop movement that have continuously energised the business.

“We all remember Steve Jones telling Bill Grundy that he was a ‘Dirty Fucker’ on live TV. A historic moment we look back at with nostalgia and amusement. But how many of us would be amused if any of our artists today told Graham Norton a similar thing?

“Many of you have been a part of the framework of my personal life and are an enormous support to me. I want to, in particular, thank Cassandra Gracey, for just being brilliant and for having stuck with me for nearly 20 years.

“Nadia Khan for talking late into the night to find ways forward in what have felt like impossible situations.

“Chloe Roberts for the constant life perspective and organisation of the chaos.

“Laura, Benedict, Jessica, Rodger, Elena, Romilda and Emily for joining the First Access team. And thank you to everyone who has worked with me or is currently working with me at First Access.

“Thank you Len for becoming my partner and for mentoring me and for being so generous with your time.

“Thank you Amanda for introducing me to Len in the belief that we would make good partners.

“A special mention to Paul Spraggon, my first ever business partner, for making our non-sober years so colourful and rich with stories that are too rock and roll to repeat here. Sober is a different kind of fun, isn’t it Paul?

“I’d also like to acknowledge the role Lucian Grainge played in my career by giving me the opportunity to spread my wings and Doug Morris, who believed in me on those days when I stopped believing in myself. Thank you to everyone who has supported me in this industry who I have not mentioned.

“On a personal note, I must take a moment to thank my husband George. He has spent at least 80% of our marriage waiting for me to get off the phone. Thank you for putting up with it. A big thank you to my sister for hours of free child care and therapy. Rose my eldest daughter and the twins Sal and Gigi, thank you for not judging my life/work balance.

“So, a moment to talk about the future. I think it’s very important for us to embrace those who think differently, the rebellious and the disruptive.

“In the noise and endless discussion around technology, platforms, streaming and market share, I feel that we may have forgotten the importance of the people. It’s the people who are at the heart of the music business.

“Through the hard financial years we have been experiencing, we have perhaps been less able to be rebellious in a way that the music business always has. There hasn’t been the money to risk. So maybe we have ended up with a business that is less exciting, less rock and roll, with less rebellion and less individuality than we would have probably liked.

“I am really excited that the optimism we are seeing emerging in the business will allow us all to take more risks with spirited, talented, disruptive individuals who can drive the business forward to new pastures and great heights.

“I will leave you with one final thought: let’s support the young people we work with, let’s allow them to express themselves, let’s help guide them through their mistakes. To the young people in this room who feel they can’t always express themselves in a room full of experienced executives or who aren’t always heard, to those navigating the unchartered waters of a rapidly changing industry, I encourage you to be brave, embrace your individuality and in the words of my father, hang on in there.

“I would like to dedicate this award to Jill Sinclair, my old friend Joanne McCormack and to all the other women who have not been recognised since 1989.”