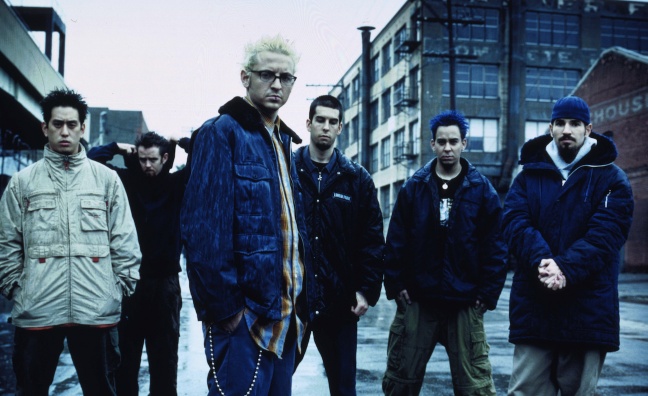 Members of the Warner Records team who have worked on Linkin Park since they first signed to the major have opened up about their groundbreaking Hybrid Theory campaign in Music Week.

Hybrid Theory is the biggest selling rock album of the 21st century and also has the most sales for a debut album this century. With more than 25 million copies sold worldwide, the record is 12x platinum in the US. In the UK, it has 1,767,870 sales to date, according to the Official Charts Company.

“We had this young band that rocketed to super stardom and global stadiums on every continent,” said Leon. “The album helped to bring rock back into the forefront of popular culture in every country in the world. It was astounding. I’d say it was one of the most influential albums of this millennium.”

“It was an extremely collaborative process, Mike Shinoda would just come by the office here and there, dropping things off,” says Maddocks, who worked closely with the singer on the iconic Hybrid Theory artwork. “Mike’s extremely focused, he’s a gifted artist and a gifted musician,” he added. “Back in the day, I was really impressed with how determined and focused he was, and at the same time open to collaboration. When you are that skilled at something it’s hard to let others in, so the fact we were able to work together is really good. It utilised both of our strengths. Getting to know him through the years and finding out how much of an amazing producer, lyricist he is has been pretty unbelievable. He’s a true renaissance man.”

Standish remembers the whole band – completed by vocalist Chester Bennington, guitarist Brad Delson, turnablist Joe Hahn and drummer Rob Bourdon and bassist Dave Farrell, who joined a little later – coming to the office every week. “They would come in once a week to this conference room, I can envisage it right now,” he says. “I have a very vivid memory of the guys coming in, I feel like it was every Friday for many weeks in the set-up of the campaign. They had an incredible work ethic and were really smart and respectful.”

Nail your imagery – and stick to your guns

Powered by the vision Maddocks and the band were developing for Linkin Park’s aesthetic, the band’s image quickly became indelible. Some of the early discussions around the band’s first promo shot were pivotal. Maddocks and Standish recall pushing hard to use a photo of Bennington where only the flame tattoos on his arms were visible, his face obscured by his hands, a mic and dark shadows. “People were saying, ‘We need to see the singer’s face, this is a new band’,” said Maddocks. “But it was such a powerful shot, it had this raw emotion. We put that out as the first image. I’ve heard over the years that people really love it and it was a good insight into Linkin Park.” Standish simply calls the shot “timeless”.

Susan Leon drove the international campaign for Linkin Park and, sure enough, the rest of the world soon caught up the booming US campaign. “At the very beginning, the aim was just to get people to believe that this band could be huge,” said Leon. “There were doubters, but none within the international department at Warner Records. We planned how to get them into the big European markets over and over again over the course of 12 months. Their second time through, we had them opening for Deftones in front of massive crowds. They were huge fans of Deftones and it was a big success. My fondest memories were looking at the international world through their eyes for the first time.”

Standish’s marketing push began with street teams handing out Linkin Park tapes to fans streaming out of rock gigs, and this tactic instantly struck a nerve. “We weren’t just pushing it to fans, the market was pulling,” said Standish. “The art they were creating was resonating with fans, that’s the bottom line. You could see it and that’s really exciting. That’s ultimately what an artist and the people who represent an artist are trying to achieve, to make that connection between art and fans. Standish added that the band never took their eye off their fans. “It wasn’t like they were trying to market themselves to meet the needs of what their fans would want,” he said. “But they always thought of what the implications might be, on so many details.”

“After a 15-hour day, they would all sit together greeting fans in every country, for hours,” Leon added. “I’d never seen anything like it.”

Any 20-year relationship between label and artist will involve strong relationships, but Linkin Park cemented theirs with Warner Records very early on. “We’ve grown up through the latter half of our lives together and got closer throughout that,” said Maddocks. “They’re just amazing human beings with everything that they’ve done with their success and all the organisations they’ve started. It’s the most successful relationship between a band and a community you could have.”

Standish, Leon and Maddocks paid tribute to Chester Bennington, who died by suicide in 2017. “Obviously, I knew Chester well, I’m feeling choked up just thinking about it, honestly,” said Standish. “This is really hard. I really miss him, it’s really sad and it’s tragic. I just have a hole in part of my heart for the loss of Chester. He was an amazing human being and an incredible father, husband and artist, too.”

*The Rock Issue is available now. To order your print copy of this very special issue, email musicweek@abacusemedia.com. To subscribe to Music Week and never miss a vital music biz story, click here.