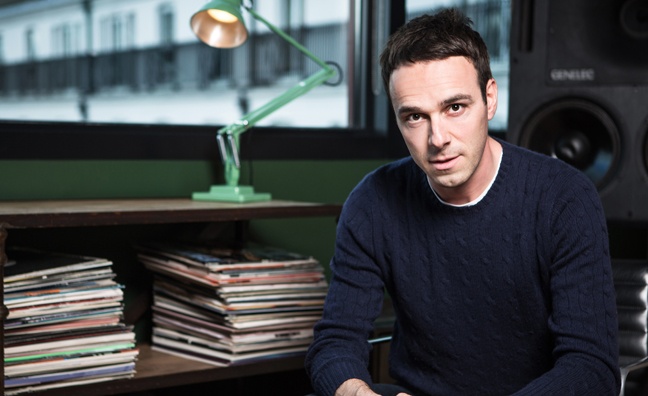 This may have slipped under the radar slightly, but Ed Sheeran sold quite a few records last week. In fact, he smashed all sorts of chart records in making his third album, ÷, the third fastest-selling of all time.

The success was also a triumph for Sheeran’s label, Atlantic Records, which ended up with a staggering 72.45% market share of Artist Albums last week, according to the Official Charts Company. Its Singles share was hardly less impressive, with Sheeran’s domination of the Singles Chart handing Atlantic a 53.04% market share for the week.

Sheeran also conquered the US and other international charts – and is heading for a colossal UK sales week two, ÷ selling 158,026 copies by yesterday’s midweek update. So Music Week sat down with Atlantic UK president Ben Cook to find out how they did it…

So, ÷ beat even the industry’s biggest expectations – did it surpass yours?

Well, we always knew it was going to be big, but did we know it was going to be this number? No. It’s been revised upwards a few times but this is sensational. It’s an amazing number and the sheer voracity and the manner with which it’s been devoured is just incredible. He’s very happy, we’re thrilled to have the third biggest week one and [it means] Ed joins the elite ranks of a few real greats.

What do you put the success down to?

Ed’s made this incredible record. It’s his best record to date, he’s delivered on that front in spades. It’s an incredible musical statement. And Ed’s always had this thing of raising the bar and beating expectations every time, and that challenges us to match that, every step. His strategy to come back on socials a year to the minute when he went off was a great statement of intent. It’s all been very deliberate; it might not have looked like that but [the intent was] to produce a release plan that’s really forward-facing and inclusive. This album’s called Divide but there’s been no divide about the manner in which Ed interacts with his fans and in which this record has been delivered, it’s been remarkably inclusive.

People do seem to have connected with him, not just with the songs…

He has that amazing ability to strike a chord with deeply personal, intimate lyrics and songs; but they also have a way of touching millions of people. It’s a very rare and special talent.

How crucial was the double single drop with Shape Of You and Castle On The Hill?

He’d been away for a year, off social media, and he produced an incredible record that had all these rich songs and all these different musical languages. What we really wanted to do was not stick to one particular sounding record. The combination of Shape and Castle signalled this rich divide between his different musical characters and that was a really powerful message to send to people.

Obviously, the UK is incredible, the singles chart [domination] is a historic moment for Ed. But around the globe, on every metric, Ed is continuing to grow by some margin in every territory. It’s incredible to see an artist on their third record continue to build their career and footprint.

The sales have also been huge across all formats…

Physical is not to be forgotten. Ed manages to sell across everything. That inclusive mentality feeds back into that; it’s not just downloads, CDs, streams, views, tickets or merch – it’s a very wide, rich base of people buying into Ed.

That said, is ÷ the first true album streaming megahit?

I guess so. There’s a rare number of artists that are really being consumed at album level [on streaming] but Ed has always been inclusive on all platforms and, on top of it being a incredible record and the launch being so exciting, it’s just driven this pivotal moment culturally.

Where do you go next with the campaign?

Well, we get very excited for a minute or two! Then, there’s a clear plan for the next 12-18 months, as on X or +, to ensure we’re able to tell the whole story of this record. It’s got all these rich paths to it that we want to make sure everyone hears. So we’re going back to the plan. There’s a very robust, long-term vision for this record and we’re excited to see what else can be achieved.

Have you learned anything from all of the album tracks ending up in the Singles Chart?

Definitely. There’s a lot more data and information flying at us. We and Ed have strong ideas about where we should be going next. Galway Girl’s looking like a runaway record here, there’s no denying that. But we’ve got to be led by what the important moments on this record are for Ed.

Apparently, Ed thinks he can sell 20m copies of this album worldwide. Do you agree?

(Laughs) I don’t know. The last few weeks have been really interesting in terms of the UK album chart, with different artists delivering real volume. People’s tastes and interests have been piqued and we’re really excited about that. If you’ve got an amazing record and put yourself in the right position, then you’re in a good place. And Ed’s made this incredible record. It’s a landmark record, it feels very now but it’s also timeless.

Can other people learn from what this album has done?

This is a one-off moment for sure. Ed’s a student of the charts and the industry, as are we. But he’s a remarkable person. That feeds into this as well, no matter how driven/talented he is, he still carries himself with great humility. He’s the same kid that we signed six years ago.