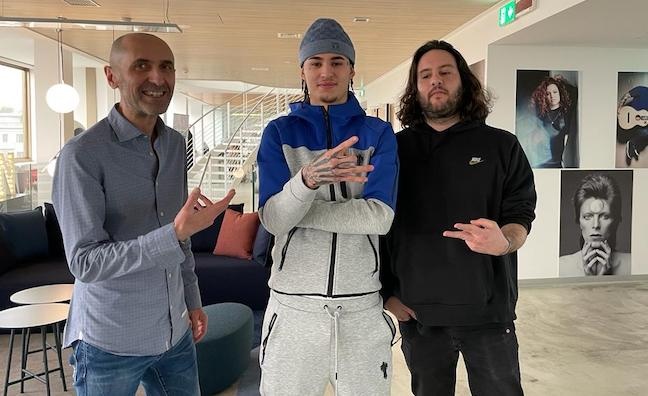 He is best known internationally for Eurovision, his recent collaboration with fellow Italian rapper Baby Gang and the UK’s Central Cee. Rondodasosa also teamed with Central Cee on Movie.

Rondodasosa is the stage name of Mattia Barbieri, a Milan-born rapper who shot to prominence in Italy with his debut single Free Samy, which racked up more than half a million views on YouTube.

His track Louboutin, a collaboration with rapper Vale Pain, went viral. Inspired by US drill music, it drew comparisons to Pop Smoke from critics.

Rondodasosa’s track Slatt generated more than 26 million streams on Spotify and helped gain a foothold in the US and UK markets.

Eurovision features on Central Cee’s 23 mixtape, distributed by Warner Music’s ADA division, which reached No.1 in the UK. The collaboration helped it enter the Italian albums chart in the Top 30, making the country one of the first outside the UK where Central Cee has charted.

Rondodasosa said: “I’m really happy to sign with Warner Music. The team in Milan have been behind the careers of some of the biggest rappers here in Italy, but they’re also plugged into a global network that’ll help connect me with new audiences worldwide. My recent collab with Cench shows drill is becoming more global than ever and the opportunities are almost limitless.”

Marco Alboni, chairman and CEO, Warner Music Italy, added: “It’s great to welcome Rondodasosa to the Warner Music family. He is a standout talent who has already built a huge following and I know we can help him take his career to the next level. Artists can’t wait to work with him and we’re already talking about some super-exciting projects.”

The signing comes at a time when the Italian music business is growing strongly. Figures from industry body FIMI showed the market increased by 27.8% in 2021 to hit a total value of €332.1m.

Much of that growth has come from streaming, with Italian hip-hop fans being keen users of the streaming format.